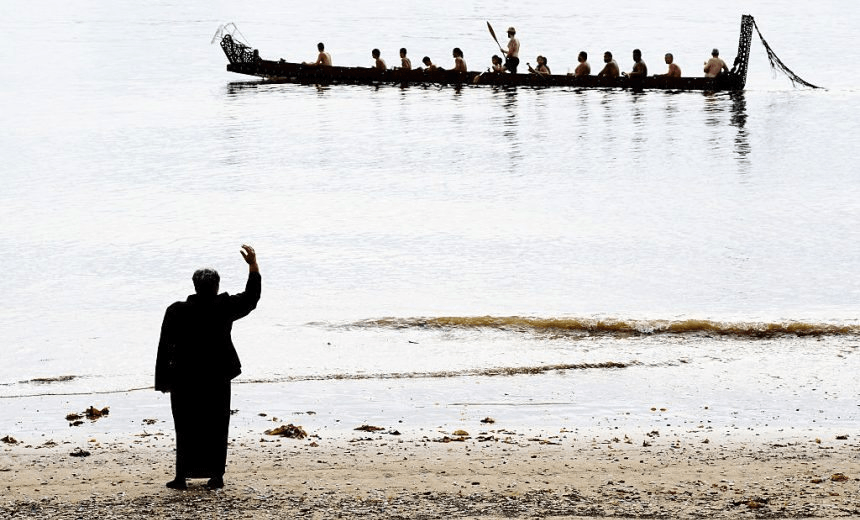 WAITANGI, NEW ZEALAND – FEBRUARY 06: Waka are welcomed to the beach on February 6, 2016 in Waitangi, New Zealand. The Waitangi Day national holiday celebrates the signing of the treaty of Waitangi on February 6, 1840 by Maori chiefs and the British Crown, that granted the Maori people the rights of British Citizens and ownership of their lands and other properties. (Photo by Cam McLaren/Getty Images)

Waitangi delivers conflict, tension, discomfort. And it is essential for our collective soul

WAITANGI, NEW ZEALAND – FEBRUARY 06: Waka are welcomed to the beach on February 6, 2016 in Waitangi, New Zealand. The Waitangi Day national holiday celebrates the signing of the treaty of Waitangi on February 6, 1840 by Maori chiefs and the British Crown, that granted the Maori people the rights of British Citizens and ownership of their lands and other properties. (Photo by Cam McLaren/Getty Images)
Opinion

Today the prime minister should be at Te Tii Marae, leading our nation on the difficult path, and not back to Disney Treatyland, writes historian Hirini Kaa.

“A lot of New Zealanders cringe a bit on Waitangi Day,” said the prime minister recently. This was wrapped around a bunch of language including terms such as “New Zealand” and “pride”. Like all modern politicians we can assume Bill English’s language is fairly well poll tested before he unleashes, so it’s both fair to parse his words and to assume they give an indication of where his voters sit.

By “cringe” he may have meant that his voters have a physical reaction from discomfort or embarrassment at what they see on their screens and hear on their talkback radio. Interestingly, it’s the opposite reaction to the pride he talks about. Cringe, though, is an interesting word. Cringe can also mean an involuntary physical reaction to an uncomfortable memory. Now that’s a meaning I can get hold of. Why would we be uncomfortable at our memories? Why would we cringe around our national day?

Let’s look at some history. The Treaty of Waitangi largely disappeared from Pākehā consciousness from the 1860s. After the invasion of Waikato and “The Great War for New Zealand”, the eventual defeat of major Māori military opposition to the settler state meant the imposition of full colonisation. The principle of partnership enshrined in the Treaty vanished, buried in an avalanche of legislation, regulation, state violence and the raw greed and brutality of the settler state. By 1877 the Treaty was declared in the courts a “simple nullity” and was rarely heard from in Pākehā circles. The Treaty was breached.

Māori, of course, maintained a strong Treaty discourse. Iwi fired off thousands of petitions to parliament, presented legal challenges to the courts, established political and prophetic movements based on the Treaty and even sent important delegations to plead the cause in England. Although there was no single Māori take on the Treaty, it was still held up by iwi as a constant, central political and spiritual cause.

In 1911 at the Festival of Empire in London, New Zealand was desperate to make its case as the Little Britain of the South Pacific. It rolled out the Treaty as a showcase of our Empire-leading race relations. The Treaty was, according to the government spin at the festival “practically the only compact between a civilised and an uncivilised race which has been regarded and honoured through generations of difficulties, distrust and even warfare …” Whatevs to that.

In 1932 the then Governor-General Lord Bledisloe had bought the 1000-acre Waitangi Treaty grounds and British Resident James Busby’s house was built anew as the “Treaty House”. At the huge opening in 1934 the current pattern was set of welcomes and festivities at Te Tii Marae followed by ceremonies and flags up at the Treaty Grounds. About 10,000 people came to the first opening, including King Koroki, which was a sign of hope for those iwi who were actively in decades-old negotiations for the settlement of confiscation by the Crown.

Other major occasions of the time included the opening of the Whare Rūnanga in the upper grounds as part of the centenary events in 1940, and the visit of the newly crowned Queen Elizabeth II in 1953. This visit gave real credence in Pākehā public perception to both the grounds and to the Treaty.

Unfortunately, of course, these were Disneyesque images of a nation that the Pākehā public were latching on to. Far from the Treaty’s true meaning as political, economic and social partnership, the Treaty was held up as a symbol of the supposed excellent state of New Zealand’s race relations. The Treaty and the Treaty grounds, and (soon enough) Waitangi Day itself amounted to New Zealand’s Small World – the all, singing, all dancing distraction from the reality of our race relations.

Meanwhile, in the other world, the real world, Māori remained marginalised from the growing economic wealth of post-war New Zealand. Denied their land base, Māori were soon forced into cities to be fodder for new industries. Māori were promised state houses as a “new turangawaewae” while being discriminated against in employment, education and society in general.

A new urban generation gained new tools of analysis. Inspired by their elders, they took on fresh forms of the ages-old protest movement including starting to focus on Waitangi. They brought these actions into Pākehā public consciousness, and the Pākehā response was WTAF (or: that’s quite unbelievable!). This reaction was partly due to selective memory; the great Apirana Ngata had challenged the Disney Treaty in 1940 and it was ignored. Now it was back …

Probably the most testing part of this protest was its challenge to the nature of New Zealand and the idea of “nation”. The deep historical and structural roots of injustice were slowly being displayed and Pākehā were increasingly unable to look away. Not only were there some savvy and well-educated media types in the mix, but the conflict and drama just made for too enticing broadcasting. It was like watching the Trump slow-motion car-crash – we just couldn’t look away.

Unlike Trump, though, this had a purpose. Pākehā New Zealand was forced, even if only for one day a year, to confront their demons. At first they thought the demons were the activists. They named them, and they hated them. The prime minister became a kind of Pākehā exorcist, determined to drive them out: “in the name of George Grey we compel you! Out you wreckers and haters!”

Soon, however, with the help of excellent scholarship and some enlightened educators, more and more Pākehā began to understand that Māori were actually asking to fix a broken system. It was more complicated than the constant media portrayal of Māori as lazy bludgers dragging the nation down through their bad choices. Racism was actually a thing. History was actually a thing. Egalitarian No-8-wire-fair-go-she’ll-be-right-mate New Zealand was not actually the thing they thought it was.

We need to keep this pressure on ourselves. Not enough of us know these things. Not enough of us understand that, despite some broadcasters’ and spin doctors’ wishful rhetoric; we still have a long way to go. The tension and conflict at Waitangi is still useful for our collective soul. We need to be uncomfortable with our National Day because the reality is painful.

One day, hopefully soon, maybe we can all sing Kumbaya in te reo and be kind of awkwardly proud of our society. (I’m pretty sure our symbol of national pride won’t be flags and fireworks but jumping eyebrows). And, sure, part of getting there is having a great Waitangi Day with friends and whanau, being part of your cool community funtimes.

But not yet prime minister. Not while Māori continue to be marginalised in this land. Not while systemic injustice prevails. Not while our history is known by too few. Sadly it probably won’t be on his watch, even though he has done some of the work to get us there through settlements and his own personal commitment to the issues. But for now he should go to Te Tii and lead us on the difficult path, not back to Disney Treatyland. That’s the wrong sort of cringe entirely.

Dr Hirini Kaa is a lecturer in History at the University of Auckland. His paper Waitangi: Treaty to Tribunal will be offered in the second semester 2017.