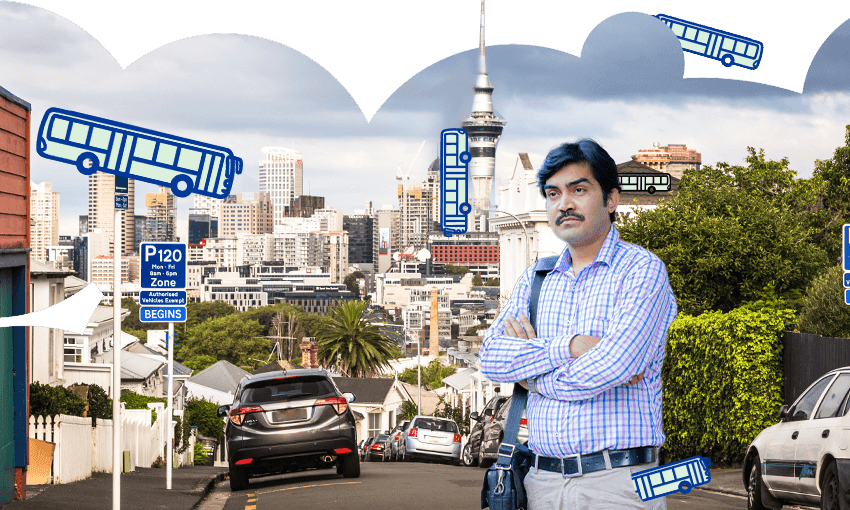 Fed up: This public transport user has had enough with Auckland Transport’s dithering on making the city work for non-motorists (Photo: Getty Images; photo illustration by Tina Tiller)

Fed up: This public transport user has had enough with Auckland Transport’s dithering on making the city work for non-motorists (Photo: Getty Images; photo illustration by Tina Tiller)

The Herald has repeatedly raised concerns about Auckland Transport’s ‘radical plan’ to remove parking on 3.25% of roads over a decade, saying it could kill local businesses. Hayden Donnell suggests a different perspective.

A high-ranking bureaucrat at Auckland Transport says the council-controlled organisation is pushing ahead with a radical plan to retain kerbside parking on 96.75% of its roads over the next decade, despite urgent calls to reduce traffic deaths, congestion, and transport emissions.

Under the controversial parking strategy, AT is promising to keep on-road parking on all but 240km of its 7600km network of local roads for the foreseeable future.

Parking would only be removed to make space for dedicated public transport and cycle lanes on arterial routes following lengthy consultations with the city’s most change-averse residents.

At a meeting of Auckland Council’s planning committee last week, councillors voted 13-10 to endorse the strategy for public consultation.

Several commentators are concerned the plan doesn’t go far enough to help local shops struggling with inflation and the loss of trade caused by Covid-19, and more parking needs to go for business to thrive.

Deputy mayor Bill Cashmore told The Spinoff that AT needed to repurpose land currently used unproductively for parking in order to get customers to shops more efficiently.

Councillor Richard Hills said reallocating carparking to public transport and cycling was the only way to address congestion without widening roads, which studies have shown eventually makes traffic worse.

He pointed to Karangahape Rd, where businesses reported an upturn in profit following a $30 million cycling and walking upgrade.

“I think if you think about the other way: would you put car parking on the Northern Busway? Would you put carparking on our motorways? Would you re-add car parking to roads like Fanshawe St? It doesn’t make any sense. People would be up in arms if we started putting car parks in the places where we’ve removed them. Unless we keep knocking down houses and widening things which we know creates more traffic problems, then this is how we have to do it.”

“With the city empty and everyone working and learning from home, making access to the city and the shop is more important now than ever. Change literally can’t come soon enough.”

Some business owners remain concerned that AT is looking at taking away any parking at all.

Butcher Phill Pirie told the Herald he was concerned the plan will prevent drivers stopping on the busway outside his store to pick up their bags of meat.

Emma McInnes, one of the founders of Women in Urbanism, told The Spinoff she disagreed.

“Why do private vehicles get VIP parking outside the door of businesses, when buses carry more customers, many of them people who are made vulnerable by poor city planning?

“As a mother, I rely on my bus to move around the city. And I rely on it being on time so I can make it to appointments, and do all the other admin that comes with being a mum. I don’t want to spend most of my day travelling in a bus that’s stuck in traffic, where the baby cries.”

Melbourne has been hailed as one of the world’s most liveable cities after creating a series of tram and pedestrian-priority streets across its centre.

Paris has removed 70,000 car parks – or 50% of its total number – in three years. The move has been credited with driving an ecological transformation and revitalising the city.

Councillors’ decision to back AT’s much more modest plan fits uncomfortably with the more ambitious goals of Te Tāruke-ā-Tāwhiri, the climate plan they passed unanimously in 2020.

It calls for transport emissions to reduce 64% by 2030, mainly through encouraging people out of cars and into other transport modes like public transport, walking and cycling.

Two people have died in cycle crashes in Auckland in the last month. Levi James, 19, was killed on the approach to Royal Oak roundabout while riding to visit his grandmother on March 5.

The stretch of road has been the subject of safety concerns for years, and transport advocates have speculated that James may have been swerving to avoid the door of a parked car when he was hit.

A cyclist was also killed yesterday on Marua Rd in Mt Wellington.

McInnes said that would continue as long as the vast majority of roads remained dominated by cars and parking.

“I want to be able to cycle to my local bakery without wondering if I’ll be the third cycling death on Auckland roads in the last 30 days,” she said.

Jolisa Gracewood, a writer and former communications director for Bike Auckland, said businesses would benefit more from creating safe spaces for cyclists, pedestrians, and non-drivers including those who were elderly or disabled, than from preserving parks.

But even if that wasn’t the case, lives would be more important than maintaining convenience for drivers, she said.

She suggested calling off our ill-informed media-driven fight over a small minority of kerbside carparks, and focusing instead on bigger issues.

“We no longer sacrifice human lives to ensure successful crops. No way should we be doing it to ensure successful shops, even unintentionally,” she said. “We can do so much better for each other than a last-ditch battle over a handful of parking spaces while the world burns.”