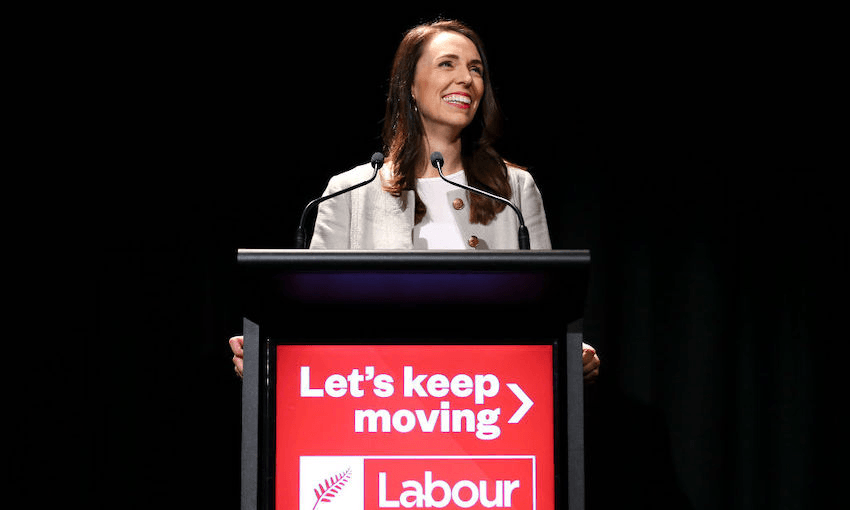 Jacinda Ardern looked to slap a Labour sticker on the team of five million with the launch today of the party’s Covid-19 recovery plan, at an event which serves as the unofficial kickoff to the election campaign.

In less than three years in the top job Ardern has faced a litany of calamity, including a terror attack, a volcanic eruption and a global pandemic. She was introduced today as “New Zealand’s saviour”, an honour she later said she would not use to describe herself. Speaking at Te Papa to about 570 party members, a sea of red Labour t-shirts and signs, Ardern said the party was indispensable to the country’s wins over the coronavirus. She said New Zealand now needs more Labour.

Yesterday the party’s election slogan, “Let’s keep moving”, was unveiled. Today, addressing the party faithful, Ardern said that Labour needed three more years. “Don’t put on the brakes when now more than ever is the time that we need to speed up.”

Labour’s official campaign launch is planned for an August event in Auckland.

In the audience, members whispered about whether there might be an opportunity for the party to govern alone following September’s election. The celebratory mood today follows months of sky-high polling on the back of Ardern’s handling of the pandemic. It’s quite a turnaround for a party which, as the prime minister joked today, has struggled in the past to attract enough people to qualify as a “mass gathering”.

While Ardern said no playbook exists for the response to Covid-19 or a recovery from what is expected to be the worst economic downturn in nearly a century, she said she was drawing inspiration from the country’s first Labour government and prime minister Michael Joseph Savage’s response to the Great Depression.

Much of Labour’s recovery plan was released months before Ardern’s speech, at the budget launch in May. The plan is based on the word at the centre of Ardern’s political vocabulary: kindness. There are no cuts to public services, massive new investment in infrastructure, a series of funds to help business, and a $1.6 billion investment in apprenticeship programmes. The opposition has criticised Labour’s plan for adding too much debt to the government’s books and trying to dictate an economic recovery from the prime minister’s office. New Zealand’s government debt is expected to more than double over the next four years.

“We must be mindful of the debt that future generations may carry because of what we need to do now,” said Ardern. However, she warned a different type of debt would be created in dilapidated schools and overwhelmed hospitals, in the form of persistent poverty and unemployment.

National’s first election slogan, “Strong Team. More jobs. Better economy”, was unveiled a few weeks ago. According to National leader Todd Muller, Labour has shown it isn’t the right party to fix the economy. His strongest argument can be summed up in one inelegant word: KiwiBuild.

“Nothing Labour promises you this election will be delivered, except more tax for you to pay. Labour promised three years ago to ‘Let’s do this’ and hasn’t done any of it,” Muller said in a statement. In the past he’s called the current government “clumsy and incompetent”.

Ardern’s government has struggled with big projects run out of the ministerial headquarters around the Beehive. The prime minister’s marquee project of building light rail in Auckland is derailed and going nowhere. KiwiBuild, Labour’s big housing programme, is expected to deliver fewer than 1,500 homes in its first three years. The target was 16,000.

There were two minor announcements included in Ardern’s speech at Te Papa today. The government is extending a small business loan scheme to the end of the year, and is funding 23 new environmental projects focused on waterway clean-up, native bush regeneration and pest control.