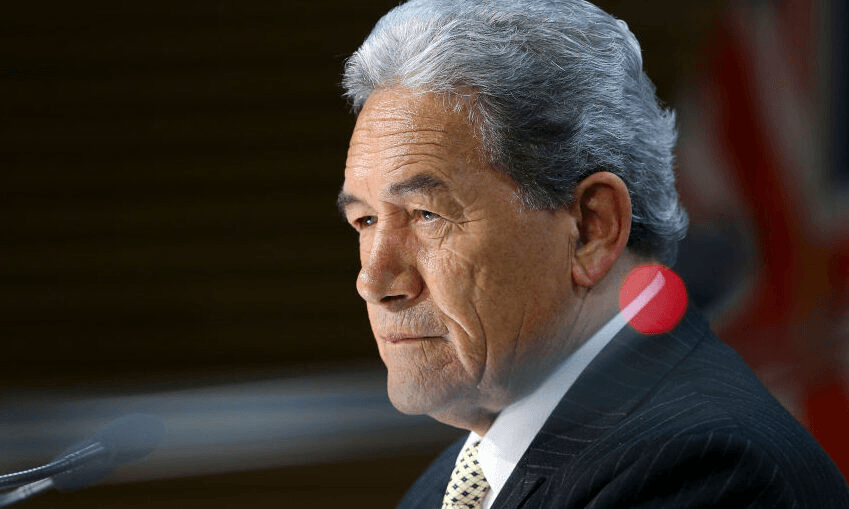 After the Spinoff recounted Leave.EU heads telling Britain’s Daily Telegraph they had ‘dispatched’ a team to Auckland to work with NZ First, the party leader issued a deeply curious statement.

The day began with news that the “bad boys of Brexit” were back and they were coming to New Zealand.

The Daily Telegraph, newspaper of choice for the British Conservative establishment, reported overnight that the New Zealand First Party had hired a crew of political operators from one of the most aggressive and controversial groups in the Brexit campaign to create “mischief, mayhem and guerrilla warfare” in the leadup to the September election.

The report came one week after The Spinoff revealed that Arron Banks, bankroller of Nigel Farage’s nationalist UK Independence Party as well as the unofficial and highly provocative Brexit group Leave.EU, had become an ardent champion of New Zealand First, effusively praising Winston Peters online. The UK-based group, created to advocate for Brexit, had posted numerous memes celebrating Peters over the past weeks. New Zealand First did not return 15 requests for comment on the nature of his relationship with Banks, but called him a “top bloke” in a tweet posted after the story was published.

There was silence until the Telegraph reported early today that a six-person team from Banks’ Leave.EU has been “dispatched to Auckland” to work on New Zealand First’s campaign. According to The Telegraph’s chief political correspondent, Christopher Hope, the team had been instructed to double the party’s count of MPs to 20.

The story directly quoted Banks and Andy Wigmore, one of his main lieutenants. Wigmore told the newspaper: “I’m going to be on ground in New Zealand causing trouble – mischief, mayhem and guerrilla warfare in the New Zealand election – the bad boys are back.”

The Spinoff in turn reported the developments from the UK this morning. Both Banks and Wigmore retweeted The Spinoff’s story.

Peters, who is New Zealand’s deputy prime minister, then chose to respond. In a statement he snubbed the venerable British broadsheet the Daily Telegraph (established 1855), however, choosing instead to focus on the New Zealand site The Spinoff (established 2014) in a statement issued this afternoon.

“The clickbait journos can’t help themselves,” he said, describing the story as “rubbish”.

“Not only have I not hired such a crew but it is impossible to see how they would even gain entry into the country,” added Peters.

Minister of immigration Iain Lees-Galloway had earlier confirmed as much, telling The Spinoff that no exemption to New Zealand’s strict border controls exist for self-styled “bad boys of Brexit” or political strategists.

“Immigration New Zealand considers applications based on the border exceptions criteria. There are no criteria that would fit this situation,” said Less-Galloway.

Banks spent the first five months of 2020 in Auckland, arriving in the country before Covid-19 travel restrictions came into effect and only returning to the UK a few weeks ago. Both he and New Zealand First have declined or ignored numerous requests from The Spinoff to describe their work together.

Speaking to the Telegraph, however, Banks claimed that the Brexit group’s “top social media team and data experts” would be sent to do creative work, while he and Wigmore would provide Peters with “strategic advice”.

According to Peters, he and Banks have known each other since the 2016 Brexit campaign. “We have been happily sharing thoughts and ideas on international matters ever since,” the NZ First leader said in a tweet last week.

Banks told the British newspaper that prime minister Jacinda Ardern, whom he called “Jacinderella” was being groomed for a job at a supra-national body such as the World Health Organisation.

Ardern told reporters at an event in Auckland on Tuesday that she has no plans to leave her current job. Police minister Stuart Nash interjected with “I hope not.”

The prime minister said her deputy’s choice of who to hire for his party campaign was entirely up to him. “Ultimately we’ll all campaign in our own way. I wouldn’t necessarily make an assumption that someone offshore who’s touting for work is ultimately to do what they claim,” she said.

Gerry Brownlee, a National MP and the chair of the party’s campaign, said the Leave.EU claim about sending operatives to New Zealand is hard to believe.

“The bad boys are back? Who do they think they are?” he said. Brownlee added that it would be ironic were a nationalist party like New Zealand First to bring in foreigners to run their social media campaign.

“There’s a real cowboy flavour to the way this guy is representing himself. With those childish quotes we wouldn’t be concerned, but it would be something the voter would need to put up with,” he said.

Peters has also had praise in the past from the former head of UKIP, Nigel Farage. The two men bonded over cricket and a political platform built on opposition to immigration. They also share a relationship with Banks, who helped underwrite much of Farage’s career.

Banks made his money through his ownership of insurance companies. He also owns African diamond mines. In 2017, Britain’s Sunday Times said he was worth about NZ $480 million. His donations to the pro-Brexit camp are considered the largest contributions to a political campaign by an individual in British history.

Leave.EU, through its use of social media and attention-grabbing campaigns, was central to turning the Brexit vote into a question where British voters could express a grievance with the way the country was changing. Opponents saw it as a way of expressing xenophobia through the ballot box.

Banks and Peters appeal to a similar demographic, said University of Otago law professor Andrew Geddis, but that doesn’t mean Banks should be invited into New Zealand’s political system.

In the first Spinoff article on the subject last week, I noted that a combative press release from Peters in June, in which he decried the “woke generation” after the statue of John Hamilton was winched from the central square of Hamilton was “blunt, edgy and controversial”.

Peters also asked in that release after the statue’s removal: “Why do some woke New Zealanders feel the need to mimic mindless actions imported from overseas.” In his parting words, Peters said the woke generation need to: “Deal with it, grow up and read a book.”

In his idiosyncratic statement today, Peters said that the original story from The Spinoff had left “a very disappointed NZF staffer” who felt that their statement had been attributed to Banks’ influence when they “wrote that press release, all on their own”.

It was never The Spinoff’s intention to attribute that writer’s work to Banks, not least because the now disappointed writer manifestly wanted their work attributed to Peters.