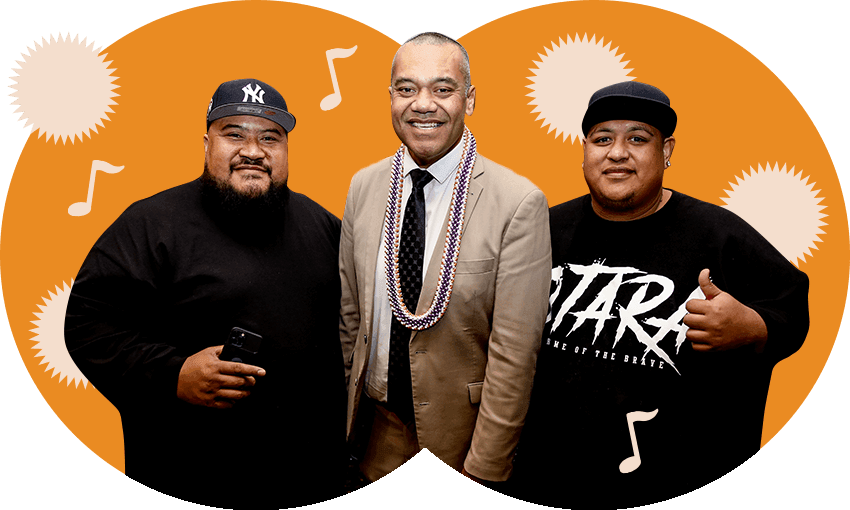 The Church Boiiz have done it again with a new tune for Auckland mayoral candidate Efeso Collins that rivals its predecessor in the earworm stakes.

Over the weekend, a familiar tune was played during the sold-out Auckland mayoral campaign fundraising dinner for Fa’anānā Efeso Collins.

It was a rendition of the 1969 song ‘Na Na Hey Hey Kiss Him Goodbye’ by American pop band Steam. The catchy lyric has since been used on many occasions. Chicago White Sox organist Nancy Faust played it for fans in the stands in 1977 against the Minnesota Twins. The crowd sang “Minnesota, Minnesota, hey hey hey, goodbye,” as the White Sox took out the four-game series.

The song has also been sung by crowds at political rallies, to taunt political opponents or to drown out and mock disruptive counter-protesters. At presidential inaugurations in the US, audiences chanted “Na na na na” to the departing presidents George W Bush, Barack Obama and Donald Trump respectively.

Earlier this year I uncovered the back story of Fa’anānā Efeso Collins’ 2013 local election campaign jingle, put together by The Church Boiiz and based on a sample of a track by South Auckland hip hop artist Devolo.

A couple of weeks later, the YouTube video at the centre of the article was removed. One of the musicians behind The Church Boiiz, Vinny Niutama, says although they got the green light from Devolo’s label Dawn Raid Entertainment, they still needed approval from Sony Universal, which has the legal publishing rights to the song that was sampled. Sony Universal has yet to respond to The Church Boiiz’ formal request.

So last week, The Church Boiiz performed to a crowd of Collins’ supporters a new unofficial jingle that samples the Steam classic: “Fa’anānā, Fa’anānā, Efeso, Collins.”

Team Collins says the jingle will be performed by the rappers at certain campaign events, but it’s not an official campaign song for the candidate. Niutama says they’re aware of what happened with the National Party and Eminem in the past and are keen to avoid that situation. They have yet to get clearance from the record label for sampling the Steam track.

Niutama says this performance is a dedication to Collins and their long-standing friendship. It’s a song that’s reflective of Collins’ journey and representative of the community he comes from – “If you’re against us, you’re just a hater. It’s time for a change that is greater.”

After the success of the 2013 jingle, the Church Boiiz had a lot to live up to with this year’s tune. Niutama said the idea came from a random brainwave of singing Collins’ matai name, Fa’anānā, to the tune of ‘Na Na Hey Hey Kiss Him Goodbye’. “Everyone knows the chant and so that’s why I thought it’d work,” he says. The instrumentals for the two verses were produced by Niutama from his home studio.

Having been compared to Obama in the earlier tune, the praise Collins gets in this new jingle is more locally focused – he’s described as the next chief of Auckland (a reference to his Sāmoan chiefly lineage), and a modern-day Peter Pan, referencing the character’s leadership of the Lost Boys in Neverland. He’s “down for the people” and “brings people together, that’s unity”.

The second verse digs deep into Collins’ core traits. “Educationally available, spiritually sound,” speaks to his masters degree in education and his Christian background. “Pacifically found” needs no explanation, as Collins has been advocating for the Pasifika community in Tāmaki Makaurau for over a decade. “Reliable, relational, politically crowned,” is belted out by rapper Karl Tusini-Rex as the reason people should “vote Efeso” as “he’s the man, mayor of the city, ’cause he can”.

Niutama praises his rap partner Tusini-Rex for adding wisdom to the track. “You get to know who Efeso is as a person during Karl’s verse, which complements the first verse that I do, which is focused on hyping Efeso up – very bold messaging about the campaign and what we would like the public to do,” Niutama says.

Earlier this year, Collins told me he didn’t ask The Church Boiiz to create another jingle for this campaign, nor did he breathe down their necks as they wrote the lyrics. “We are like brothers,” Collins tells me. “They offered to do this and I couldn’t say no. I knew whatever they were going to create, it would be fun.”

In a statement, Collins gave props to The Church Boiiz, sharing details of his relationship with the duo. “They’re two amazing guys who I mentored as a youth worker – but I can’t take much credit for their incredible talent or the amazing leaders they have become. Therefore, it’s very humbling that they would dedicate this song to our movement – and we will do everything we can to live up to the song’s high praise of our campaign, as well as deliver on the aspirations their community has for a better connected, more inclusive city.”