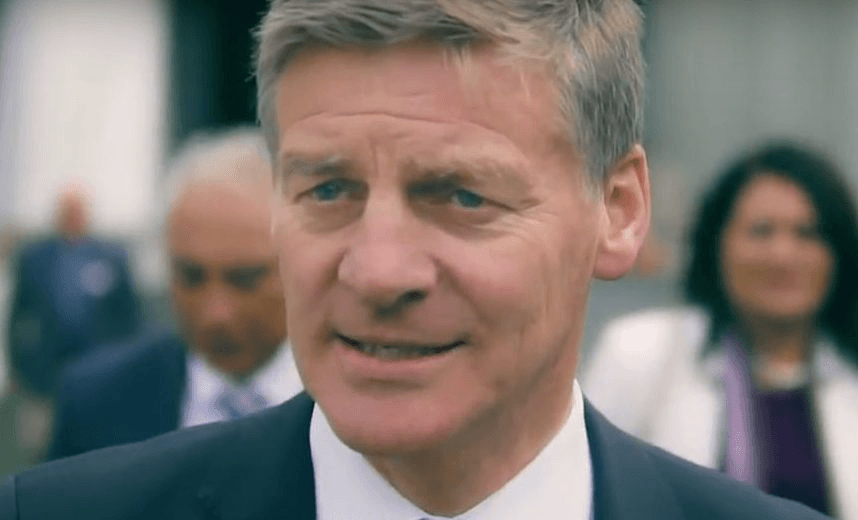 Forget ‘Get Together’ platitudes. Here’s what Bill English really should be telling NZers

The spotlight has been on a Labour Party replacing both its leader and its slogan, but National’s campaign message could do with a rewrite, too, argues tech entrepreneur Derek Handley.

There’s no hope for New Zealand in National’s first campaign ad. Who needs it when everything is perfect?

The government’s first clip for the upcoming election, ‘Get Together’, is labelled an ad but feels more like a slow-moving-short-web-movie-vignette of just how amazing and perfect we all are. Farmers farming farms, kids being kids, builders building buildings, fishermen catching fish, fruit pickers picking fruit – topped off with campfires on the beach, boys scoring tries, robotics in the classroom and lattes in Britomart: New Zealand 2017.

It doesn’t provide for much hope for the country or New Zealanders because, guess what – we don’t need it as it’s all just going so well. You only need hope when you can imagine a better tomorrow. Or if you really need one. But seems like we’re good for now.

Cut out of shot are the 1.4 billion plastic bags polluting our landfills and coastlines that we don’t have the wherewithal to ban or tax. The 30,000 new builders we need to dampen house prices and drive up supply. The waterways that are polluted by the same agricultural industry we’ve decided will take 23 years to make 90% good enough. The emissions trading scheme we need but are too afraid to talk about, the paycheck of some of those field workers who are earning less than $5 an hour picking those same apples, or the health and obesity crisis that is curtailing the prospects of so many of our kids.

New Zealand is a safe, fair and beautiful country – compared to the viciousness of life in many parts of the world we have it so lucky. But it’s a little disappointing to see that the best a party that’s been in power for nine years can come up with is that we need to “get together”. Yes, we probably do need to get together more. To talk more about what’s really going wrong, be faster to admit when things aren’t going right and be creative and courageous in designing ways forward to make things better. What we probably need is to get together in acknowledgement of where we really are and to be inspired by more vision, more boldness and more leadership of where we can go together to build a country we can all be proud of.

The current government has been exceptionally slow to acknowledge a series of challenges that we are facing as a nation, and has historically wasted record high favourability ratings which could have been used to lead us in bolder directions and take strong action. It doesn’t look like this time around is going to be very different.

Sometimes people need to be inspired to believe something is possible, such as a carbon free economy. I’m confident that New Zealanders, when catalysed, would rise to the challenges of seemingly impossible tasks such as eliminating poverty. But it seems that the current status quo is that it’s up to parties and people around the fringes to provoke and promote such ideals. An incumbent government which so many Kiwis trust and believe in has had the cultural capital for many years now to make big moves, but won’t. Or at least it won’t make the moves we need until the very last minute, as we’ve seen from the recent near billion dollar support package for an Auckland housing crisis that never was one (until it was). The style – and you could cynically argue, the shrewdness –of the timing of decisions and policies betrays a reactive “just-in-time” philosophy that finally offers up the carrot only at the very moment when people might be getting ready to leave you.

We live in a world where information travels immediately and vividly. We can see in an instant what the most progressive and inspiring cities, nations and leaders are doing across the planet. It’s hard not to wonder whether there’s a Great Firewall of New Zealand around the Beehive that stops this inspiration and vision from flooding in.

That New Zealand isn’t being led in a way that wants to shape this century, not just be a part of it – to be at the forefront of all the progress we know we are capable of in this generation – is hard to swallow. Many of you will instantly know what I mean, and will conjure up a myriad of ideals and aspirations that while we’re alive and here, we – New Zealand – might as well as hope for. A script rewrite for National’s campaign ad I could get behind might be a little more something like this:

Hello, I’m Bill English, the prime minister of New Zealand. If you elect me in September you are backing a mission towards a fully sustainable, carbon free, waste free and poverty free New Zealand by 2035. We recognise that we are unable to continue to carry the environmental costs of some of our major industries that have made us great and who we are – and we are committing to a road map to reversing this to prepare those industries for new forms of innovation and prosperity over the coming decades.

We understand that many New Zealanders are struggling with their mental health and that we have horrific statistics in suicide and depression – this will be a key priority for our next term. We recognise also that under our watch thousands of people are going in need daily and homelessness has become a visible sight in our towns and cities – while many of us are doing better, there are many who we are also leaving behind. This can not go on.

It’s not going to be easy, but it’s the perfect time to invest the billion dollar surplus we have helped the country achieve this year and the $3 billion we hope to achieve next year not in tax cuts for the better off, but in the pursuit of smart, long-term investments to tighten and bind the fabric of our nation.

A lot of things have been going really well for us lately, but a lot of things are starting to concern us all – and now’s the time to tackle them head on. We have been in government for nine years and you haven’t heard us talk like this before. To be honest, that’s because we have chosen to prioritise management, but this style is not fit for where we must head; now it’s time to lead. Continue to put your trust in us. Now is the time to be unafraid to dream the dreams that ensure we truly live up to the New Zealand we all know in our hearts is possible. If we come short shooting for the stars, maybe we’ll hit the moon.

So let’s get together and get to work.