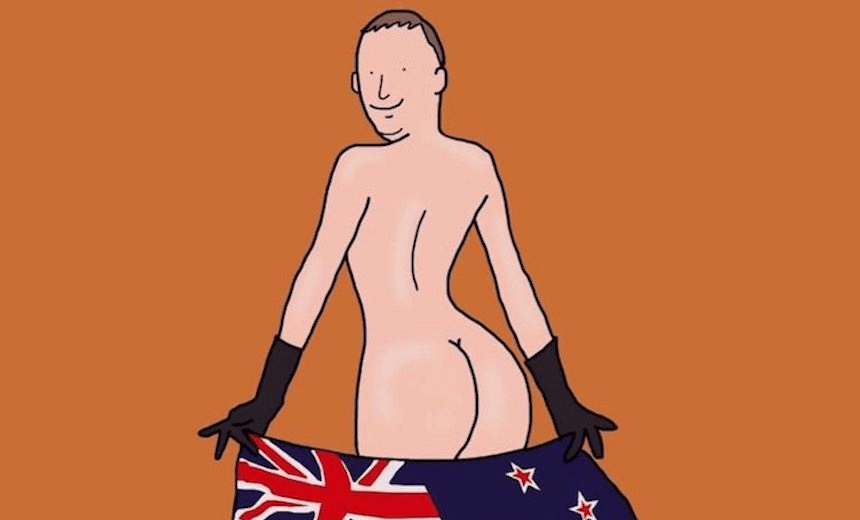 John Key as a nude muse: an artist farewells her favourite subject

John Key was a lot of things to different people. For some, a hero. For others, a villain. And for illustrator Lucy Zee, a nude model.

Unless you’ve got John Key muted on your feed from that time every white man online was savagely trying to out do one another with who could make the best ponytail hot take tweet, you might already know that the Prime Minister of New Zealand has given us the ultimate shock twist of 2016: Announcing to the country that he will be resigning.

As an avid Labour and Green supporter, half of me is excitedly, delightfully suspicious of the announcement and the other half – the perverted, high functioning insomniac, fraudulation illustrator half of me – is feeling very, very lost.

I’ve dedicated at least five or six hours of my life drawing John Key in states of nudity. Think Marge in that episode of the Simpsons when she was struggling creatively about how to paint Mr Burns – that’s me, the only time I will ever have anything in common with Marge Simpson: we love to draw naked old men.

Here are a few of my favourite pieces that I’ve drawn of the PM of NZ.

Break The Country of NZ

This was the first nude John Key picture I drew. An image mirroring Kim Kardashian’s iconic ‘Break The Internet’ photoshoot for Paper magazine. I saw John Key as a very narcissistic, money loving, attention seeking figure at the time (I still do lol) and seemed like he had a lot in common with Kim K. And also, like a moth to a flame, I am just really taken by a glossy butt.

This was one of the more tamer, and dare I say, romantic drawings I did of John Key. Inspired by a beautiful Lonely Lingerie photoshoot, I imagined that if JK was the same age as as me he would be really into locally made, fashion-forward statement pieces and have total body confidence to pull it off. He’d also be rich enough to afford a matching 2-piece set from this brand, not even on sale.

The piece has its origins in famous DJ Max Key’s Instagram post of John Key taking a selfie with his son. I was so taken by this image, how casual and typically KIWI it was that such a photo existed of our prime minister, that I painstakingly drew every curve of fat, every pale strand of body hair, every wrinkle, every penis vein. And it paid off because Max screengrabbed my tweet of the drawing and posted it to his Facebook. Worth the RSI, worth the neck cramp, worth every Meninist commenting that I was a sexist pervert for drawing this.

This is the latest (and maybe the last ever) I drew of John Key. I hate this picture the most. I hated hated hated drawing this, but I couldn’t stop myself from doing it. I physically felt sick, I had to cover half the drawing as I drew John Key in. I took like six breaks in the hour it took to do it but I kept going, I just couldn’t help myself. This was the first time I questioned why I kept drawing John Key. These pictures are time consuming to do, they’re mentally taxing. I’ve even cancelled appointments so I could finish drawing them. The worst part is that I didn’t even do these pictures for money. No one ever asked me to draw John Key nude. I didn’t even do them for the Twitter faves. I genuinely just kept drawing these pictures so I could sit back, look at my work and then laugh at myself.

And almost three years after the first picture, I am still laughing.

I don’t know how to say goodbye to doing these pictures, but I feel like after John Key’s resignation I am probably not going to draw another one. Culturally, to me, he won’t matter anymore. I don’t get the same joy drawing any other politician than I have drawing John. It kind of feels like a break up with someone that I didn’t even really like in the first place. I think I will just miss the familiarity and the sense of community there was because we all hated him so much.

Like the worst ending to a series (the Dan Humphries reveal in the final episode of Gossip Girl) this is my badly-curated, reputation-ruining, phoney so-called love letter to John Key. I just hope that one day, when I’m looking back at one of my old nude John Key drawings on the internet, that same day, somewhere else, John Key is looking at one too.