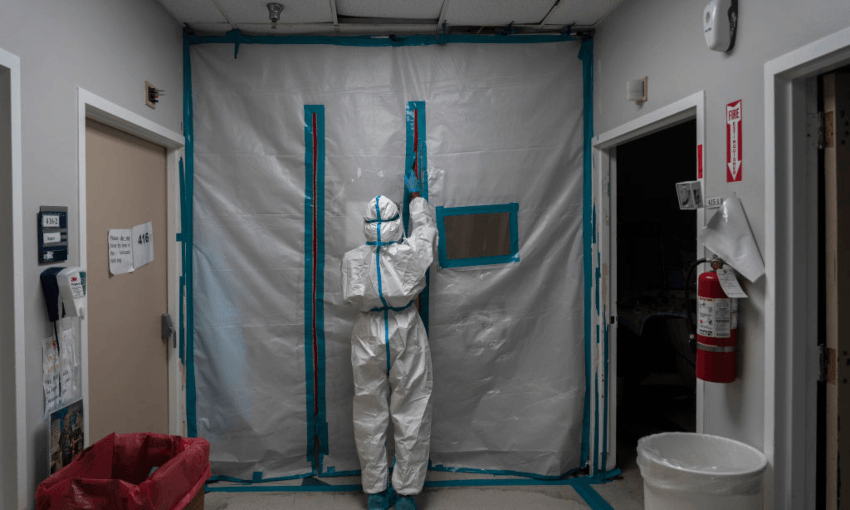 While New Zealand has been on holiday, Covid-19 has gotten much worse beyond our borders. Justin Giovannetti looks at the global situation and what we can expect in the year to come.

It’s a new year, but the world remains locked in a very familiar crisis. Despite encouraging vaccine developments before Christmas, Covid’s spread has accelerated in recent weeks plunging swathes of humanity into lockdown once again.

It was only a year ago, in the early days of January 2020, that the world first took notice of a mysterious pneumonia-like illness in central China. Amid missile strikes in the Middle East, the ongoing impeachment of US President Donald Trump and the deliberate obfuscation of Chinese authorities, Covid-19 percolated for weeks before erupting around the Earth.

Fast forward to December, and the year ended on a promising note in Aotearoa, with the country securing 15 million Covid-19 vaccine doses and Jacinda Ardern floating the prospect of travel bubbles early in 2021. While a quarantine-free sea encompassing the Cook Islands, Australia and Niue is still possible, it might take some luck.

The international situation in early 2021 has grown grim.

A fast-spreading variant of the virus is now present in over 30 countries. Experts have warned that the B.1.1.7 variant could soon become the world’s dominant form of Covid-19. Up to 60% more transmissible than the original form of the virus, the variant is one of the reasons for an explosion of cases in the UK.

One in 30 Londoners are currently infected with the coronavirus. The UK is now in a strict lockdown until March, with prime minister Boris Johnson warning that “the weeks ahead will be the hardest yet.”

Across the Atlantic, the final, insurrectional days of Donald Trump’s presidency are also witnessing record levels of new infections. The variant’s arrival in the US, where an overstretched health care system was already failing to contain the earlier form of the virus has raised alarms. Further north, parts of Canada have instituted unprecedented curfews to control the worsening situation.

Even Sweden has spiralled out of control. Some in New Zealand had seen the Scandinavian country as an attractive alternative approach to Covid-19 due to its decision to forgo lockdowns and trust citizens to act responsibly. That country’s king and prime minister both recently admitted the approach resulted in abject failure. Sweden ended 2020 with nearly 350,000 infections and 7,800 deaths. The country has only twice the population of New Zealand, which itself suffered 2,500 cases and 25 deaths last year.

Australia’s prime minister is now looking at the possibility of shutting down flights from the UK and South Africa as the more virulent variant grows overseas. Covid-19 cases have been detected in recent days in Queensland, Victoria and New South Wales. Because of the ongoing trickle of cases, masks were made mandatory for spectators at a cricket test match in Sydney between Australia and India. Some suburbs of Sydney are under local lockdown. This morning a three-day lockdown of greater Brisbane was imposed after a case of the UK strain was identified.

Keeping the virus out of New Zealand

In response to all of this, New Zealand is building taller walls to protect the country. The government also announced before Christmas that it now expects to keep the border closed to nearly all travellers until mid-2022.

More testing is now being conducted at the border, especially for people coming from higher-risk countries like the UK. Where New Zealand’s testing was once largely limited to swabs on day 3 and 12 of a person’s time in managed isolation, returnees now face a much more flexible and aggressive schedule. It’s become impossible to generalise about who gets tested when.

A media release from the Ministry of Health earlier this week indicated that six new cases were detected at the border in two days. That wasn’t an unusually high number. What was unusual were the days into the returnees’ stays on which positive tests were collected: days 0, 1, 3, 6, 12 and 15. The last test was held after the normal 14-day stay because the person was a close contact of someone who had tested positive.

Along with more testing, New Zealand has added “another slice of Swiss cheese” to the country’s defences, according to the Covid-19 response minister, Chris Hipkins. Starting a week today, on January 15, all travellers from the US and UK will need to show a negative test result from within 72 hours of boarding their flight.

Countries around the world now require a pre-flight negative test, making New Zealand’s request easier to enforce. A pre-travel test currently costs a few hundreds pounds in the UK. A rapid testing station at Los Angeles international airport, the only place a passenger can fly to New Zealand directly from the Americas, quotes US $175 for a fast turnaround nasal swab.

The pre-departure testing will eventually be extended to all returnees, except those coming directly from Australia and nearby islands, according to Hipkins.

The health ministry is concerned about the spreading new variant, which has now been detected in eight returning New Zealanders, but also “the continued exponential growth of Covid-19 around the world. The growth curve is not slowing, it’s still spreading rapidly. The new variant is one of the factors, but it’s not the only one,” Hipkins told reporters early in the new year.

As a result of the warning signs around the world, health officials have signalled alarm in New Zealand about plummeting use of the Covid-19 tracing app and deeply depressed testing levels.

Air New Zealand has responded to the worsening situation in the US by announcing plans to start routing its planes through Honolulu on their way to California. Passenger and cargo flights will change crews in relatively low-Covid Hawaii, allowing the airline to avoid long crew stays in the continental US. This will slow the passage of freight and passengers from the Americas to New Zealand.

Los Angeles suffered a devastating spike in Covid-19 cases after Thanksgiving, which only intensified with more gatherings held over the Christmas holiday.

The vaccines won’t save us yet

The focus will shift in 2021 to the global effort to vaccinate billions of people as quickly as possible. Millions have already been vaccinated, but health authorities want to deliver jabs faster than new infections. So far, they’ve fallen far short of their goals.

In the US, the Centres for Disease Control had hoped that 20 million would be vaccinated by the end of 2020. That target was set before the faster-infecting variant of the virus made headlines. The US only delivered 2.6 million jabs last year.

The delay, in part, has been blamed on a breakdown between a national government that has spent billions developing and purchasing the vaccine, but balked at providing cash-strapped states with any money to actually administer it.

President-elect Joe Biden has promised to vaccinate 100 million people in his first 100 days in office.

British authorities are also struggling with a complex vaccine rollout. In Canada, the prime minister has complained publicly that the country’s provinces have only administer half the doses that have been delivered.

Globally, the vaccine strategy adopted by many hard-hit countries has also changed in recent weeks due to new modelling. Where countries were once planning to reserve doses to ensure they could deliver the second jab necessary to make the vaccines highly effective, many are now using as many doses as they have right away. Modelling has shown that the jab first, worry about the second dose later approach, could save thousands of lives.

The UK has gone even further and is allowing health providers to mix different types of vaccines for the second dose, confident that a gamble with two mismatched jabs are better than nothing.

The first New Zealander is expected to get a vaccine in March.