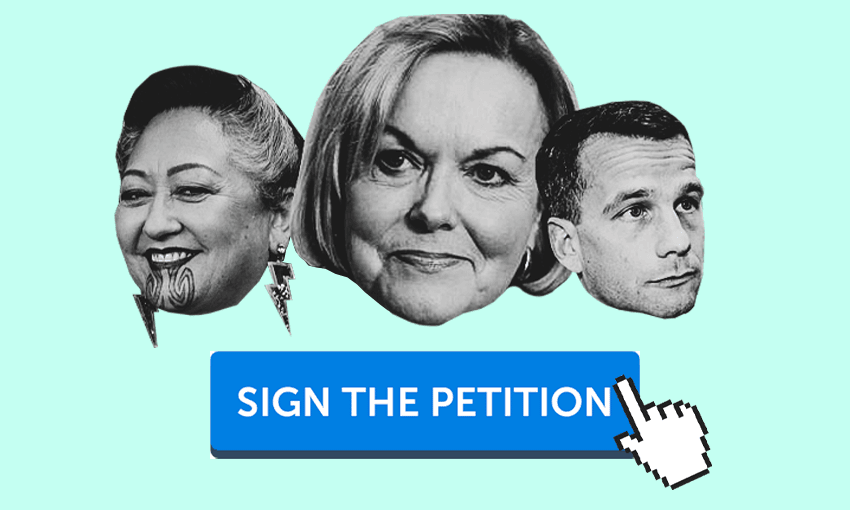 Sign me up: Why political parties are pushing petitions

Our politicians are enthusiastically promoting petitions as a way of drumming up support for an issue they’re focused on. But could there be a more cynical reason for this campaign tactic?

Act got thousands signing up to repeal new changes to housing investment laws. National got tens of thousands calling for a trans-Tasman bubble. The Greens got more than 150,000 in favour of a ban on conversion therapy.

All of a sudden, political parties are firing online petitions out to all and sundry, putting names on the record for particular issues. The use of e-petitions isn’t new in campaigning, but there has been a recent glut specifically put out by political parties.

Do the petitions actually accomplish anything tangible? And might there be a more cynical reason why parties have decided to start using them now?

Standard online petitions don’t necessarily have any legal standing. They can be presented to parliament, at which time they may end up being investigated by a select committee, provided the right process is followed. But they can’t be used to get something like a citizens-initiated referendum over the line, because there’s a much more formal and strict process that needs to be followed for that.

The politicians who push the petitions certainly back them as a useful way of sending a message. Green MP Dr Elizabeth Kerekere said that a petition to ban conversion therapy immediately was necessary, even though the government already had a bill in place to do just that – albeit with a slightly longer lead-in time.

At a rally at parliament, Kerekere said the petition to bring the law forward was launched for “the safety of our community” and “so that the healing and the recovery can better begin”.

And National leader Judith Collins suggested this week that credit for the trans-Tasman bubble – a priority project for the government for months – happened because so many people had signed the National Party petition to get it open.

In both cases, the petitions aimed to accomplish something that – all things being equal – was probably going to happen at some stage anyway. And while there’s no doubting the sincerity of signees, that gives the opportunity for MPs to claim a win that isn’t necessarily deserved.

Petitions are pushed by parties for two reasons, said political commentator and former parliamentary staffer Ben Thomas. “One is a stunt, in order to maybe get a bit of media coverage, or more likely social media engagement.”

Social media engagement is by definition self-fulfilling. Facebook posts that receive more likes, comments and shares end up being seen by wider audiences, thereby increasing the chances of gaining signatures if the post is for a petition. Some parties have even started spending money to boost their campaigns – though the sums are small compared to traditional advertising mediums.

Data compiled by Aro Digital showed the Greens spent about $400 on Facebook ads for their conversion therapy petition, while about $800 was spent on ads promoting a recent open letter on “beautiful, healthy oceans”, which also called for signatures. National does not appear to have spent money on promoting its trans-Tasman bubble petition on Facebook, while Act’s housing law repeal spend was less than $100.

But the Greens ended up garnering both more Facebook reach and signatures with their campaigns. Jonty Hodge, the director of performance and operations at Aro Digital, said it was clear “the Greens are able to better mobilise and engage with online audiences, and have shown real traction in the number of signatures they get for their petitions”.

Thomas described the second function of online petitions as an exercise in “trawling for information”.

“They’re collecting email addresses so that they can send out more political party collateral, which will often start as related to that issue that people feel so strongly about – and then maybe some fundraising requests, invitations to events, that sort of thing,” said Thomas.

“Is it cynical? In the sense that what the party is really trying to achieve, which is the acquisition of emails and contact information, that’s not really what they’re telling you. You could say that’s a little cynical.”

Hodge also warned that parties weren’t necessarily being honest with supporters about what their information would be used for. “Something to bear in mind is that such petitions can be used to build the party’s voter/volunteer databases, as you’ll notice that the opt-in to receive further communications is usually already preselected.

“Depending on the privacy policy of the party’s website, your information could be used for all sorts of things – that includes retargeted advertising, receiving emails, text messages and calls,” said Hodge.

What about using them as a measure of public support? That depends on the issue, and how the petition is framed. “Obviously it’s not a random sample – it’s self-selected – so statistically you wouldn’t say they’re worth much,” said Thomas.

“If an issue is binary and controversial – for instance marriage equality was an example of that when I was working at parliament – what you tend to find is that there’s large numbers of passionate supporters and opponents on both sides, and it tends to cancel each other out. A signature on a petition probably doesn’t mean a lot – most people are reasonably suspicious of things like duplicates and fake names.”

Even petitions that go through more official channels, like the 2012 citizens-initiated referendum  campaign against the partial sale of state-owned assets, can have relatively high numbers of fake signatures that need to be purged before the goal is achieved. Parliament’s clerk forced that campaign to hit the streets again after it was initially submitted, because close to 100,000 signatures turned out to be invalid.

But the concept of e-petitions generally remains a legitimate campaign tactic. Eliot Pryor from the non-profit group Action Station said his organisation is very selective about what campaigns they choose to host and participate in, unlike platforms like Change.org, which are much less so.

Pryor said the collection of email addresses – and subsequent messaging from petition organisers – can actually be very useful for signees, because it keeps them in touch with what progress has been made. If they support an issue enough to put their name to it, they may want to take further action in the future, and it can be frustrating for supporters to not know how to stay involved.

“For the campaign itself, it’s a really valuable thing to be able to communicate back to the people who signed the petition,” said Pryor.

“At the same time, there’s different organisations with different goals. My advice for anyone who isn’t sure is just to check out where it’s coming from – is it a political party you want to hear more from? Is it an organisation that you trust?”

*This piece was updated after being published with a correction on the parliamentary standing of petitions.