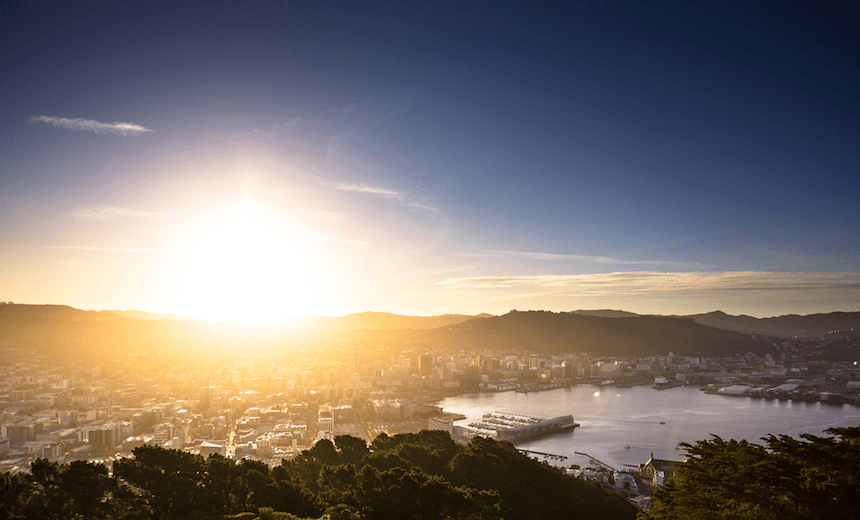 Time for a shake up: Why the civil service needs to move out of Wellington

As the plane banks and slides in to land, every single time I end up singing the bit that’s not entirely written by Don McGlashan: “And they’re playing the tape for the landing, ‘Sweet Bonny Boat, like a bird on a wing… Onward! the sailors cry.’”

And there she lies. Oriental Bay, possibly the Westpac Stadium. You can see Parliament if you’re quick, the Beehive’s Dalek back turned to the city, as if it’s keeping its one beady eye on the politicians.

Every time we land and we shuffle forward I greet the cockpit with a cheery “Thanks, driver!” (memo to Air New Zealand: the 737 pilots all laughed, the A320 pilots do not) and then we’re off into the city and who knows what weather. I usually check ahead and the locals on Twitter will always tell me “Oh you should have been here yesterday” and “You can’t beat Wellington on a good day” which is true, but on a bad day you can beat it with a stick.

Sadly for many commuters who love the Auckland-Wellington rabbit run, its days may numbered. Because Wellington is exactly the wrong place from which to run New Zealand’s government.

One of the major roles of governments is to function when all else fails. When the crops fail, when the water supply dries up, when the wharfies won’t let your produce get to market (ahem), when the peasants are revolting, there stands government ready to spend your money putting it right.

In New Zealand that list of potential disasters includes earthquakes, and sadly Wellington is built on the bits that shake the most.

I don’t want to get too technical but the two halves of New Zealand lie on two separate plates. As one crunches under the other like a yin and yang symbol gone mad, Wellington is the bit in the middle that gets screwed. Literally.

The main fault line (there are five that could cause “the most damage”) is The Wellington Fault which runs “right through the central city” to quote GNS, the Crown Research Industry unit that thinks about such things and whose head office is in Lower Hutt. Close enough to monitor, not close enough to be squashed by falling buildings (not its actual motto).

That’s unlike the New Zealand Defence Force, which already had to move out of its quake-damaged building on Aitken Street in central Wellington, and the Ministry of Civil Defence and Emergency Management (Lambton Quay), and the New Zealand Police national headquarters (Molesworth Street), the nation’s archive (Archives NZ, Mulgrave Street in central Wellington), the nation’s museum (Te Papa, Cable Street), and the list goes on.

Basically when the big quake hits Wellington, we’re all screwed. While any major quake would have devastating effects on the local population (to quote from GNS again, “When the Wellington Fault next ruptures it is expected to cause about 4-6 metres of dextral strike-slip [sideways movement to you and me] as well as variable but lesser amount of vertical displacement”), the loss of Wellington as a political structure cannot be overestimated.

And here I’m not talking about politicians but rather the civil service. Those of us outside Wellington often joke that Wellington is where we keep the politicians because they’re safely out of the way (OK, I lie – I often joke that) but the core of our civil service is also based in the capital for obvious reasons. You want your heads of departments and ministries to be close to their publicly-appointed masters at all times for proper and immediately accountability.

Of course, that need has been overtaken by two factors. The first is government divesting itself of as much property as it possibly can, and moving to a governance approach (rather than active management) to what is left – something I wholeheartedly support. The second is the advent of telecommunications and the ability to talk to people on the other side of the country, nay the world, cheaply and clearly at the drop of a hat. These days we can even send electronic letters to each other; some even claim that live “television pictures” can be beamed from your telephone, but I’m not entirely sure I believe them.

And no, this isn’t a “Wellington is dying, move everything to Auckland” story. Auckland, for those who don’t know, is built on a 360km wide volcanic field which isn’t classified as dormant let alone extinct and which could very well produce an exciting tectonic moment of its own with little or no warning.

Years ago I was contacted by a nice man from Treasury’s infrastructure unit who wanted to know about international connectivity from New Zealand to the world. I told him all about the Southern Cross Cable and why it was a high-risk issue for me. But there are two cables, he said. Yes, said I, and they land about 30km apart on an active volcanic field. So if – or rather when – something happens they’re likely to both get cut off.

He was not well pleased, even more so when I pointed out that it might take upwards of three months to get everything reconnected, assuming any volcano had actually stopped spewing forth hot rocks and ash by that time.

So Auckland’s out. Instead, we should move all our core infrastructure ministries and departments to other parts of the country. I’d like to see Archives NZ and Te Papa somewhere geologically sound (well, as sound as we get in New Zealand) – Hamilton might be the answer. Civil Defence, Police and the various Defence Force arms all seem like a good fit for Waiouru (although it’s a bit close to the volcanoes for my liking). There’s Dunedin, Gisborne, and Whanganui to consider as well, and let’s not forget the twins Palmerston North and New Plymouth.

The cost of the restructure is high but then so would the cost of any disaster that took out all these agencies. On the plus side, moving out to the regions would stimulate the local economies hugely, spread the risk to government more evenly around the nation, and mean that more people are closer to the civil servants who work for us, which will help those Net Promoter Scores no end.

It’s high time we had a conversation about this. We’ve had two major earthquakes in Canterbury in recent times and both were supposed to be a wake-up call to New Zealand. When you add in the Kaikōura earthquake you have to wonder if we haven’t all collectively hit the snooze button.

We can leave the politicians in Wellington if you like.