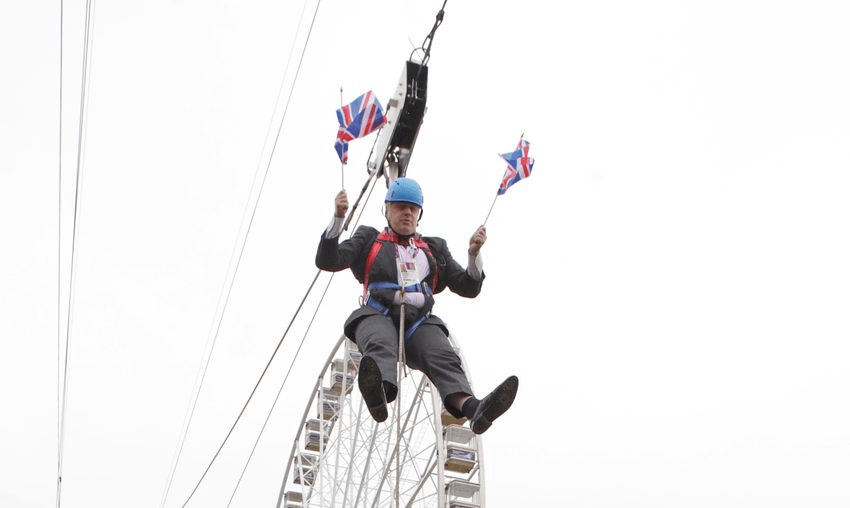 Our Q&A introduction to the topic of the moment. Today: Theresa May’s UK government is in crisis following high-profile resignations and disarray around plans to leave the European Union.

The British government has been as sober and stable as a vodka jelly since it voted two years and two weeks ago to leave the European Union. In the most recent hideous shudder, the bombastic classicist, celebrity cyclist and foreign secretary, Boris Johnson, has resigned from cabinet, joining David Davis, who has quit as Brexit secretary. A couple of other people with long job titles and forgettable names have also resigned.

Why did they resign?

The resignations follow a grand and tense gathering of cabinet at the prime minister’s country residence, Chequers, at which everyone present was required to surrender their mobile phones to avoid leaks.

Not really. Theresa May had sought to reach a compromise on the approach for negotiating EU departure, and emerged looking chuffed, saying they were firmly united behind a soft Brexit.

But they were not.

They were not. David Davis, who likes a bit of principled resignation, quit, telling May in a letter that he would not be a “reluctant conscript” to her Brexit plan.

Was it the ‘soft Brexit’ that irked Davis?

Yes, or certainly the shape of it as determined by the Chequers meeting. May announced a plan that would seek a “free trade area for goods”, essentially keeping the status quo for manufacturing and agriculture post-Brexit. UK courts would also accord “due regard” to the European Court of Justice.

The British love a bit of epistolary duelling, and hot on the heels of lofty letters between Davis and May, Johnson and May had their own, even loftier, and spikier, exchange.

What did Johnson say?

“[The] dream is dying, suffocated by needless self-doubt … It now seems that the opening bid of our negotiations involves accepting that we are not actually going to be able to make our own laws. Indeed we seem to have gone backwards since the last Chequers meeting in February, when I described my frustrations, as Mayor of London, in trying to protect cyclists from juggernauts …

“We are now in the ludicrous position of asserting that we must accept huge amounts of … EU law, without changing an iota, because it is essential for our economic health – and when we no longer have any ability to inﬂuence these laws as they are made. In that respect we are truly headed for the status of colony – and many will struggle to see the economic or political advantages of that particular arrangement … The government now has a song to sing. The trouble is that I have practised the words over the weekend and find that they stick in the throat. We must have collective responsibility. Since I cannot in all conscience champion these proposals, I have sadly concluded that I must go.”

(He’d earlier, reportedly, told colleagues to support the Chequers plan would be “polishing a turd”.)

“I am sorry – and a little surprised – to receive [your resignation] after the productive discussions we had at Chequers on Friday, and the comprehensive and detailed proposal which we agreed as a Cabinet … As we developed our policy on Brexit, I have allowed Cabinet colleagues considerable latitude to express their individual views. But the agreement we reached on Friday marks the point where that is no longer the case, and if you are not able to provide the support we need to secure this deal in the interests of the United Kingdom, it is right that you should step down.”

She seems quite fucked off.

Why did the Conservative government call a Brexit referendum in the first place?

Then prime minister David Cameron wanted to placate his perpetually grumbly Europhobic backbenchers by ending the debate once and for all with a plebiscite.

But he wanted to leave Europe?

No, he didn’t. He opposed Brexit.

But his replacement, Theresa May did?

No, she didn’t, either. She opposed Brexit.

But Boris Johnson did?

He said, and says, he did, but it’s widely thought that his enthusiastic backing for a leave vote – he was the leading pro-Brexit voice alongside comedy xenophobe and Trump buddy Nigel Farage – was designed on the assumption that Remain would win, and really all about positioning himself for a leadership bid. Then when the humiliated Cameron resigned, Johnson’s leadership bid was squarely rejected by his fellow MPs.

What will Britain do? Any out-of-the-box ideas?

Yes. The veteran Mail columnist Melanie Phillips had an excellent and completely reasonable suggestion: “I’ve said it before: draft Farage. Sack May, give Farage a peerage, make him party leader and PM – at least until UK really does properly leave the EU. Too fanciful? Desperate times need desperate measures; public faith in democratic process now in danger.”

Will May soon face a leadership challenge?

The opposition Labour Party must be laughing all the way to the polling booth.

Not particularly. Obviously the catastrophic Tory government is to their advantage, but they’ve been a bit shit on Brexit, too, to be honest.

With Britain melting in a heatwave, drunk on unexpected success in the World Cup, preparing to mark the visit of the US president with a giant inflatable Trump in nappies and a squillion sweary placards from the proud people of Scotland, and now this, is the place seriously about to blow its top?

Probably not. France will win the World Cup.