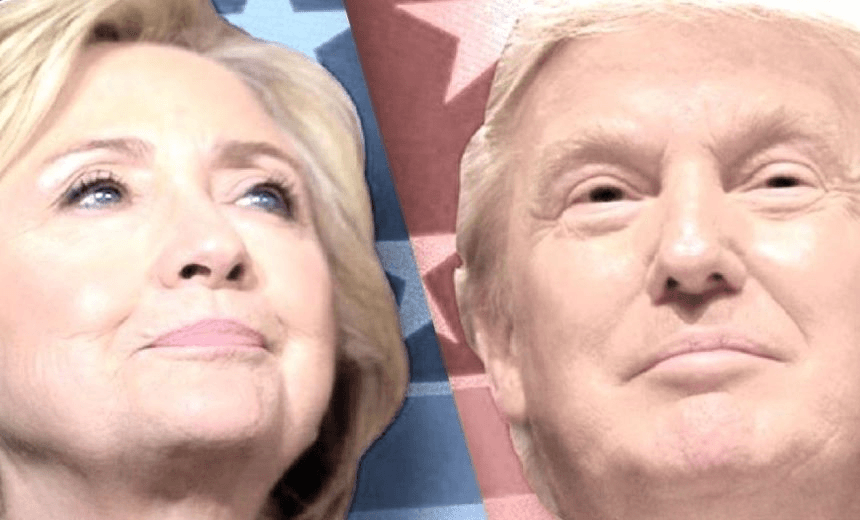 Back when there was hope

Hillary vs Donald, digested: the second US presidential debate in five minutes

Back when there was hope

Hillary Clinton and Donald Trump meet again for the second of three debates in the most bonkers and disturbing campaign in the history of the universe. Toby Manhire watches and boils it down into a sticky raspberry jam.

Read the five-minute version of the first debate here.

Co-moderator Martha Raddatz of ABC: These people on the stage here will ask some questions. No applause. No booing. No outbursts.

Donald Trump, the actual real-life, not even kidding Republican candidate for the presidency: Hello.

Patrice, an Ordinary American: Are you decent role models?

Clinton: Our country is great because we’re good and I’m good and let’s be good.

Clinton: He’s not fit for office. This is who he is. This.

Raddatz: An ordinary American on Facebook, Geoff from Ohio, says what you said made him mad.

Trump: Locker room talk. Bill Clinton was so much worse. Abuse. Worse. Worst ever, believe me. Also she once laughed about defending a rapist. She disgusts me.

Trump: Your campaign attacked Obama so you owe him an apology. All those emails. Acid washed. Sanders signed on with the devil, ie you. Sniff. And WikiLeaks. Look at WikiLeaks. By the way, I’m staying very composed, believe me. And I hate to say it, didn’t think I’d say it, but if I win I will get a special prosecutor to look into your situation. What I’m doing here is just casually threatening to get my political opponent put away if I win. And look at me walking around, easy.

Clinton: Look at my website. Let me tell you about my website and walk around a bit, too. Just as well he’s not in charge.

Trump: Because you’d be in jail.

Clinton: There were mistakes and I apologise. But come on.

Trump: Emails, Anderson. Are we going to talk about the emails?

Cooper: We were just talking about the emails.

Trump: Ganging up. Three on one. Not fair.

Ken, an Ordinary American: Obamacare is not affordable.

Clinton: I’ll fix it. Not repeal it.

Trump: Repeal it. I’m walking around the stage, staying awake, also composed, and I’m saying it’s bad, very bad, very expensive, unbelievable. Repeal it and replace it with a thing that is absolutely less expensive and not bad.

Cooper: Your husband said it was a disaster.

Clinton: He clarified. He meant a good disaster.

Clinton: Muhammad Ali was a Muslim. Donald is helping jihadists.

Raddatz: You said Muslim ban, your running mate last week said not so much.

Donald Trump, whose running mate Mike Pence is reportedly so appalled by Trump he’s considering quitting as would-be vice-president: It’s called extreme vetting. Sniff. So many Syrians. So many.

Clinton: Refugees. Bombed. Blood. Suffering. Russian aggression. I’m walking around and so is he.

Trump: I was against the war. She was for the war.

Ordinary American via that website: WikiLeaks shows Hillary talking about having a public and a private position. Is that allowed?

Clinton: I think I had been watching a Steven Spielberg movie. Abraham Lincoln. What a marvelous film-maker. But Russians and WikiLeaks, hacking and Russia, Russia and hacking. Right?

Trump: So ridiculous. She got caught in a lie. Friends at the banks. WikiLeaks. things came out. Now she’s blaming Abraham Lincoln.

Spencer, an ordinary American with scary eyes: Taxes, though.

Clinton: Actually I want to get rid of carried interest.

Trump: Then why didn’t you get rid of it?

Audience: Yes why not, rahhh?

Clinton: Let me read several pages from my CV about my achievements. Thirty years.

Trump: Yeah but she said a lot of things – can I?

Trump: She talks tough against Russia. They’ve built nukes, new nukes. We’re old, tired, exhausted. Not me, our nukes. She’s a mistake, a disaster. Libya, and by the way Iran. Snifffff.

Raddatz: What would you do about it? Syria.

Trump: Knock ’em out. Get Isis. Isis. Look at Mosul. We announced that. And all the bad men left Mosul. Why can’t we make it sneaky?

Raddatz: What is your strategy?

Trump: Spinning in their graves.

Clinton: I’d go after Baghdadi, and consider arming the Kurds.

Trump: She went a minute over and you don’t stop her and I go a second and it’s not fair, nor fair at all.

An ordinary American whose name is James: Can you be a leader for all people?

Trump: Oh yeah. She calls us deplorables. Her husband signed Nafta. She wants to sign TPP. She said she didn’t call the it the gold standard and she did. She lied. Lied. Lied. Liedyliedylied. Inner cities, believe me. African Americans. Hispanics. Latinos. All Americans. She’s hopeless. Lots of people come to my speeches. Sniff.

Clinton: A lot of people voted for me when I ran for my second term. A lot of people write to me. Here’s an example about someone called Felix who thinks Donald Trump might send him back to Ethiopia.

Trump: I’m walking around, you can’t see me. Where am I? Donald’s behind you.

Hillary turn around there’s something behind you girl TURN AROUND. #horrormovie #debate -H pic.twitter.com/nzzn6JfD49

Clinton: My argument is not with his supporters but with him.

Trump: We have a divided nation. Snifffff. She has a lot of hate in her heart, believe me.

Cooper: Tweeting at three in the morning.

Clinton: I’ve worked with presidents, one of them was my husband.

Clinton: I want a Supreme Court that will stick with a woman’s right to choose and marriage equality. The Senate should have let Obama appoint someone to fill the vacancy.

Trump: The judges I want are very beautifully reviewed by everybody. Respect the second amendment, which is under attack by people like Hillary Clinton. And by the way I’m paying millions for my campaign, why isn’t she putting some in, not mine but hers, and she made a lot of money in office.

Clinton: Scratch of my ear.

Clinton: Clean energy superpower. Did I mention my website?

Ordinary citizen Karl Becker: Can you name one positive thing that you respect in one another.

Clinton: That’s a fair question, a really good question and I’m going to keep talking about what a good question it is while I try to remember the answer to it. His children! I respect his children! Vote Hillary.

Trump: That’s a nice compliment. I like my children, too. Hillary’s a fighter, she doesn’t give up. Everything else, terrible.

Cooper: Thanks for watching, and the final word is from me: Goodnight.