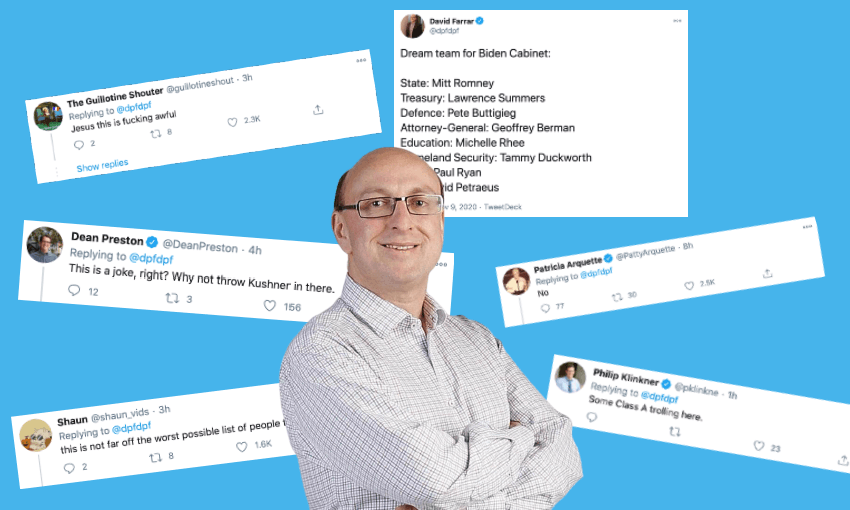 David Farrar (not Farrier) is a pollster for the National Party. Today, he’s being tweeted by Patricia Arquette. Stewart Sowman-Lund talks to New Zealand’s newest celebrity.

Updated with tweets by Ilhan Omar and Alexandria Ocasio-Cortez.

Right-wing blogger, commentator and the head of Curia Market Research, David Farrar, has been flung from the safety of New Zealand Twitter overnight, going viral thanks to a post speculating on who US president elect Joe Biden might choose to be in his cabinet come January 20.

The tweet, which as of writing has more than 2,700 “quote tweets” and nearly 8,000 replies, speculates that Biden may fill his cabinet with several “never Trumper” Republicans, including Mitt Romney – a former presidential nominee.

Farrar’s moment of online fame has seen his tweet spotted by everyone from American journalists and right-wing commentators through to a whole host of trolls and even Hollywood royalty in the form of Patricia Arquette (who simply responded “no” to Farrar’s suggested lineup).

It’s also been picked up by members of the actual US House of Representatives, with Ilhan Omar calling the list “insane” and Alexandria Ocasio-Cortez asking her followers for their own “dream” list. Newsweek.com have compiled a list of the best “meme” selections for Biden’s cabinet.

😳 Suggesting Democrats appoint Republicans to the most important cabinet positions, is the same as winning a championship and being asked to give it to the losing team.

Speaking to The Spinoff, Farrar laughed while discussing his new-found celebrity. Going viral over this tweet was “hilarious”, he said.

“Some of [the comments] have been great. I love the one that said ‘you forgot Thanos for secretary of defence’.”

Farrar has never understood why people would vote for Trump, but after reading some of the responses to his tweet he’s getting a bit more of an insight.

“When you look at the culture wars in the US and you have all these angry people piling on abuse, I can now understand why someone says ‘well, they’re one side and I’m on the other side’.”

Who’s in your dream cabinet? ⬇️

The tweet started to be picked up by overseas Twitter accounts almost straight away, says Farrar, even before it was getting retweeted. “What was weird was I still don’t know, because there were no retweets, how it got to them.”

The target audience was New Zealanders – people who were interested in US politics and wanted to dissect the results. Despite this, the early response seemed to be from Americans. “There were almost no replies from people in New Zealand, which was really the target,” Farrar says.

“When I went to bed last night it was at nearly a thousand [comments], now if you include the retweets it’s hit about 10,000. It’ll be really interesting to see what the life cycle is.”

Most of the response has so far been outrage, abuse, or humour. In among the onslaught of comments and retweets, it’s hard to find any other people who support Farrar’s picks. Regardless, he stands by them – even if it “wasn’t a serious analysis”.

Why Mitt Romney for secretary of state? “Trump interviewed him and didn’t pick him, [and] he’s the one guy who voted honourably to convict Trump. But also, Russia would hate it. If you remember the Romney versus Obama debates, Romney said Russia is our number one geopolitical foe,” says Farrar.

Geoffrey Berman, Farrar’s pick for attorney general, was pushed out by Trump following an investigation into his attorney Rudy Giuliani – the man now most famous for a compromising scene in Borat 2 and for hosting a press conference in a parking lot.

“If you want someone who is actually going to hold Trump accountable for his crimes, who better than the guy who was so honourable that he actually refused to resign or drop investigations as a Republican-appointed US attorney, appointed by Trump,” Farrar argues.

Paul Ryan is another one who has “really set them off” on Twitter. Farrar’s put the former speaker of the US House of Representatives into the trade slot. “Trump was anti-trade, Biden and Obama negotiated the TPP. Ryan is about the only Republican I can think of who has intensive principles in terms of the free market,” says Farrar.

Despite becoming an overnight Twitter sensation, Farrar hasn’t yet been asked to become a commentator for Fox News. “This is my dream team,” Farrar explains. “This is not me saying this is who Biden’s going to pick or this is the inside scoop. It was just saying, ‘hey, these are the people who I think would do a good job’.”

More than anything, it was meant to be anti-Trump, Farrar says. Even with the vast amounts of personal abuse now being directed at him, Farrar has been enjoying the humour that’s arisen from his tweet.

“Maybe the US Embassy is now filing a report to the State Department?”