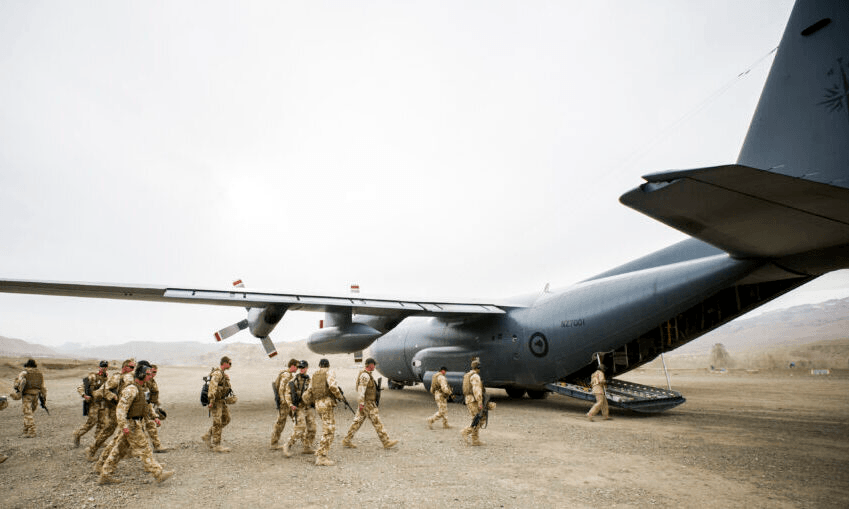 NZ troops board a C-130 Hercules in Bamiyan, prior to the NZDF’s withdrawal from Afghanistan (Archive photo: NZDF)

For and against: The government’s $1.5 billion military aircraft buy-up

NZ troops board a C-130 Hercules in Bamiyan, prior to the NZDF’s withdrawal from Afghanistan (Archive photo: NZDF)

A peace group has raised furious concerns about the government spending $1.5 billion to buy five new Hercules planes. Do they have a point? Alex Braae argues with himself about it.

With defence minister Ron Mark strapped in and leaning out the back of a military plane, the announcement was made that the fleet of Hercules military transport aircraft would be replaced.

Peace groups quickly raised the alarm, particularly because of the political implications of the purchase, not to mention the price tag. So was it a good idea?

For: The five new Hercules planes will replace a fleet that is embarrassingly decrepit.

The planes that are being replaced were built in the 1960s, and as such simply weren’t usable in any meaningful capacity. At one stage last year, mechanical faults caused the entire fleet to be grounded. As such, new planes simply had to be bought.

Against: Come on, we don’t need to spend more a billion and a half on war planes.

New Zealand should not be going to war any time soon, because we don’t have any enemies worth fighting. Spending more than a billion dollars on this sort of equipment is pure vanity from politicians who want to look bigger on the world stage, or do cool photo-ops hanging out the back of them.

For: The job of these planes will be primarily humanitarian.

Just because you don’t intend on going to war, doesn’t mean you shouldn’t make preparations in case it happens. Besides, in recent years the NZ Defence Force has pivoted to seeing climate change threats as being among their most significant, and as a regional leader New Zealand has significant responsibilities here. Much of the work that gets done by these transport planes is about delivering aid to parts of the Pacific that are recovering from cyclones and other disasters. Rather than taking lives, these planes will probably end up saving lives.

Against: If the purpose is humanitarian, why buy war planes at all?

As peace group World Beyond War argues, the government could have instead bought up Air New Zealand planes that have been decommissioned, thus getting a ready-made and well maintained fleet of planes while also supporting an important local company.

For: Commercial planes can’t necessarily do what a Hercules can do, limiting their effectiveness

The good thing about military equipment is that it is built for tough and inhospitable conditions, like landing on a dirt runway covered in debris after a massive storm. If you tried to do humanitarian and civilian work with Dreamliners and the like, you’d spent most of your time doing rescue missions for crashed planes.

Against: By buying these planes from a company like Lockheed Martin, we’re yoking New Zealand into the US war machine.

As World Beyond War put it, “we understand that the Hercules war planes are technically geared to be a full fighting force closely aligned with the US military under the command of Donald Trump, which quite frankly is terrifying.” What say the US goes to war, and we end up being dragged into it? Do we really want to have New Zealand personnel fighting on behalf of Donald Trump, or any future US president for that matter? Even if they’re just doing logistical support, by having these capabilities, we’re leaving ourselves open to that possibility.

For: Every country needs allies, and sometimes we need to support them.

When it comes to international relations, it’s a good idea to stick with the devils you know. Over the last few decades, New Zealand has managed some degree of international independence from the US, while also staying a part of their wider network of allies. Examples of this include sending a small number of personnel to Iraq to be part of an international coalition, but not taking part in the initial invasion. And by buying these particular planes, we’ll end up with a less expensive package than what otherwise might have happened – as defence minister Ron Mark put it, “this has reduced costs and allows collaboration with other nations on developments and system upgrades that will be necessary over the life of the aircraft.”

The final word against: It’s missing the point to say that it’s good to get a cheaper deal.

It’s more than a billion dollars! That’s an increase in weekly payments to every beneficiary, or the DHB deficit, or a massive chunk of the City Rail Link, or any number of other potential uses for the money. All government spending is about priorities, and this sets the wrong ones.

And when that happens, it helps to have the equipment to do something about it.