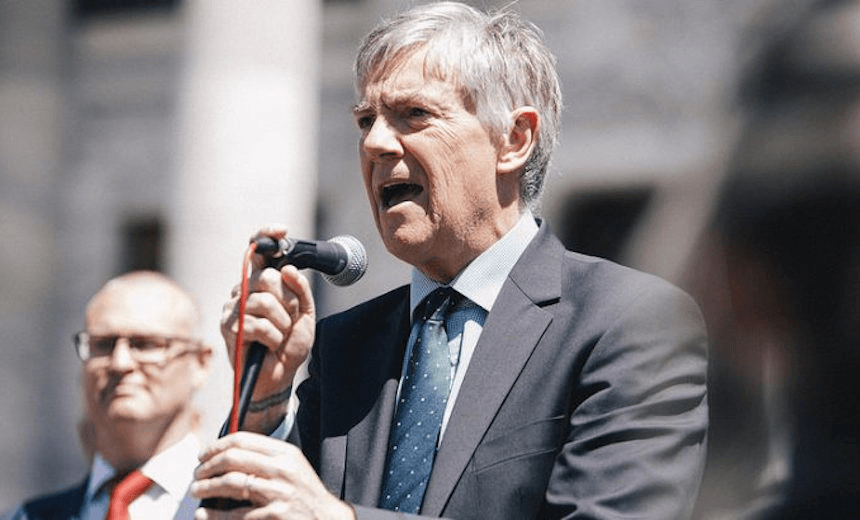 Gaffes come in a range of sizes and colours. One garden variety is the Kinsley Gaffe, named after the veteran American journalist who first identified the species, Slate founder Michael Kinsley. He describes it as the kind of gaffe “when a politician tells the truth – some obvious truth he isn’t supposed to say”.

The obvious truth just spoken in New Zealand politics is that the Green Party could, if denied any place in a Labour-NZ First government after September’s election, throw its toys and trigger another election. The politician who spoke it was Barry Coates, the newbie Green MP and former NZ Oxfam boss, who entered parliament late last year after the resignation of Kevin Hague.

The proverbial “nuclear option” is always there for parties who hold the balance of power – as would the Greens should Andrew Little and Winston Peters cobble together a coalition marooning them, in an echo of 2005, on the cross benches. It is implicit in any negotiations that take place: you need us, and, in extremis, we could bring down your government, forcing the country back to the polls. In reality, it’s a button that most parties are highly unlikely to push, especially close after an election: the risk of a voter backlash is acute.

What you certainly don’t want to be doing, in the current febrile atmosphere around a change-the-government three-way especially, is pontificating about it all aloud. Not if you’re a Green MP. Whether or not it was a good idea for Green co-leader Metiria Turei to launch a weekend offensive against Winston Peters and his “racist approach” is debatable – it certainly returned the Greens to the front foot, and would have chimed with their base and Labour voters disillusioned by their stance on immigration – but it was clearly calibrated. Not least because, whatever Peters’ rumblings of “consequences”, it suits him fine to be able to righteously proclaim his non-racism, and by implication the non-racism – how very dare you! – of those who love him.

So the Greens’ salvo was calculated, but hardly meant as a clarion for an all-out pile-on. It was not intended as an encouragement for their lowest ranking MP to bound into the public square, “threatening a new election if Labour goes with NZ First”.

In truth, Coates didn’t quite do as described in that Newshub headline. He wrote a post on blogger Bomber Bradbury’s leftwing blog The Daily Blog, saying, “if we were not part of the coalition, we would not accept a Labour-New Zealand First government and certainly not a National-New Zealand First government. Neither will be acceptable to the Greens.” That in itself was going beyond what his leaders have said. Their line has been more nuanced – if people don’t want to see that play out, then vote Green, they’ve said.

And next, asked by Newshub if “this meant forcing the country back to the polls for another election”, Coates replied, “It could do.” And before he knew it he was threatening to take New Zealand to the polls for a second time by Christmas.

The Greens have been in damage limitation mode this morning, with co-leader James Shaw repudiating the remarks and publicly reproaching his MP. He has been forced to rule out forcing another election. Top of his mind, that dreaded row boat. The 2014 TV ad, since made famous by the “pretty legal” Eminemesque soundtrack and ensuing lawsuit, featured what National campaign manager Steven Joyce called “the Laboureens’ boat”, with one of the figures coloured purple in post-production to represent the added Internet-Mana oar, alongside another vessel, filled with a sleek bunch of blue figures rowing in time. It was “a symbol that showed how New Zealand was a team that was working together and really starting to get somewhere”, said Joyce, up against a rabble “arguing with each other”. They kept playing and playing the thing because the “opposition campaign steadily appeared more and more like that boat”.

In recent days on RNZ Morning Report, Andrew Little and James Shaw have separately used the phrase “strong and stable” to describe the kind of alternative government on offer. That they’d reach for the three words that made Theresa May look so foolish in the recent British election is striking enough in itself, but it underscores how keen, desperate even, they are to persuade us that they are sea-worthy.

Coates’ intervention, from that point of view, is a serious headache for the Greens and their would-be partners. Steven Joyce will meanwhile be licking his lips, drafting already lines about the piratical Barry and the Laboureen ship-sinkers.

For more politics analysis from Toby Manhire and The Spinoff, listen to our ‘Gone by Lunchtime’ podcast