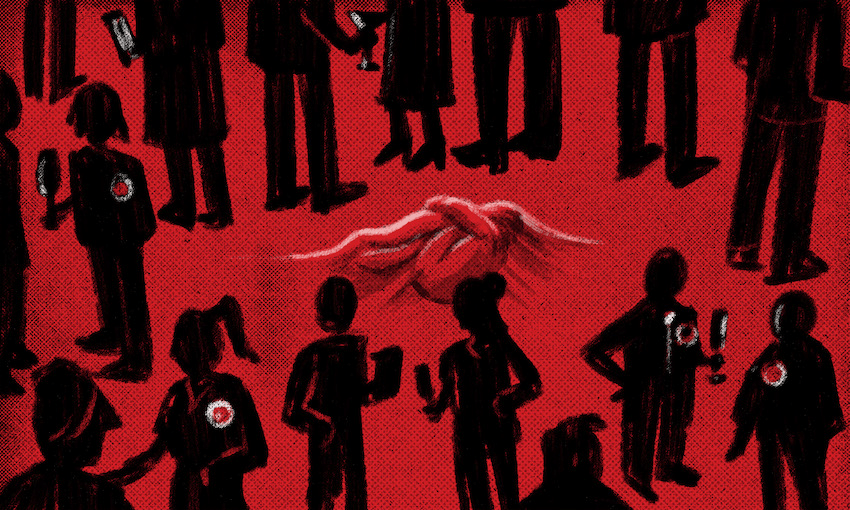 On the Labour Party crisis and Jacinda Ardern

The Spinoff editor writes on the story that has engulfed NZ politics this week.

One of the very few positive things to come out of a hideous week in New Zealand politics has been the sieving-out of the blinkered, partisan zealots. On one side, those who are ready to conjure up the wildest of potions to excuse the inexcusable because it’s their team. On the other, the troglodytes who’ve made sport of diminishing everything around the MeToo movement, but suddenly care about allegations of sexual assault because it suits their ideological stripes.

There has been some surprise, and a good deal of performed astonishment, about the way that the story around Labour’s inquiry into a staffer exploded following the story published by The Spinoff on Monday morning. There had been strong reporting in the days and weeks before that included reference to “sexual assault”. But there had been no detailed, first-person account of what is alleged to have happened.

The sorry truth is that many people – honestly, including me – have lazily begun to view MeToo as some horrible amorphous cloud. “Sexual misconduct” has become a shorthand, a catch-all. I don’t doubt there’s a continuum from lecherous quotidian behaviour to serious criminal abuse, but in the blur of headlines and lawyers’ linguistic fudges, it’s easy to forget that in every example what happened really happened to someone. It’s easy to forget, too, just how stacked the deck is against victims of sexual attacks.

Which is why, I think, my colleague Alex Casey’s reporting moved the earth on Monday. The story, courageously detailed to Alex by Sarah, as we’ve called her, involved many interviews and many hours. It’s an indictment straight off the bat that the time Alex gave to hear Sarah’s account is so very much greater than that afforded her by the original Labour Party inquiry.

And the story described an experience. (One that the unnamed man firmly denies ever happened, let’s put that on the record.) A hideous, traumatic, terrible and real experience. Our reporting has, and we intend that it will continue to be, as far as possible, victim-centred.

Of course I don’t know precisely who knew what or how much or when, but I have read a heap of correspondence and documentation that has been leaked to The Spinoff over the last month. I have no doubt in my mind that Sarah communicated to the Labour Party what happened to her. I think she’s been failed appallingly and indefensibly by the party she found a home in, that she believed spoke for and to her.

That doesn’t mean those around the prime minister were ignorant of the talk that had for some time been swirling around the staffer, who took the decision to resign on Thursday. It doesn’t mean senior people in the party had not been told about his allegedly odious behaviour. They may say they couldn’t do anything about hearsay and rumour; if so that’s clearly not enough.

And while I’m as certain as I could be that the prime minister didn’t know Sarah’s story, I don’t for a second think Ardern is blameless. I’ve been calling her the prime minister, but she’s also the leader of the Labour Party, and that’s a party where a poison has clearly seeped in – within Young Labour especially, unequivocally and horribly. We knew already about the Summer Camp scandal; The Spinoff has been contacted over the last few days with other stories that would chill you to the bone.

That’s on Jacinda Ardern, as the leader of the party, to sort out.

And so is the process of the inquiry. Originally set up to investigate bullying, we’re told, it turned into a debacle. Just listen to the RNZ Checkpoint interview, in which one of the three-person Labour Party investigation panel defends the process, and ask yourself: would you want a friend – brave, shaken, vulnerable, abused – to face that? You’d expect greater rigour, scrutiny and humanity from a suburban Playcentre investigation into a faulty see-saw.

That’s all on Ardern to fix.

In the meantime, if you want to share your story, we promise to do our best.