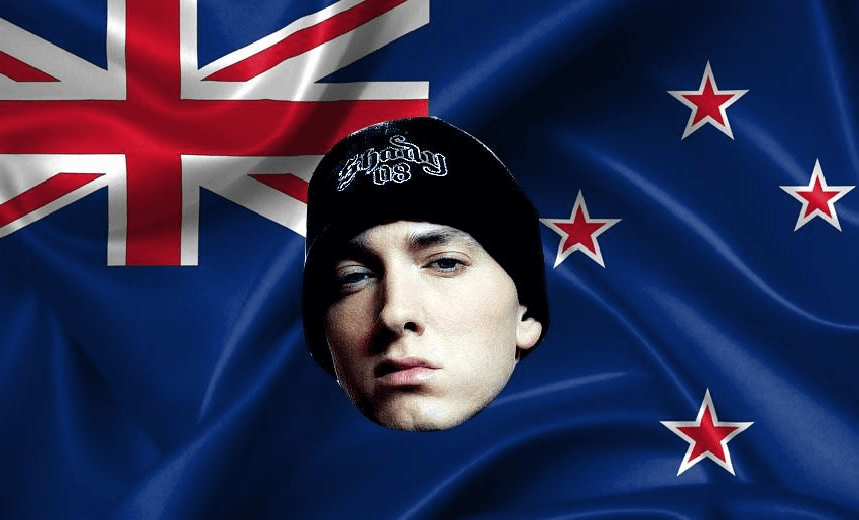 While we await the verdict in the Eight Mile Style action, revisit the glories from some of the greatest days the New Zealand justice system has ever seen.

Somewhere in Wellington, Justice Helen Cull is deep in thought, idly tapping a foot, perhaps, composing early passages for her judgment in anapestic tetrameter, maybe, as she decides whether the National Party breached Eight Mile Style’s copyright when it used the track “Eminem Esque” in a 2014 campaign advertisement.

While we await that judgment, like a mosh pit demanding an encore (except in this case the mosh pit might have to wait two or three months, so that’s not a very good analogy), let us pay tribute to one of the greatest court hearings the Wellington High Court has ever seen, ever heard, ever swayed to in hypnotic submission to the boom, boom, boom, boom.

Scored indelibly into the popular consciousness early in the hearing was the scene of the courtroom listening deliriously to Eminem’s “Lose Yourself”.

Jeff Bass, producer and Eminem composer of Detroit, was there, live, and “with his trademark diamond ear studs played the opening guitar riff he composed for the song”. (To be clear, he did not play the guitar with his ear studs).

Anyone wandering into Courtroom No 9 might easily have mistaken it for a discotheque, such was the outpouring of hit parade favourites. These included:

Then there was a kind of barrister rap battle. National’s lawyer viciously dissed Eminem by suggesting his song had “low-level originality”, while Eight Mile Style’s counterpart threw shade back the other way, freestyling, “The submission really defies common sense and the evidence.”

There were long metaphysical thoughts, such as that from Dr Kirsten Zemke, a musicologist called by the National Party, who said: “There is no musical meaning for the term ‘essence’… If there was something that could be called essence, it would be instead referring to the flow, lyrics, life, history, imagery, videos, engagements with the hip hop community, and the fierceness, anger, vulnerability or timbre of Eminem.”

And then there was the judge, Helen Cull, the Grandmaster Flash of Courtroom No 9. She is probably going to win all the nominations in that quote of the year roundup that Massey University or whoever run before Christmas.

“I’m not shy of loud music,” said Justice Cull. “Don’t hesitate to turn it up.”

And: “That doesn’t sound like the ‘Twist and Shout’ I know.”

In response to the suggestion that the name “Eminem Esque” wasn’t a factor: “It’s a little clue, though, isn’t it?”

And this incredible moment, in which 8 Mile went to Bonnie Doon: “Isn’t that what they wanted? They wanted the beat, the – dare I say it – the vibe.”

Will Justice Cull deliver her verdict in rhyme? You never know. And think about it:

In the meantime, all we can do to fill the void is revisit the last time the National Party tangled with rap, in the form of former National Party president Michelle Boag performing a reinterpretation of Coolio’s “Gangsta’s Paradise”.