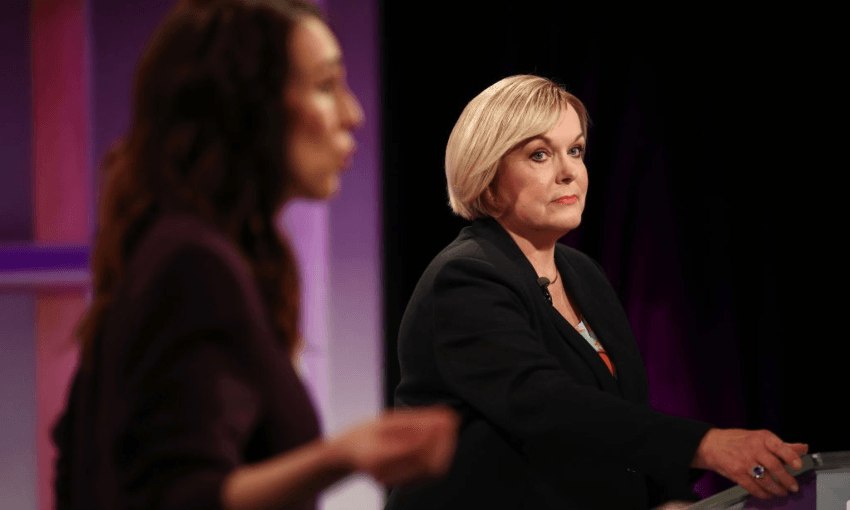 The empty political calories of the campaign’s final days

If this year’s election campaign trail could be likened to a breezy summer getaway with your best friends (and in my judgment as a political expert, I believe it can be) then this week we reached the stage where everybody’s had a nice group photo on the pier and then someone suggests: “now let’s take a fun one!”

How else to explain a roughly 48 hour period – three days before voting ends and during which over 200,000 New Zealanders voted – a discussion around who’s to blame for fat people?

Somehow National leader Judith Collins conspired to turn an innocuous question about support for a sugar tax into a two-day, defence of her position that obesity is a personal matter, not an epidemic (“it’s not catching!”), with Labour leader Jacinda Ardern chiming in that it’s an environmental public health issue. The Greens have not yet weighed in to say that “obesity” is only a socially constructed concept, but there are still two days of the campaign to go, after all.

Currently and formerly overweight politicians have been wheeled out to talk about the sense of moral culpability they feel or otherwise about their BMIs.

What’s striking is that neither party has any policy on obesity beyond, say, encouraging physical activity in schools. There is no sugar tax on the table, no removal of GST on fresh fruit and vegetables, no public subsidy for gym memberships or free Fitbits in schools. These may or (more likely) may not be sensible policies, but they would at least connect the last few days’ debate on diet, exercise and weight to the role of the state and the fact that there’s an election happening.

Instead, all that’s on offer at the buffet is the harsh admonition of Collins or the beatific absolution of Ardern, untethered from any consequences or promises of action in the real world. The discourse is stuffed with empty political calories.

Instead, for Ardern it was an opportunity to reiterate Labour’s favourite talking point that National was no longer “the party of John Key and Bill English”.

As a huge fan of English, the man she beat to become prime minister, Ardern may recall his comments in April that if stockmarkets rebounded quickly from the initial shock of Covid, and the pain of lockdowns was not borne equally, radical measures such as capital gains taxes may be back on the table.

But Ardern doesn’t lead the Labour Party of Bill English (or at least the Labour Party of his imagination), either. She’s spent the rest of the week hosing down National’s claim that a Labour-Greens government will implement a wealth tax on asset holdings over $2 million. She’s ruled it out, and the Greens have refused to make it a bottom line for negotiations, with various tough-sounding statements from MPs being rolled back over the past week or two.

In contrast to the bizarre emergence of obesity discourse, this is a promising and time-honoured National party tradition: scaremongering over the Greens. It could be asked why it took Collins and others so long to turn to it this year, but the reality is that Labour looked on track to govern alone in most polls until last week. Instead, it’s mainly tried to attack on debt, taxes, the border, and avocado orchards.

Nothing the National Party has thrown against the wall has stuck. But, ironically, neither has anything that Labour’s tried. Remember “double duty”, the slogan Ardern valiantly attempted to make happen in the first leader’s debate, to describe smart policies that achieved two goals (like clean energy projects that could reduce emissions and create jobs)? Me neither.

The election has remained, stubbornly, a referendum on Ardern’s performance during the pandemic. And a yes/no question doesn’t leave much room for nuance.

Perhaps this is to be expected. After all, no-one campaigned in 2017 on how they’d respond to a terrorist attack, a volcanic explosion and a global pandemic. It’s been popular to talk about “plans” in this election, but we all had plans of our own in January 2020, and look how that turned out.

Neither Collins nor Ardern could be drawn on the hypothetical but not unrealistic question in the second leaders’ debate of what they would do about New Zealand’s borders in the event an effective vaccine did not become available. It’s a non-trivial question. While the best strategy right now remains to keep the virus out with strict border controls, becoming a lost Atlantean civilization in the Pacific is not a long term option in the worst-case  scenario where a vaccine never appears.

Whenever a vaccine arrives, the next government will need to find a way to get more people through the border safely – to pick fruit, engineer shovel ready projects and bring cash into the economy. Labour has ruled out delegating this task to private sector management in order to scale up capacity, presumably on the basis that the Ministry of Health (which simply failed to implement cabinet orders to test people on compassionate leave and staff in quarantine facilities) has done such a bang-up job.

Labour, on track for a comfortable mandate, will not have the option of being a “do-nothing government”, no matter what the campaign itself has suggested. Because, as gruelling as the campaign has been for the politicians and the public, the September-October spring break is over on Saturday, and it’s time to get back to work.