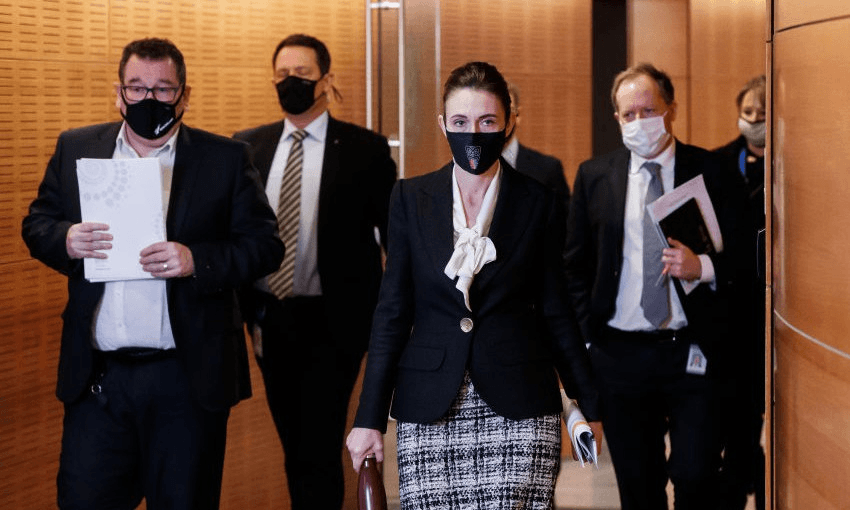 The government is rejecting suggestions it has lost control of the Covid response. Watching from Auckland, it doesn’t always feel that way, writes Stewart Sowman-Lund.

At the end of yesterday’s 1pm press conference, the deputy prime minister Grant Robertson faced a simple question from Newshub’s Tova O’Brien. “Has the government lost control of the Covid response?”

“Absolutely not,” he replied, citing our low hospitalisation rate and low mortality rate. “We are at a very difficult point in Covid as we transition to a framework where vaccination provides us all with that personal armour and we can move forward from there,” he admitted. “During this period we need people in Auckland to obey the alert level three restrictions and that is what will make sure we keep the outbreak under control.”

When I heard that I thought: really? That’s not to deny the factual claim Robertson made about our hospitalisation and death rates. Both of those are a credit to the government’s Covid response started in 2020. But those are not the only markers of “control” in a Covid-19 outbreak. And I’m worried that, soon, government officials won’t be standing proudly at the podium speaking of our hospitalisation rates.

Let’s break it down. We are currently entering the second wave of the outbreak, while we enter our third month under lockdown restrictions. New case numbers yesterday were almost the same as at the initial peak of the outbreak in late August. We spent more than five weeks at level four, a fortnight or so regular level three, and now we sit in 2.75 limbo. All the while, case numbers are rising, the number of people infectious in the community grows daily, mystery cases multiply, border breaches are commonplace and latest predictions suggest case numbers could double within a fortnight. The number of active cases right now has doubled in just nine days. The rate at which people are showing up for their first dose of the vaccine has slowed to a trickle. It was admitted yesterday that the contact tracing system only has capacity for around 170 cases a day.

None of that, I would argue, is the definition of control.

I put the question to Nick Wilson, public health expert from Otago University. “It would be better if the government was clearer about its strategy in Auckland, and the rest of the country,” he said. “A clearer goal around suppression within Auckland would help focus attention on preparing the healthcare system for more cases and hospitalisations. A clearer goal around elimination outside of Auckland would focus attention on strengthening the border around Auckland, and the Waikato, and to protect the South Island.”

As part of a suppression approach, it can be reasonably argued that the outbreak remains within control, said Wilson. But: “Given the rising number of cases, the incomplete vaccination coverage, and inadequate rule following under alert level three – then this ‘control’ may soon be lost and healthcare services are at risk of being overwhelmed.”

And he’s not alone in thinking that. Covid modeller Michael Plank’s predicted 150 cases a day by the start of November, a figure that would near overwhelm our ability to contact trace. Top epidemiologist Michael Baker called the move to level three “premature” and said he was not consulted on the shift. A coalition of Māori health providers described the elimination strategy as a “protective korowai” that had now been dropped. Boyd Broughton of Ngāti Whatua provider Te Hā Oranga said he was left with the impression that Māori were an “accepted collateral damage” from the government. The co-leader of the National Māori Pandemic Group Papaarangi Reid called for a snap level four lockdown – a move backed by Shaun Hendy, whose modelling has helped inform the government response.

Of course, vaccination numbers haven’t completely stalled. With a Super Saturday boost, there’s reason to be confident that Auckland will hit 90% for first doses before long. What we don’t know is what that actually means for us. Does hitting 90% mean we can move to the next step in our level three exit plan? What happens if case numbers are still rising at the current rate even if vaccinations hit the mark? When will we be able to get down to step three? What about level two?

As Newsroom’s Marc Daalder surmised, vaccination is now the exit strategy for Auckland. A move to some sort of “circuit breaker” alert level four has been ruled out, despite consensus among many health experts and Māori leaders that it would be the right move. But at what point does vaccination become enough, without a circuit breaker, to actually break the circuit? If the outbreak is “under control”, how much longer do we have to sit tight in lockdown, picnic-ing but unable to hug friends or family? It’s all well and good to blame Aucklanders for not obeying restrictions, but when those restrictions are so paper thin that the question of using a toilet causes ructions – well, maybe it’s not well and good.

Wilson says that under suppression, returning to level four may not actually be helpful. But once the vaccination rollout concludes, elimination may be seen as the way forward again. “Then there might be a role for targeted lockdowns in affected suburbs – ideally with a lot of extra social and economic support.”

What might help those Aucklanders who feel as though control has been lost is clarity. The government has resisted setting precise targets, but the time has come to tell us just what we can expect when the vaccination rate hits 90%. Attaching some numbers to the plan will add a precision and coherence to the response – and restore a sense that those at the wheel have it under control.