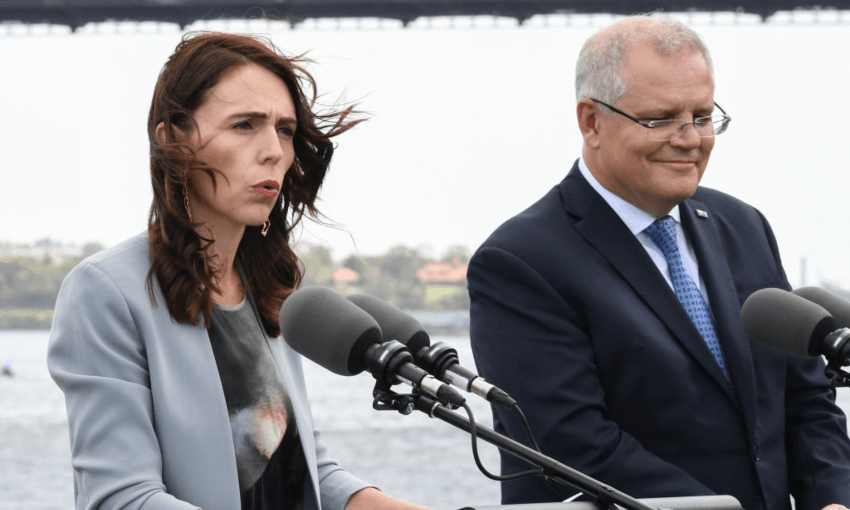 NZ is fuming at Australia for washing its hands of a dual citizen. What does it mean for her children?

In spite of the seeming intractability of the trans-Tasman row over the woman linked to Isis that was detained in Turkey, the situation facing her children needs resolving, writes Claire Breen.

By unilaterally revoking the citizenship of the 26-year-old woman detained in Turkey this week, Australia has potentially left her two children in diplomatic limbo.

Known only as “SA” (but named by the ABC as Suhayra Aden from Melbourne), she was the subject of an Interpol blue notice, according to the Turkish Ministry of National Defence, which alleges she was a terrorist with Islamic State. New Zealand Prime Minister Jacdina Ardern responded sternly to Australia’s actions, saying it amounted to their dumping the problem on New Zealand’s doorstep.

The mother had dual New Zealand and Australian citizenship, but left New Zealand for Australia at the age of six, and travelled to Syria from Australia. It would now appear Australia is also seeking to shut the door on the two children. To paraphrase the old saying, the sins of the mother are being visited upon the children.

The ‘privileges’ of citizenship

The stripping of citizenship as a counter-terrorism measure seeks to address the threat posed by individuals suspected of, or engaged in, terrorist activity. It’s a tactic used by many countries to prevent citizens from returning when they’re perceived as a risk to national security.

These types of legal balancing acts between an individual’s human rights and national security are not uncommon. As Australian Prime Minister Scott Morrison has stated more prosaically, his job is to protect Australians from terrorists “enjoying privileges” of citizenship. But that view overlooks the situation of two other individuals. Aged five and under, they are presumably not suspected of terrorist activity. Legally, this raises questions about the justification for limiting their citizenship rights.

Where do the children stand?

In spite of the seeming intractability of the row between the two countries, the situation facing these children needs resolving. Key to that will be the recognition that children enjoy the same human rights protections as adults under the general framework of international human rights law. They also have particular and specific protection under the UN Convention on the Rights of the Child 1989.

Both Australia and New Zealand have accepted these international legal obligations, meaning a number of the provisions of this convention must inform both countries’ decisions in this case. The convention opens by stating that the family is “the fundamental group of society” and the child should grow up in a family environment. Similarly, involuntary separation is to be avoided, unless it is in the child’s best interests.

The right to a nationality

The case also raises questions around the balancing of national security and human rights. For the children involved, a number of the convention’s guiding principles underpin these rights. As part of the prohibition of discrimination, states are required to ensure the child is protected against all forms of discrimination or punishment on the basis of the status or activities of the child’s parents.

The best interests of the child should govern all decisions relating to them, and the child has a right to be heard in all proceedings affecting them. The child also has the right to life, survival and development. Given reports that a third sibling has died of pneumonia, this right and guiding principle takes on real significance.

In essence, then, the rights of the child must inform any decisions about the future of these children. As part of that process, the maintenance of relationships with the wider family unit — if not their mother — is still key and the child’s best interests must be taken into account.

These are rights, not privileges.

Claire Breen is professor of law at University of Waikato