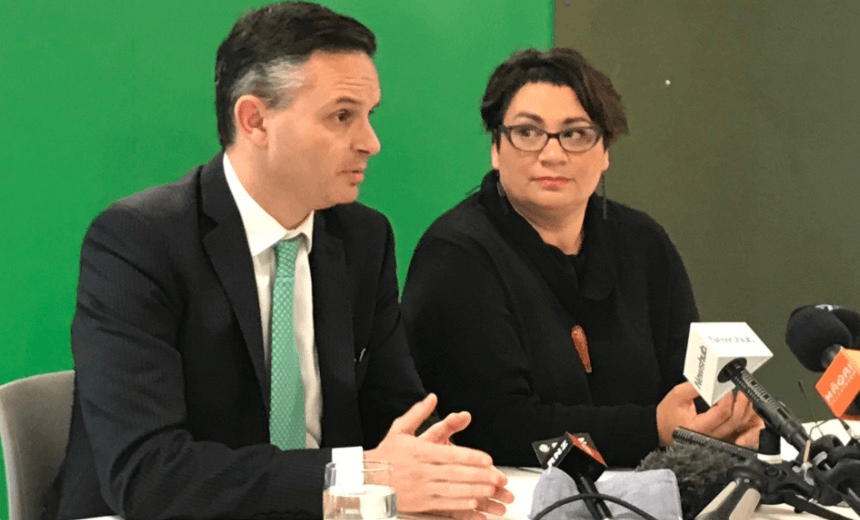 The Greens roar into election mode

The Greens had their annual conference this weekend: the perfect opportunity to provide the bold leadership and arresting policy they’ve been missing. Simon Wilson was there to find out if they took it.

It’s about leadership. Political parties can have the best policies in the world but if we don’t believe their leaders are trustworthy, likeable and bold we won’t vote for them. James Shaw and Metiria Turei, the Greens amiable but sometimes over-cautious co-leaders, have established trustworthy and likeable, but bold has eluded them.

Until this weekend. We saw a new Greens at AUT, tabling policy materially different to anything their opponents are selling. But more than that, it was delivered with agenda-setting power, and a knowledge of how media – both social and traditional – would absorb it. For the left, which was looking like it was going to watch another election slide by, it was the most impressive statement of the year.

They assembled at AUT and on the first day, co-leader James Shaw spoke. He’s the smoothly groomed co-leader who has never quite seemed to convince the party he’s one of them, but on that Saturday he got up and declared climate change must become “a top priority for government”. This, he said, was “why I am here”.

He attacked the government for buying carbon credits overseas. “Over the next 10 years,” he said, “New Zealand will send $1 billion a year to other countries to build their low-carbon economies and competitive advantages, instead of building our own.” And, “It is irresponsible… asking them to cut their pollution so we don’t have to cut ours.”

Shaw announced a Green Infrastructure Fund, to be partly paid for, in the short-term, by raising royalties on the oil industry from 46 percent to 70 percent. That would contribute to the $100 million government investment a year, to be used as seed money to attract private investment. The fund would become “the Kiwibank of the green economy”, with overseas experience suggesting that by 2022 there will be $1.2 billion of private investment helping to pay for renewable energy projects, energy-efficient buildings, production of biofuels and the like.

The challenge to every industry is to take the opportunity to grow the economy by transforming it: the goal is carbon neutrality by 2050.

He spoke calmly and clearly. He was provocative, describing government policies as “reckless” and “criminal”, but he was not shocking. Towards the end he worked himself up, raised his voice, he even got a bit emotional.

But James Shaw is Reasonable Man, not Excitable Man, and not Messianic Man either. When he finished the crowd got to its feet, cheering, but you do expect that at a party conference. This was not an astonishing display, but it was an authentic one. Voters always say they like that.

And then along came Metiria

The next day, along came Metiria Turei. The new policy she had to announce was to make poverty history.

Well, not entirely, you can’t just legislate it away. But this was, she said, the biggest change to the welfare state in 30 years. She talked about her own experience as a beneficiary and about others she knew, and she nearly burst into tears. “We will not be a government that uses poverty as a weapon against its own people,” she said. She got whoops and cheers for that.

She announced that all benefits will rise by 20 percent. The complex web of abatements will be simplified to just one rate. And it’s not just a change in payments, she said. It’s “a culture shift”.

It certainly is. With the notable exception of superannuation, New Zealand welfare has evolved towards the principle that help will be given those who deserve it. So eligibility measures include all sorts of tests – have you applied for enough jobs, how many hours exactly did you do work last week, how many nights do you let your boyfriend stay over?

Under the Greens, the operating principle will be that if people need help they will get it. “Why people are in need of help is irrelevant,” said Turei. To put that another way, the children of beneficiaries will not be punished for the perceived faults of their parents.

The minimum wage will rise, to 66 percent of the average wage by 2020. There will be a new children’s payment for low-income families with kids. The top tax rate, for people earning over $150,000, will rise to 40 percent. The bottom rate, paid on the first $14,000 you earn, will drop from 10.5 percent to nine percent.

There was a lot of excited cheering, especially when she said things like “The Green Party in government will immediately remove all financial sanctions and obligations that treat beneficiaries as criminals and second-class citizens”. By the time she neared the end of her speech the cheering had become so sustained she didn’t even deliver the last few lines. She didn’t need to. Metiria Turei rolled out a masterclass in how to get people excited and the formula was simple: emotional engagement plus radical policies to solve a problem your audience knows must be solved.

And, oh yes, as has been widely reported, she also confessed that when she was a beneficiary she lied to the Department of Social Welfare (as WINZ was called then) about her flatmates, in order not to have her sole parent benefit drop. Calculated to enrage the right and keep her in the news, of course, just in case the policies aren’t enough – and it worked, the story led both 6pm bulletins last night. If Bill English can make crappy pizzas and Winston Peters can abuse the media, you’d be a mug not to get into it, really.

The contrast with Winston Peters, making his own leader’s speech across town at the Vodafone Events Centre in Manukau the same afternoon, was marked. Peters staged his meeting as a public rally, not a closed party affair, so he had a bigger crowd. But the speech itself was bilious.

His language was Trumpian, designed to reinforce a sense of us vs them. He announced a reduction in immigration to 10,000 a year “as soon as we can train up our people in those jobs”, but under later questioning declined to say how many years that might take. He announced a bottom-line policy of a referendum on the Māori seats and the size of parliament, and that seemed like more of the politics of resentment too. He called the media “shiny bums” and “skid marks”, seemingly lost in private antagonisms.

At the end he declared, “The moneyed, the privileged and the special interest groups will do everything in their power, by fair means or foul, to stop us.” It played well, so never mind what it means. He got a big cheer on the way out.

How important was the Greens’ weekend?

When people have a go at the Greens they say the party is not progressive enough, or not environmentalist enough, or not welcoming enough of blue greens… or not something, anything, that’s different from what it is, at that moment, perceived to be.

Turei and Shaw just fronted on all that. With the Green Infrastructure Fund, Shaw reasserted the environmentalist heart of the party. The fund’s value runs deeper than that, however: it’s a practical demonstration of what it might mean for the economy and the environment to begin sharing goals – for New Zealand to develop an integrated, sustainable strategy for economic wellbeing.

“Climate change has economic causes,” said Shaw, “so the solutions have to be economic.” They’re going to make the polluters pay, which can’t be a long-term strategy because as they stop polluting the revenue flow will dry up – but it makes an awful lot of sense right now. Making polluters pay forces the market to take the lead and is a decisive mechanism for tackling climate change and reducing other environmental damage.

As for the question of whether the Greens might support a National government, the answer is implicit in both policies. The issue isn’t about “working with National”, it’s about wanting to be in a government genuinely committed to fighting climate change and poverty.

And Turei’s anti-poverty programme itself? Every other party to date has dismissed the goal as unattainable, unaffordable or unnecessary. But Turei says the Greens’ policies will cost about $1.4 billion – considerably less than the current budget surplus of $1.8 billion – and will mean no family with children is living below the poverty line. If she’s right, that would be a remarkable achievement.

What next? The Greens have their platform: compassionate, bold and future-focused, as requested. Will that make a difference to voters? As for Labour, it’s their call now. What will they do?