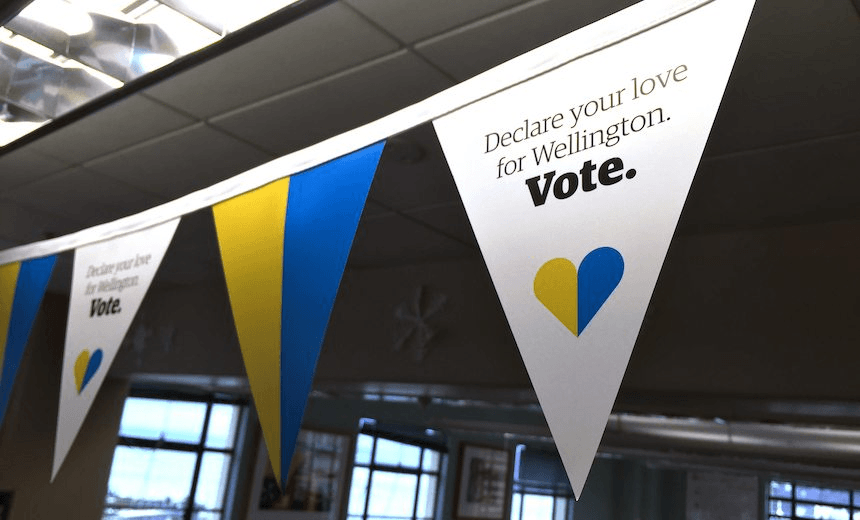 Sorry, chattering classes, but in Wellington voters are bypassing the old media gatekeepers

Despite all the headlines bemoaning apathy over local body elections, voter turnout is on the rise in Wellington. Jeremy Baker, communications director at Wellington City Council, sticks the boot into traditional media and trumpets the council’s polarising ‘Declare Your Love’ campaign.

Last week Bryce Edwards, the high-profile political commentator and academic, announced he didn’t vote in the local body elections. Writing for the NZ Herald, he implicitly endorsed similar sentiments from Newshub’s Heather duPlessis-Allen – who proudly claimed “non-voters are the clever ones” – and a bunch of other names from the Auckland chattering classes.

Edwards went as far as highlighting the anti-democratic musings of Mike Hosking, who had argued on Seven Sharp for “more [political] appointments, less democracy.” Hosking’s latest rant is entirely predictable: he has a long history of making statements specifically aimed at turning people off politics. Leave it, he says, to the grown-ups and experts like him and his mates.

The overall impact of this coverage is corrosive. At its worst, it plays into a democratic death spiral: the chattering classes are now saying that voting is neither cool nor useful, and it’s just too hard.

Edwards noted that this year’s voter turnout was set to be a record low. In fact preliminary figures now suggest turnout was up (very slightly) from 2013. Even more strikingly, he did not mention the significant jump in voting this year in the capital city.

This was clearly an inconvenient truth that interfered with his cynical storyline. In Wellington our turnout increased to 45.5 percent, from 41 percent in the 2013 elections.

Older observers haven’t seen such voter interest in a Wellington local election since flamboyant businesswoman Carmen took on Sir Michael Fowler in the late 1970s. Admittedly Carmen had an agent provocateur – a young Bob Jones – running her campaign, but she ran Sir Michael hard, to the glee of the media, the community, and voters.

Last weekend’s turnout is one of the highest since 1992, when Wellington turned to postal voting – and lifted turnout to around 53 percent – after years of declining turnouts at the ballot box on local election day.

This year in Wellington we had a real race for the mayoralty, with several front-runners in with a great chance at winning. It piqued the political instincts and appetites of Wellingtonians.

Despite the frustrating constraints imposed by electoral legislation, Council ran a smart advertising and marketing campaign aimed at motivating voters. The “Declare your love for Wellington” campaign made heavy use of social media and featured striking large-format street posters.

They clearly had an impact: the posters annoyed the local hipsters and politicos to such an extent that they were defaced and reworded. Our favourite was the poster that mentioned bristly beards and craft beer – we ventured into hallowed Wellington territory there and the tagging pens came out. Hell hath no fury like a hipster scorned; we haven’t seen such furious (and witty) political graffiti since the Springbok tour.

In his column Edwards suggests “maybe there’s fault with the media too” in apportioning blame for the declining national turnout. And to a large extent, he’s right.

In Wellington, individual reporters did their best to provide decent coverage, and many were superb. Big shout-outs to Michael Forbes at the Dominion Post, Nikki Papatsoumas and Sharnahea Wilson at the Cook Strait News and Independent Herald community newspapers respectively, and Tim Fookes and the journalists at Newstalk ZB.

Forbes, a young guy with old-school journalistic sensibilities, provided excellent, level-headed coverage of the election race – and local politics in general. For some time now, he’s been doing the heavy lifting for the DomPost on issues like the proposed Wellington Airport runway extension and other transport proposals for the city and region.

But Forbes is, like so many Fairfax journalists these days, unable to devote all his time to a traditional news round. As far as we can tell he gets pulled off the round frequently in order to, presumably, contribute coverage on rugby players in toilets. So the DomPost’s coverage of the elections was patchy at best.

It is perhaps an indication of Fairfax’s straitened financial situation that, unlike in previous elections, the DomPost was unwilling or unable to do its own polling on the Wellington mayoral race. But maybe that was for the good – left to their own devices, voters realised they didn’t need the DomPost’s nudging and political browbeating to do their civic duty.

Wellington voters, traditionally faithful Radio New Zealand listeners, also got out in bigger numbers despite largely being ignored and abandoned by the national broadcaster. To say RNZ’s Wellington election coverage was threadbare compared to the attention paid to the Auckland race speaks volumes about where the national broadcaster is putting its resources these days.

Dear old RNZ even sent John Campbell off on a presumably expensive and definitely pointless bus ride with the Auckland candidates – even though most people knew the Auckland race was drawing to a fairly predictable conclusion. No such bus ride was offered to our candidates.

The less said about TV the better. TVNZ gave the runners in the Wellington mayoral race about one minute at the back end of a Sunday 6pm bulletin in the weeks before the election. TV3’s The Nation ran an entertaining Wellington mayoral debate at the start of the race – but the show’s weekend-morning scheduling means it barely registered with the voting public.

Some local political coverage is now provided by the Wellington Scoop website. Unfortunately Scoop depends a great deal on the DomPost for sourcing its content – so when the Dom is not breaking stories, Scoop struggles to find anything to write about.

We’re finding what many others are also finding – that the humble community papers are growing in importance in terms of getting local news into local households. In Wellington the Cook Strait News and Independent Herald were ditched by the predecessors of NZME several years ago and are now run by a small publishing company. They dig deep into the community and, anecdotally, are heavily-read by Wellingtonians. Their journalists work bloody hard and don’t go easy on the Council, or indeed any other institution that needs close scrutiny.

Yes, they’ll publish some of the Council’s fluffy news releases but generally, like any traditional news organisation, they stick to stuff they think the community wants to read.

Wellingtonians, being a political lot, have clearly learned to bypass old media gatekeepers in order to get their intel on who to vote for – and that should be an object lesson for the mainstream media as they rapidly lose their audience in this city.

At Wellington City Council we’re considering following international trends and launching a media centre to generate visual content not only for the mainstream media, but for our own online channels, for social media, and for whomever else who wants to use it. Our experience during the run-up to these elections just made the argument for such a set-up that much stronger.

Over the next three years we want to establish some good conversations with our communities about our vision and our development projects (both economic and social) and work with them on issues they care about. If we can do that, by the time the next election comes around we will have a community that’s happy to continue that conversation within the democratic process.

At Wellington City, we’re not prepared to give up and go down the anti-democratic path espoused by the likes of Hosking. We want to build on the relative success we’ve had this year. We’ll be pressing the government hard to return to a trial of online voting.

We’ll also lobby for some changes to electoral laws to make it easier for local councils to promote elections. At the moment it’s almost impossible to make an election interesting or attractive. But what’s wrong with a little provocation – or inducement? How about: “Vote today and go into the draw to win a round-the-world cruise, or one year rates-free”? It certainly would get my vote.