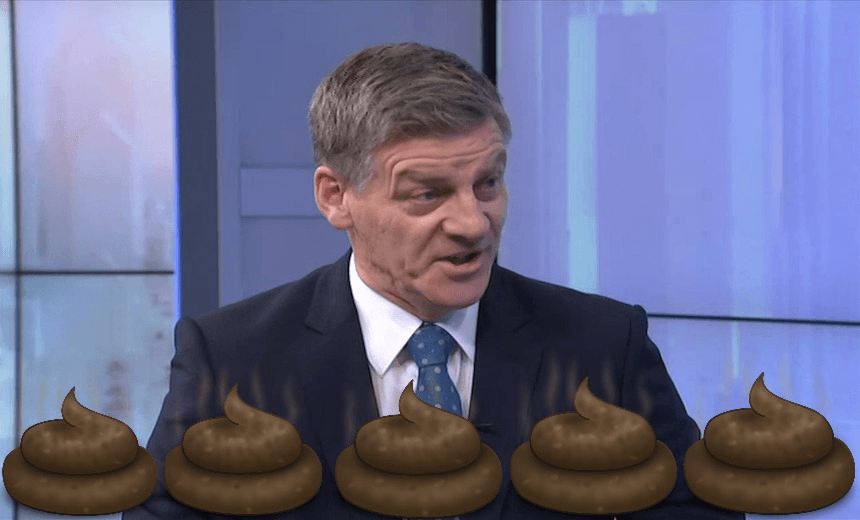 Why did Bill English raise the prospect of slaughtering the dairy herd yesterday? As farmers prepare to protest in Jacinda Ardern’s hometown Morrinsville, Simon Wilson wants to know why we are suddenly being asked to believe there is a deep urban/rural divide.

I’ve driven through quite a bit of the North Island in the last few weeks and I’ve seen more National Party hoardings than for all the other parties and candidates put together. Far more. I assume it’s the same in the South Island: National has blitzed the countryside.

Those hoardings speak volumes about this election. They didn’t put themselves up: they’re evidence that National has a large, well-organised support base in rural New Zealand who are out and about rustling up votes. Good on them, that’s what they’re meant to do. They also reveal that outside the cities, Labour doesn’t have much of an organisational base. Apart from some Maori electorate hoardings, Labour is almost invisible in the countryside. NZ First and Hone Harawira are both reasonably visible in Northland, but even they have nothing like the coverage enjoyed by National.

But what is National saying to its rural support base? It’s not just that Labour is a tax and spend party, or that Labour’s water tax will cripple good honest farmers. Bill English told the nation on TVNZ’s Q&A yesterday morning that the consequence of the water policies of the “opposition parties” was to “slaughter the dairy herd”. He then said, “The next thing they’ll be talking about: depopulate the cities, because they cause water pollution too.”

This, by the way, was shortly after he’d denied he was leading a campaign of lies and scaremongering. Whatever happened to Honest Bill?

For the record, Labour’s policy on the size of the dairy herd is the same as National’s: both say we’re probably reaching capacity, but decline to say there are too many cows. Both believe the future of dairy lies in increased productivity, not growth in stock numbers. (To compare all the party policies on water and everything else, check out our Policy tool.)

The Greens’ policy is different. They want to reduce the herd by 30-35%, using financial incentives that are set out in policy, over a period of 30 years. As any farmer will tell you, that does not mean a single cow has to be taken out and shot.

And the water tax? Labour wants to put a tax on water to pay for restoring the quality of waterways. Bill English on RNZ last week described it as “a $50,000 or $100,000 tax”, and Steven Joyce has used those figures too. Are they right? Some fact checkers have looked at the claim by using averages across the dairy sector, but Dairy NZ says there is a more accurate way to do it. So let’s use its figures.

Dairy NZ says there are 2000 dairy farms using irrigation. Most of them are in the South Island and are much larger than the average NZ dairy farm. According to Dairy NZ, Labour’s water tax would cost those farms an average $45,000 per year. Close to the low end of English’s range, but nothing like the $100,000 he also mentioned. There are 10,000 more dairy farms in New Zealand that do not use irrigation. Dairy NZ says they would pay $240 a year.

Of course, lots of other farmers irrigate too. But they don’t use anything like the quantity of water required by the South Island’s new industrial-scale dairy farms. Those farms exist only because of irrigation, and despite environmental programmes to mitigate the damage, they are degrading the waterways. That’s just fact. Is it unreasonable that they should help pay for more concerted action to clean up those waterways?

The Greens prefer taxing pollution rather than the water itself. They estimate their policy would reduce the profit of an average dairy farm by about 6%, and again, the tax package comes with incentives.

It’s revealing in many ways that Bill English thinks it’s okay to get farmers enraged at Labour and the Greens. One is that he appears to believe his reputation for integrity is unassailable. Another is that his party knows slander works, and they’re not above using it. We knew that already, most recently thanks to Steven Joyce and the so-called $11 billion hole in Labour’s budget. That was a fiction English himself would have taken part in creating and which he continues to promote – he did so on that same Q&A programme.

A third thing to note is that English is clearly not trying to win urban liberal votes. He’s already got all of those he’s going to get, on the basis of other policies. He’s going hard after the rural and provincial votes – not people thinking about voting Labour or Greens, but the NZ First supporters.

And a fourth thing, the scariest thing, is that if English thinks it’s OK to insinuate that Labour is going to start slaughtering cows on national television, what are he and his colleagues telling people when there are no cameras present?

We saw the version of his campaign message English thinks is fit for public consumption. In the cottage meetings, the sector group meetings, all the electorate meetings, what else are National candidates telling people Labour and the Greens want to do to rural New Zealand?

OK, you can argue that both sides do it. But do they? Are other party leaders and candidates peddling lies and scaremongering about National? I’d like to hear some evidence for that.

David Parker, who is Labour’s spokesperson on the environment and water, was reported on Twitter as telling a meeting of Canterbury farmers, “Don’t push me or it will be 2c instead of 1c”, which was reprehensible and stupid of him, if true, but not the same as telling lies about your opponents.

The damage all this causes is hard to overstate. What National is doing is using the election to create a deep rift between urban and rural New Zealand. It’s a division that doesn’t fundamentally exist: sure, rural people might be more conservative, but unlike, say, the United States, we don’t have a deep and defining culture war in this country.

Environmental values are widely held in the countryside and the economic importance of agriculture is well understood in the cities.

But if this divide takes hold, how is the next government – whoever forms it – going to get on with the vitally important task of helping farmers marry economic and environmental goals in rural New Zealand? Cleaning up the rivers, bringing agriculture into the battle against climate change, and at the same time creating more wealth for all? It’s a countrywide task, and we all need to be on board for it.

It’s an urgent task, too. But National is signalling simultaneously that it doesn’t care about the task and that it’s happy to poison the well, so to speak, for whoever governs next. Setting out to persuade the rural community that urban liberals are their enemy and National is their only friend is an appalling failure of moral leadership.

Expect a swing to Labour in the bigger cities and a swing to National in the countryside. And in the provincial cities? Do their citizens feel more urban or more rural? My guess: rural. Antagonism to Auckland (and to “the bureaucrats of Wellington”) will play a part in that.

As for the farmers’ protest in Morrinsville today, I’m looking forward to hearing from farming leaders who are going to help lead us forward as a nation, not stir up unfounded fears for the electoral advantage of the National Party. It could happen. Couldn’t it?