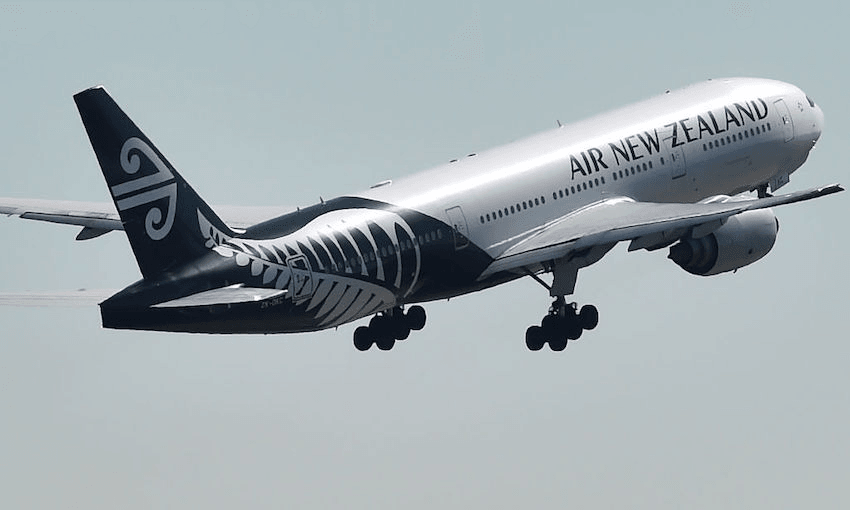 It’s hardly surprising that the story has faded from front pages, writes Amal Samaha – forgetting is just what we do when it comes to uncomfortable truths about New Zealand’s actions overseas.

Early last week it was revealed that Air New Zealand’s gas turbine division was supplying the Saudi Arabian Navy with parts and engine repairs. After all, turbine engines undergo a lot of wear and tear zipping around the Red Sea, blockading food shipments intended for an estimated 2 million children under five on the verge of starvation.

By the next day, work on the engines had stopped, albeit only after most were complete, an inquiry had been launched, and Air NZ had made a lot of promises about its future conduct. Deputy PM Grant Robertson (who initially supported the company’s stonewalling) received apologies from the chief executive and the PM made a statement about how disappointed she was.

But that wasn’t enough. Last Thursday, Air NZ made further apologies before parliament. You see, they were very, very sorry. But no, they would not be answering questions about their other military contracts.

On Friday even former CEO Chris Luxon emphasised his lack of involvement, saying that ensuring Air NZ executives are aware of military contracts – and thus possible complicity in war crimes – will be a “good challenge” for the company going forward. I’m glad the execs are going to get some healthy brain exercises out of all this.

By the weekend, everything was forgotten, and understandably so given the reemergence of Covid-19 in Auckland.

But the forgetting of the Air NZ-Saudi scandal began much earlier than the latest Covid outbreak. As the specifics of each apology and denial faded into one another, familiar patterns emerged. Let’s look at the media and government narrative that evolved out of this scandal, starting with the prime minister’s statement.

On the surface it was a pretty normal response. Until you remember that the scandal she was talking about involved a six-year-long illegal invasion by western-backed absolute monarchies that has killed 233,000 people, and not a minor lapse in judgement like an MP caught not wearing a mask.

Ardern said the contract is not appropriate. It doesn’t “pass the sniff test.” It’s “disappointing.” She was concerned with damage to New Zealand’s reputation. Astoundingly, she used the opportunity to emphasise that Air NZ’s executive knew nothing about the deal, before any inquiry or parliamentary hearing to establish the facts.

There is no room for the 144 children who are dying in Yemen every day in a dispassionate statement like this. But more so than the moral implications of her wording, I think we should question the growing consensus that Air NZ higher-ups had absolutely nothing to do with the scandal, an idea we have been primed for long before any inquiry has taken place.

More than anything else, it is frankly bizarre that such a narrative was repeated uncritically when Air NZ chief executive Greg Foran stated he has knowledge of 10-20 other military engine contracts, but couldn’t reveal any details. As Green MP Golriz Ghahraman said during the parliamentary hearing on the Saudi revelations, it is galling to hear “they had no process in place to ensure that they weren’t literally committing war crimes via those contracts”. Was this not the responsibility of the chief executive?

Instead the results of the inquiry are entirely predictable, and the media has already been primed for the findings. The inquiry will be dutifully held, and will dutifully deliver its findings that all the blame can be isolated to some middle-management box-ticker “about four levels down” from Greg Foran. Any other finding would make a liar out of the PM and an embarrassment out of the national carrier.

I hope I’m wrong. After all it was amazing that the allegations went so far without falling out of the news cycle. But in the end they did, not because Covid them out of the spotlight, but because forgetting is our national speciality.

Usually such scandals are minor news, if they register at all, and they never stay in the media long enough for the public to draw conclusions and make connections. It’s extremely easy to forget the broader historical pattern of New Zealand’s complicity in global imperialism when a week-old exposè already feels like it happened years ago.

Whenever a new story rises up about New Zealand’s involvement in war crimes there is a strong sense of deja vu, even amidst the pressure to forget.

Remember that New Zealand never found out about its manufacture of chemical weapon Agent Orange for the US war on Vietnam until decades after the fact, when veterans’ organisations pushed the issue.

Nothing much ever came of the discovery that New Zealand’s involvement in Iraq was a ploy to prop up Fonterra’s lucrative Oil for Food contracts.

Only the tireless work of investigative journalists exposed New Zealand war crimes in Afghanistan, the GCSB’s integration into the US’s NSA and ECHELON spy network, or CIA-backed companies using New Zealand as cover for the launch of targeting satellites. At every stage they had to work against attempted state cover-ups or webs of corporate disinformation.

There was no government pushback against companies which manufactured arms used in those very same war crimes using New Zealand as an international trade forum, only community action stopped that.

Hell, this isn’t even the first time a New Zealand company was found to be supplying parts and services to the Saudi Arabian military. MAS Zengrange, based in the Hutt Valley, used to proudly admit that their mortar and artillery targeting systems were being used by all of the militaries currently bombing and starving Yemen. Even after peace groups protested the shameless display, there was no media or government response.

The Air NZ scandal was only different because government shares were part of the equation, and the national carrier is central to New Zealand’s brand.

If Covid-19 hadn’t struck when it did, I’m confident the government would have pulled out all stops to avoid damage to that brand. We would have heard a lot about how imperialist wars simply don’t align with New Zealand’s values, or its reputation on the world stage. We would have heard about how leaders were disappointed, and how things like this simply aren’t who we are.

Remember that all of the above instances of participation in war crimes “passed the sniff test”. Remember that they were utterly consistent with the values of whichever government turned a blind eye at the time. Remember that the companies involved aren’t apologising for their mistakes, they’re sorry that their deliberate actions were uncovered.

Call the attempts to sanitise and atomise the narrative what they are: gaslighting. The preservation of New Zealand’s international brand is paramount because it allows us to sweep a pattern of pro-imperialist actions under the rug. It allows governments to get away with immoral acts by feigning ignorance, shock or concern. We are locked in a cycle of forgetting.

That process of forgetting started the day after the scandal broke with the PM’s preemption of any suggestion of blame for Air NZ’s higher-ups. It is not the fault of whichever mid-level employee signed the deal, it’s not even the sole fault of the executive. It’s systemic, and the solution starts with remembering.