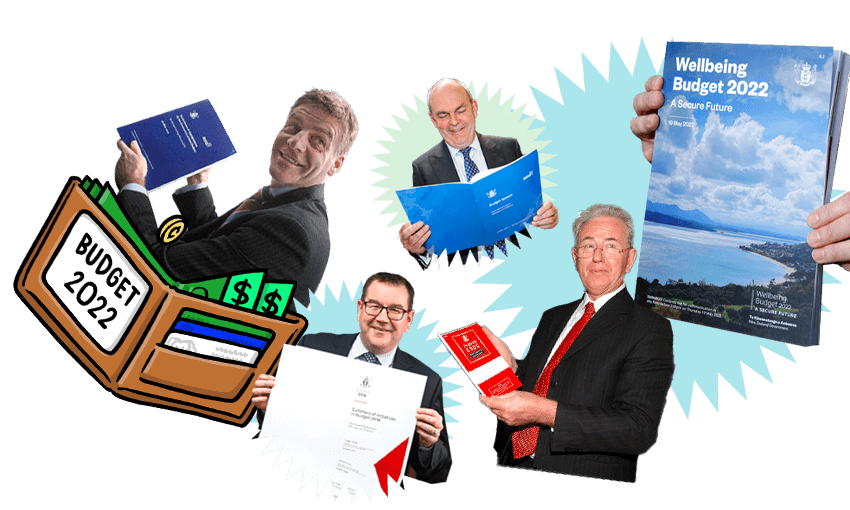 Wha fills you with more fiscal confidence: a stock image of a picturesque landscape, or the same shade of blue year after year after year? Reweti Kohere surveys the last 21 years of budget cover designs.

It’s an annual tradition for the minister of finance to stand in front of a barrage of cameras and grin like a Cheshire cat as they pose with a freshly printed document that will come to define their time holding the country’s purse strings.

More often than not, the cover has been printed in whatever colour represents the government of the day – Bill English used more or less the same shade of blue for seven of his eight budgets as National’s finance minister, while a Labour red adorned the budgets of the late Michael Cullen. More recently, however, Grant Robertson has favoured picturesque landscapes and smiling people to convey his “wellbeing” budgets, which use social and environmental indicators, plus the typical economic and fiscal ones, to guide the government’s funding decisions. This year he even took the photo himself.

A lot of design is about setting tone and signalling intentions, says The Spinoff’s creative director Toby Morris, and the budget is about as serious a document as you can imagine. “You’d want to be signalling competency and reliability – that it’s a sturdy, sensible, smart plan. So that means solid, clear dependable fonts, sensible solid colours, nothing wacky.” The Spinoff designer Tina Tiller adds that there are many ways to handle political imagery. A “mellow, broad” approach can help convey balanced or information-heavy pieces while stories about politicians or political parties might benefit from including associated symbols and colours or might warrant images that satirise them. “All these things help contribute to ideas,” she says.

Armed with this knowledge, it’s time to rank the last 21 years of budgets from worst to best.

There’s no design fluff with Grant Robertson’s maiden budget, labelled Foundations of the Future – and it’s hardly surprising. Intent on coming across as a prudent handler of the country’s finances, the finance minister pulled back the reins and said “I want nothing fancy, just a large red triangle in the corner that tells people to turn the page.”

I appreciate that the Beehive, stamped on the late Michael Cullen’s budget covers from 2005 to 2008, imbues the documents with executive authority. And sticking with what you know never frightens the horses. It’s just that it never excites them either.

As someone who loved buying new stationery at the start of every school year, to me Cullen’s 2003 budget cover looks like an exercise book with room in the middle to write my name and “Maths”, “English” or “Social Studies”. I’ll take five, thanks.

Much like 2005 to 2008, the Beehive features prominently on these budget covers. But these ones deserve a higher ranking because the colour blocking takes your eyes from top to bottom and left to right. It’s as if Cullen held out his hand and said “here, let me guide you through my fiscal plans.”

Squint hard enough and you can just make out grid lines dotting Bill English’s final budget as finance minister before he took over as prime minister. Squint even harder and you can see “New Zealand” etched on the cover with an outline of the North and South Islands, like some antiquated map drawn up by imperial, colonial powers. This is by far the most radical design of English’s tenure.

Steven Joyce presented only one budget during his stint as finance minister, but the cover conveys more about what would happen in the remaining months of an election year than any of the preceding budgets. The outlines of Aotearoa, disappearing and then reappearing as the motif crosses the cover, suggest a changing of the guard – except not the kind National wanted.

You’ve got to hand it to Mr Consistent – sometimes sticking with the tried and true pays off. Starting with his maiden budget in 2009, which arrived in the wake of the global financial crisis, an economy in recession and rising national debt, English wanted people to know he was a steady, safe pair of hands that they could place their trust in. Seven years later, the same shade of blue adorned his 2015 budget. It’s audacious – unlike Cullen’s same-same budget covers above, English’s versions rely on one motif. It’s the starkest reminder of which party held the purse strings during those years.

Including pictures of beaming people is a guaranteed way of showing the public that you care about people. Except it pays to double-check whether the happy humans are actually ecstatic about living in Aotearoa. The fact that Vicky Freeman, pictured with her daughter on the 2019 budget cover, moved away from New Zealand for a better life in Australia wasn’t the message the government wanted to sell about its second wellbeing budget. Robertson’s red and plum paisley tie on the other hand? Delish.

The 2020 budget arrived just months after Covid-19 breached New Zealand’s border. So it’s either heartening or daunting to look at the cover and see a visual representation of what would await us in the following years. There’s nothing like a mountain range to communicate the enormity of the challenge you face. But like with any adversity, reaching the top is why you try to overcome it. After Sir Edmund Hillary summited Mt Everest, he famously quipped “we knocked the bastard off”. When might Aotearoa be able to say the same thing?

On Monday, the government unveiled its almost $3b plan to ensure the country doesn’t exceed emissions beyond the new carbon budgets set last week, as we prepare to pursue net-zero carbon by 2050. The next day, Robertson unveiled this year’s budget cover. What better way to show you’re securing a future for clean, green New Zealand than by taking a piccy of the land of the long white cloud, complete with golden sand beach, verdant bush and shimmering waters. Never mind climate change and the devastation that awaits us, the future feels more secure already.

Every now and then, an image or video will appear in my Instagram feed of Aotearoa from outer space. It’s a humbling reminder of how teeny-tiny we are in the grand scheme of things. But, in the context of a global pandemic entering its second year, it was smart for Robertson’s 2021 budget cover to connect the team of five million to bigger forces at play while also training our attention on what we, as a country, needed to do to get through and recover. We’re still climbing Mt Everest; we haven’t knocked the bastard off yet.