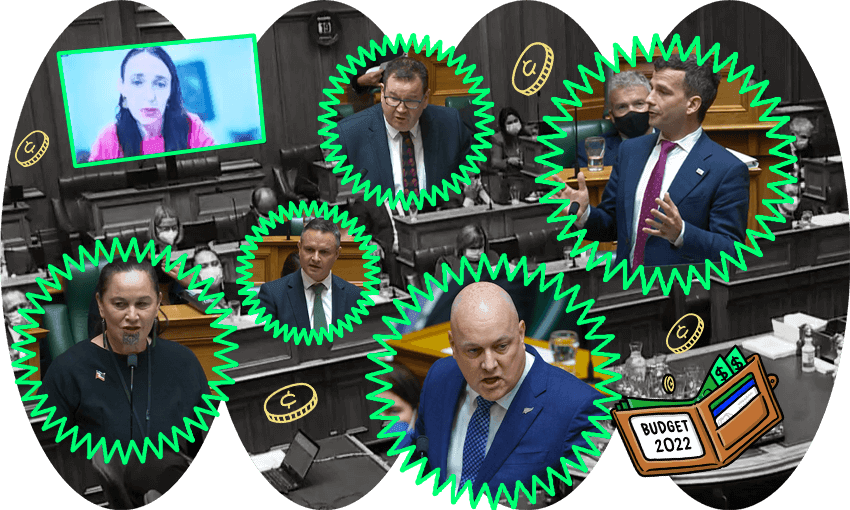 After the budget numbers comes the budget debate. Toby Manhire tunes in to the parliamentary theatre.

On a budget day Facebook Live this morning, Jacinda Ardern revealed she had lost her sense of taste. She was talking about the cheese rolls, but you knew it was true from the tie she’d bought for Grant Robertson. Isolating at home with the coronavirus, the prime minister had followed through on the buy-Grant-a-budget-day-tie ritual. He unwrapped it on an Instagram video and it was hideous. Imagine if a migraine got a migraine: this was it, a constellation of terrifying red orbs on a navy blue background. For reasons unknown (sympathy for his Covid-struck colleague, perhaps, or just sheer shock at what he’d just seen), Robertson declined to look at the second tie option she’d sent, which it’s impossible to imagine could have been worse. “No, no, I’m happy with this,” he lied.

The neckwear dominated proceedings in the parliamentary debate on the budget. At 2pm, it rose to its feet in the House of Representatives, the evil orbs bouncing off the red dispatch box. Grant Robertson followed several minutes later. The tie had been chosen, Ardern said earlier, to symbolise isolation bubbles. After saving us from the pandemic, said the tie, or Robertson, it wasn’t obvious which, this budget was “laying the foundations for the future”.

Robertson is consistently the funniest speaker in the debating chamber, but today, tie notwithstanding, it was full Mr Secure. Mr Balance. The benches were well drilled, bursting into applause on cue. The peroration laid it out: we smashed Covid, now we’re securing the future, if you don’t mind. The Labour MPs took to their feet. The Green MPs looked around awkwardly, and eventually stood too. Robertson’s tie took its seat.

Christopher Luxon was up: his first turn at the unenviable task of pretending that his speech wasn’t written before they’d so much as glanced at the budget. They’d thought about calling it “the blowout budget”, said the National leader, wiggling his shoulders. They considered “the Band-aid budget”, he said, banging his finger on the desk like a furious pedestrian at the lights. “But we landed on the backwards budget.” Backwards, he said, 25 times. Backwards! Everything was going backwards, including “outcomes”. Just backward of Luxon was another Chris, Chris Penk, who used every part of his face to commend the speech his leader was giving. For every holler of backwards, his eyebrows gathered together for a short conference on the grotesque backwardness of it all.

They’re “addicted to spending”, said Luxon. “Fnggrrrrrr!” roared one of his MPs in agreement. All the other MPs cheered. He had three glasses of water beside him, fuel for those oratorical jet engines. His tie, mercifully, was a sensible tie. “A National government in 2023,” he declared, and his colleagues surrounded him in applause, laying their hands upon him like the Saudis and Trump on a glowing orb. For the first time in a while, the National MPs did not look like they hated their leader.

The speaker then reached for his remote control, and beamed the prime minister in on the screen. She offered no apology for the tie controversy, instead talking about “life itself” and “the great depression” and “the uncertainty of war”. Mallard could be heard mumbling something to the clerks. The opposition jeered, but we couldn’t see them on the livestream, just Jacinda Ardern with her blurred background and her earrings in bubble-shaped gold. Her colleagues applauded, she grinned, and someone forgot to turn her off; she hovered there, still grinning, as James Shaw got into his bit.

And his bit began with a denunciation of the speech from Luxon, as well as a denunciation of the speech David Seymour was yet to give. He traversed the ages: from Maximilien François Marie Isidore de Robespierre to Ruth Richardson to Winston Peters to Mike Hosking’s exploding head. “This budget would look different,” he said, if it had been a Green budget, but it wasn’t a Green budget, but also it was better because the Greens were kind of in the tent. His colleagues didn’t look very much like they were listening, but they sprung to their feet at the end, clapping like devoted parents trying to cover for nodding off briefly at the end-of-term assembly.

Channeling his spirit animal, Eminem, David Seymour said Robertson had failed “his one shot” to save the nation from a once-in-a-lifetime brain drain. He accused the finance minister of plagiarising – and I kid you not – the Saskatchewan budget of 2007. As members of parliament flowed out of the house, he brought it back on course by declaring the only secure future that was being provided was Australia’s. He said something about the “culture of victimhood”. He railed at “greedy, grabby Grant”. On a disappointing day for props, he gripped Act’s alternative budget in his fist, and talked about communism. Excellent magenta tie.

“That is the first time I’ve stood up with Act clapping,” began Debbie Ngarewa-Packer, as Act clapped. She liked some parts of the budget, but the Māori Party co-leader chided under-investment in the Māori Health Authority. It was 0.7% of the total budget for the new health agency, she said. They’d sought 2%. “Even on that basis it would take 1847 years to reach parity.” As she finished up, the rest of her caucus, aka Rawiri Waititi, stood behind her, hands extended beyond his surgical mask, cowboy hat and taonga instead of tie, applauding as if his life depended upon it, exorcising every red orb from the room.