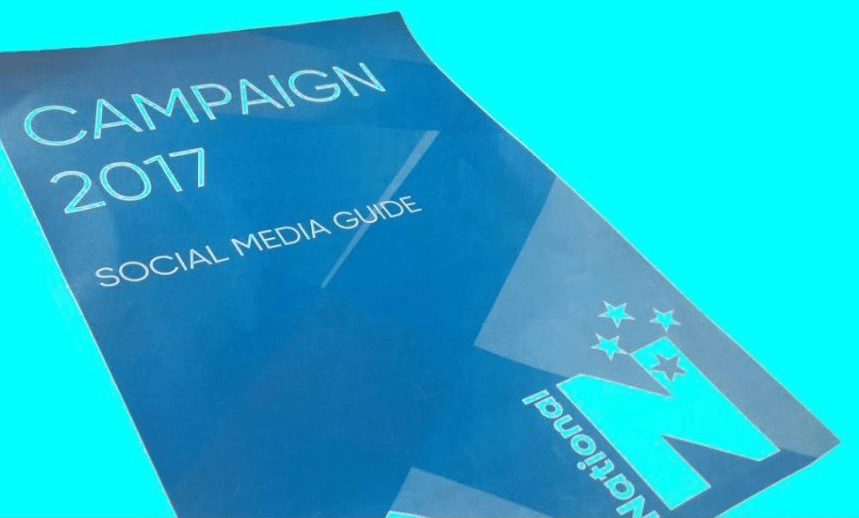 A 10-page advice sheet for candidates on using Twitter and Facebook and the rest has surfaced. And Nicky Wagner has helpfully provided a real-life example of what to avoid. Toby Manhire reads the rules.

“While there is no substitute for traditional, on-the-ground campaigning during an election, every candidate running for parliament needs to have a social media presence that is carefully managed, authentic, engaging and professional”, goes the introduction to the National Party’s social media guide.

It then moves, swiftly, tellingly and sensibly, to the first heading: “THE RISKS”. Candidates are urged to consider “the front page test”; that is: “If the content you are going to post would end up on the front page of the NZ Herald, don’t post it. It can be damaging to you, other candidates and the party as a whole.”

Titled Campaign 2017: Social Media Guide, the document was discovered loitering unshackled within the MyNational website by politics and media blogger Matthew Beveridge on Friday. And within two days a teachable moment had sprung up, thanks to minister for disability issues Nicky Wagner.

And another try, this time with one of those half-baked apologies:

For all that Bill English attempted to shrug off the Wagner-clanger, asserting in his interviews this morning that the disability community is not exercised by the “storm in a teacup” around her tweet, and that it had been “misinterpreted”, some are livid, such as this parent who on Public Address acknowledges Wagner for “letting us know without room for misunderstanding, that disability is inconvenient for her”.

Wagner’s tin-eared tweet was nevertheless a splendid illustration of the next point made in the guide: “Digital brand = personal brand: Your online presence is an extension of yourself and contributes to your image and brand, so think carefully about what you post and how it reflects on you.”

That’s hardly a controversial thing to say, but it’s a reminder, were any needed, that prime ministers and their pineapplified pizza posts exist very much as part of a branding strategy. And in that context, Wagner’s tweet is helpful only in opposition efforts to brand National as afflicted with third-term-itis.

On the whole, the National Party social media guide is a useful set of advice for candidates, even if you wonder whether anyone who needs to be told that “it is not relevant to share a post about new funding for a school in Auckland Central if you are based in Dunedin” really should be standing for parliament. Mind you, there’s a minister of the crown who tweets about how they’d rather be on the harbour than in disabilities meetings, so you can’t be too careful.

Another snippet of note: “Show you are busy, hard working, accessible and approachable”. And: “Funny not nasty. Avoid attacking opposition MPs if you are a new candidate. If you are a sitting MP, be funny, factual and not nasty.” Easier said than done. Tau Henare, who earned the sobriquet “minister of Twitter” until he was gently shepherded off the National list, was funny, but very often nasty at the same time. Ditto Judith Collins, before The Incident. Former NZ First MP Asenati Lole-Taylor’s tweets were very funny, but it sometimes felt nasty to laugh at them.

But that’s all just Twitter. As the social media expert gurus at the National Party point out, it has “a much smaller, less mainstream audience than Facebook.” One of the main reasons to use Twitter? “It can be useful to get your message out to local journalists.”

Still, be warned: “Twitter is a high risk medium. Only create a Twitter profile if you are a confident social media user. Since it is so easy for journalists and opponents to follow you, a lapse in judgement or even a typo can land you in trouble, Nicky.”*

Keen candidates might annotate their social media guides with the freshly articulated advice from the boss this morning. “This is a product of the Twittersphere, which tends to be negative whatever happens,” said English, metaphorically wiping the tinned spaghetti from his chin.

Candidates are further warned not to “express personal opinions about policy”. Why not? “Policy tweets should be on message, when they are not, it is a risk to the party and your personal brand. Many journalists would love a scoop about a candidate disagreeing with their party.”

And there’s something a bit wonderful about this advice: “Keep your tweets brief. You only have 140 characters to work with.” It conjures the image of a would-be parliamentarian bashing away at the keyboard, bewildered by the machine’s failure to publish the treatise.

There is encouraging counsel on Facebook, Twitter, and Instagram. The National Party is not, unlike David Seymour and Helen Clark, yet ready for the snaps, however. “At this time, it is recommended that MPs and candidates avoid using the Snapchat app as a public social media platform, Nicky.”* No mention of Tinder, so that must be fine.

All told, the National Party social media guidelines encourage an anodyne online presence. They are a recipe for dullness. And much as it pains me to say it, that’s pretty good advice.

There is, however, one part of the advice that bushy tailed aspiring MPs would be careful to think twice before following too dutifully. It comes in the section on Instagram, directly after the suggestion to “consider using emoji icons where appropriate e.g. a tick at the end of a sentence talking about voting or a smiley face”.