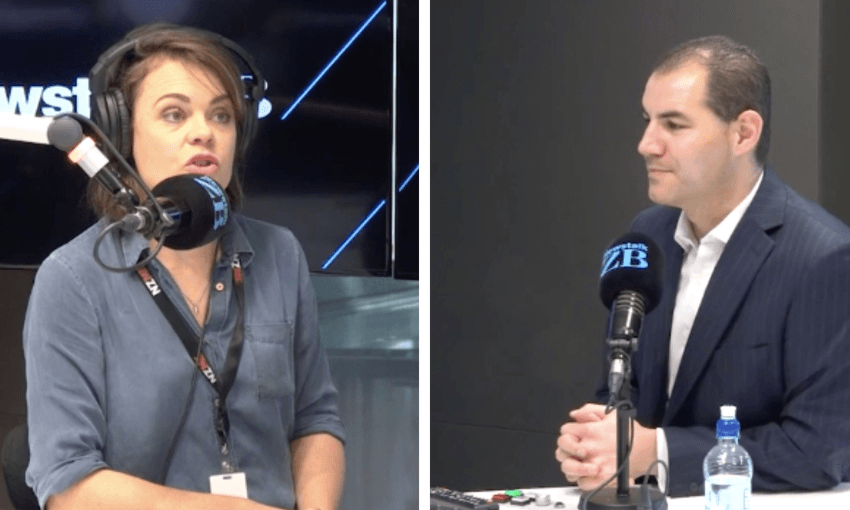 In an astonishing interview on Newstalk ZB, Jami-Lee Ross has taken the principled stance of not resigning to fight a by-election he has no chance of winning. Will Simon Bridges now look to the waka jumping law?

Throughout this week, rogue National MP Jami-Lee Ross has shown himself accomplished at the marathon press conference. Tonight, he revealed a hitherto unknown media talent – the train-crash one on one interview.

He decided to go head to head with Heather du Plessis-Allen on Newstalk ZB. It was astonishing on the radio. On video, it was something else.

The biggest development is that he won’t be resigning the Botany electorate after all. That means no by-election, much to the chagrin of those who eagerly hunger for more precious morsels of politics. But the alternative that Jami-Lee Ross is proposing might be even more dramatic. And probably disturbing.

On a point of principle he is going to remain in parliament, as a conscientious critic of the National party, he said. He will continue to reveal more and more about them, saying “the rules have changed,” and that now private lives aren’t off limits. “It has been kept secret until now,” he revealed with a glimmer of glee in his eye.

“The way we play politics now, we lift the bedsheets and start getting into that detail. And there’s going to be a lot of people in a very similar position to me,” he said.

It’s not necessarily clear that is the case. He admitted a relationship with a fellow MP, and others whom he had relationships with. But the accusations being made against him aren’t really that he’s had sex. And if it was just that he was having sex, people would probably be largely indifferent. But the accusations made against him that are serious relate to bullying, harassment and manipulation. And also, he revealed, they came as a surprise to his wife, which will endear him to approximately nobody. He apologised.

There was another tape too – this one was the “natural justice” tape, in which it can now be confirmed that Simon Bridges did tell him it could end up being 15 women accusing him. Jami-Lee Ross handed it over to ZB, and it was played in the middle of the interview. But as Heather du Plessis-Allen put to him, it didn’t sound like Simon Bridges was threatening him. It sounded like he was warning him. And since the Newsroom story yesterday morning, more women have come forward.

That in itself raises questions about the course of action Simon Bridges chose to take. We don’t necessarily know that the women wanted Jami-Lee Ross outed – some said they only came forward when they heard him pontificating about his conduct at a press conference. But it does show that the course of action Simon Bridges chose was to encourage him to go on extended leave. It’s merciful, but also a bit murky.

There is also one way the by-election could still go ahead though, and by now, it’s probably being considered as a serious option by National. They could always invoke the newly passed waka-jumping bill, thus entirely proving Winston Peters right about the value of the law. It won’t necessarily be being used to stifle political dissent – though Ross claims he’s being pushed out for challenging the party hierarchy – it will be used to get rid of a guy who has thrown Molotov cocktails through the caucus room windows.

And those will keep coming. Ross says there’s a deep rot in the National party, hinting at stories about the various hits he’s been asked to carry out. “But you were the rot!” protested HDPA. He might have been following orders, and it’s probably worth listening to what he says. But it’s unclear why following orders absolves him from the responsibility of carrying them out.

National of course argued vehemently against the waka-jumping legislation, but at this stage of the story, Simon Bridges could easily just say fuck it and force him out. It was what he wanted all along after all, the chance to appear strong ordering the leak inquiry and doling out the consequences. Well, he’s now in a position where the best option is also politically ruthless, with all that entails in terms of his perception with the public. And honestly, it’s hard to see a groundswell of voters rising up to defend the career of some dude they’d barely heard of before this week. It’s a terrible precedent to set, with party leaders able to remove a renegade at will. But nobody who supports any of the parties of government can really complain about it.

The alternative too is a nightmare. Imagine turning up to Question Time and having to sit in the seat next to him. For National MPs now, getting photographed within a five metre radius of him will be toxic to their own fortunes, especially if he’s using parliamentary privilege to unload something new. And that could go on for two more years.

The chances of Jami-Lee Ross’s political career going beyond that is astonishingly unlikely. But the flailing of Jami-Lee Ross offers National the chance to salvage something out of this sorry mess, and take the focus off some of the other uncomfortable questions that have arisen. They’d be fools not to take it.

Alex Braae is the author of The Bulletin – a daily wrap of New Zealand news and politics from across the media. It’s extremely good and fun to read. Sign up below: