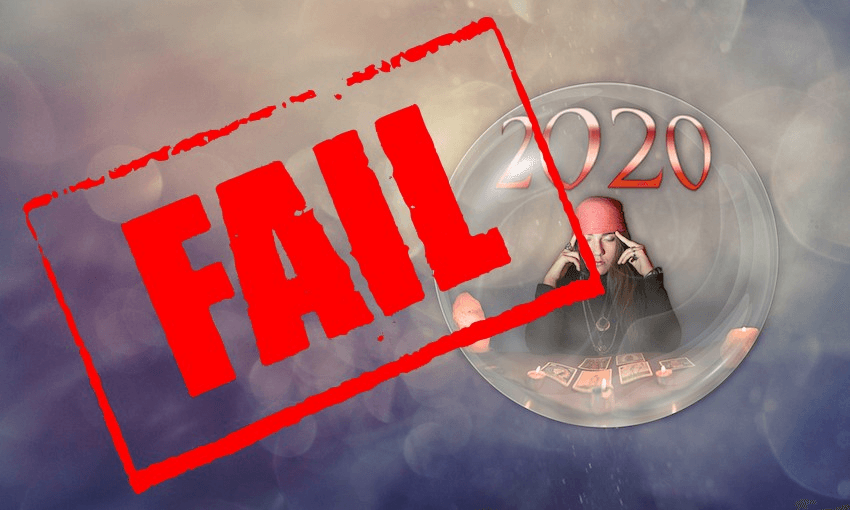 How wrong we were: Rating The Spinoff’s 2020 political predictions a year on

At the end of the relatively normal year 2019, The Spinoff asked a dozen pundits to give us their wildest prediction for the political year to come. Nobody comes out of this looking good, writes Alex Braae.

Punditry is challenging at the best of times. The random nature of events often leaves the most insightful of us guessing, and it’s fair to say that 2020 threw up a few surprises.

But that doesn’t excuse or explain just how bad our 2019 predictions now look in hindsight. Few even came remotely close, let alone getting any part of it right at all. For those who rely on The Spinoff to help them understand political events, this will be a difficult read.

To hold ourselves to account, we’ve gone through a dozen predictions from last year, and rated them on the scale of wrongness. Please accept this offering in the spirit of trying to restore our own credibility.

Verdict: Shockingly wrong. First up we’ve got this rubbish from an idiot who clearly knows nothing about politics. It was always totally obvious to every reasonable observer that Simon Bridges, and later National leaders too, would be more than happy to rule NZ First out early and often.

Judith Collins will defect from the National Party to lead Act and take that party to 3% at the next election. She won’t actually do this but if National wants an electorate partner with more than one vote this would be a plan. Collins would be formidable – Linda Clark

Verdict: Entertainingly wrong. It would have made for a much more fun election year, but there was only one party Judith Collins was ever going to lead to defeat, and that was National.

Verdict: Mostly wrong, but right in one important respect. Of course, the Māori Party has no power whatsoever to decide who becomes the PM in this parliament. However, Espiner did at least correctly pick that one way or another, the boss would be queen rather than a king.

Chlöe Swarbrick will blaze up in parliament. The cannabis referendum will win you see – Morgan Godfery

Verdict: Tragically wrong. This is why pundits should never get into the wish-fulfilment game. Both parts of this prediction would have been cool as hell, and as such, were never going to happen.

Verdict: Got more wrong with every passing day. What a cursed prediction for the former National leader, who started the year as a personally unpopular leader of a party in the frame to win, and ended it being most notable for borrowing someone’s yak to chase clout.

Verdict: Fairly correct, but just vibes wrong. I mean, Covid-19 as an “international economic woe” seems like a bit of a reach, and despite the border closure and wider global downturn, the economy is kinda sorta holding up.

Verdict: Sadly wrong. The key word here is “crowned” – while Gone By Lunchtime continues to be excellent, they continue to toil away in obscurity. Notably, the show failed to have a high enough profile to secure an interview with the Bad Boys of Brexit, who played a leading role in the election campaign.

Peter Thiel will get dragged into the election – Toby Manhire

Spring will come. Pinkerton will not return – Danyl Mclauchlan

Verdict: Pretentiously wrong. Typical Danyl, trying to throw an opera reference at a site that recaps Married at First Sight. In case you were wondering, yes I did have to Google it to discover it was opera.

Ardern will bring NZ First into the tent even if Labour and the Greens get over the line on their own. Māori-Labour caucus will cause problems for the leadership as they fail to get big wins on Māori issues. And Pania Newton to win the seat of Tāmaki Makaurau – Shane Te Pou

Verdict: Bold, but pretty much every part of this is wrong. At least Te Pou tried to throw some big calls out there, but let’s face it: NZ First is out of the tent, the Labour Māori caucus is larger than ever and now holds a huge share of cabinet, and Pania Newton didn’t even file papers to run in Tāmaki Makaurau.

Verdict: Bizarrely, this too turned out wrong. On paper, this sort of call looks like a sitter – of course elections are unpredictable. But for pretty much the entire campaign, it all got so predictable that the only real question was whether Labour would win by lots, or win by heaps.

Verdict: Good solid call, which was also totally wrong. Bless Trish Sherson for putting a clean number on her prediction, but it also opened her up to being flatly wrong. One tiny point in mitigation is that National did at least change leaders twice.

The final verdict: Keep an eye out for our predictions for 2021.