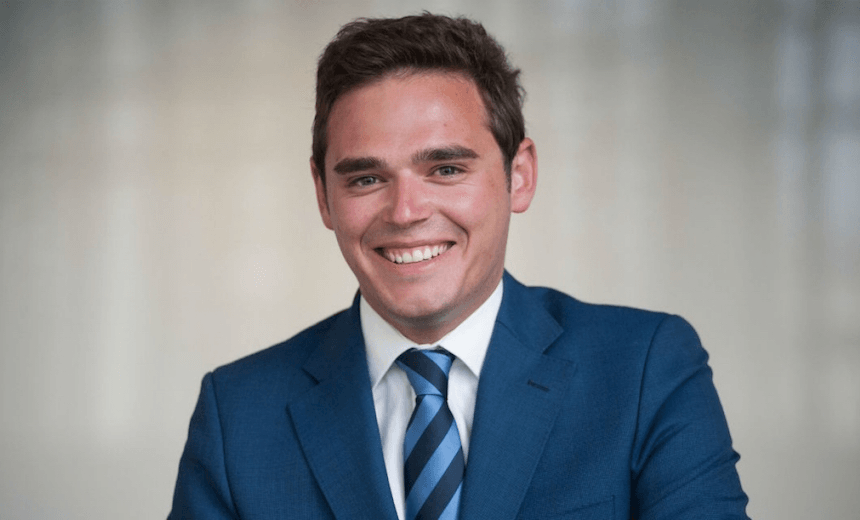 Who the hell is Todd Barclay?

Newsroom today broke the story of the payments and coverup that followed allegations of clandestine recording by Todd Barclay. But the MP for Clutha-Southland remains something of a mystery on the national stage. Peter Newport, a former RNZ reporter based in Queenstown, has interviewed him on multiple occasions and shares his impressions.

Over the past two years I’ve met and interviewed Todd Barclay quite a few times, and listened to the Queenstown gossip machine speculate on who he really is and what his end game is. The truth is that Todd is a bit of a ghost. You can be with him but it can feel like he’s not really there – or not fully there. Enigmatic would cover it.

Todd Barclay lives in both Gore and Queenstown. His Clutha-Southland constituency is vast, the biggest general electorate in New Zealand. He inherited it from now Prime Minister Bill English, who represented the area for 18 years. Barclay told me once that he preferred to live in Queenstown but politically had to be visible in Gore. He did buy a home in Queenstown recently, a new townhouse out in a fashionable development near Arrowtown. The nearby Millbrook golf resort is one of his favourite haunts, along with some of the rowdy roof top bars that sit above Rees Street in central Queenstown. He likes company.

An anonymous National Party member was quoted in March 2016 as saying that Todd was ignoring the farming heartland of Gore in favour of the “glamour and glitz” of Queenstown. It was reported that staff resources were being stepped up in Queenstown and reduced in Gore.

A defining moment had come earlier that same month of March 2016. Todd was being grilled by the Queenstown Branch of the National Party – his future was hanging in the balance. The story had just broken regarding his alleged secret recording of a sacked senior employee in his Gore electoral office.

It was 7.30 pm and the usually invisible people who decide on the fate of National Party MPs had been inside a private meeting room of a Queenstown accounting firm for over an hour. Barclay was in there too. I was hoping he’d talk when the meeting was over. It was not a selection meeting, but Todd Barclay was the focus.

The Queenstown Branch of the National Party was trying to figure out what to do about Todd.

When Barclay did emerge, he looked his usual calm self and agreed to talk to me. I was the only journalist there. The approach that had been decided in the closed-door meeting was that he would take the full mea culpa. The “I’ve made mistakes but have learnt my lesson” strategy.

The body language was there. Slightly reticent. “It’s been a steep learning curve”. Still confident. “My focus is on the future”.

“Have the police spoken to you?” I asked.

Only, we couldn’t move on. Other little things started to happen.

Barclay is always super-helpful, supportive and positive. He covers tens of thousands of kilometres all over the huge area he represents.  His office produces nice, very blue graphics which capture the number of schools visited, the number of school fairs opened, the number of pensioners he’s had tea with – and so on. He has mentioned to me occasionally growing up next door to the family of Bill English, how politics is in his blood. He’s clearly ambitious. He likes to have his photo taken and he enjoys video interviews.

He does not talk about his days working in the tobacco industry as a Philip Morris lobbyist. A Dominion Post editorial back in 2014 made the observation that a “drover’s dog could win Southland if it stood for National” and that National’s selection of the then 23 year old Todd Barclay was risky because Big Tobacco was “indefensible”.

Barclay once shared with me that he’d used the respected Wellington political consultants Saunders Unsworth to “advise” on his initial selection process as an MP. He spoke highly of their services. The impression he gives is that Bill English has been his guide, sponsor, family friend, neighbour and mentor throughout the entire political process.

Travelling around the region after that March 2016 interview I started to pick up more murmurings and rumblings. Someone in Invercargill hinted at a dark back story to the Gore office staff clear out, suggesting more is yet to come out and that the full damage to the people involved has not yet been documented.

Simon Flood now lives in Queenstown after a 25 year overseas career in London, Singapore and Hong Kong. He returned to New Zealand in 2015 after heading the Asia Pacific investment arm of AXA IM.

Simon Flood is well connected with the same Queenstown power brokers who helped get Jim Boult elected into the Mayor’s office in October last year, replacing Vanessa Van Uden who was seen as not being friendly enough to local business interests.

Some of the talk in Queenstown at that time was that Barclay was toast. Some people clearly wanted to get rid of him, seeing him as high risk following the debacle over the sacked staff member in Gore and the subsequent enraged resignations of senior Gore National Party committee members.

It became clear that the knives were out for Barclay, both in Gore and Queenstown. He’d been welcomed as the charming, intelligent whiz kid who could be a future prime minister. Now the same people were openly wondering if he was too young, too inexperienced, too brassy – too risky.

During the selection process late last year, the full, toxic nature of the Gore National Party politics was laid bare for everyone to see. Not a good look for anyone concerned.

A group of National Party members, dubbed the “evil six”, was lobbying against Barclay in Gore. Rumours were spread. Background deals were offered. What must have seemed to Barclay like a necessary change in office staff was producing hard fallout beyond his worst nightmares. The people he had taken on were the entire “old school” of the local Gore National Party. An image of incandescent farmers with pitch forks and blazing torches is hard to avoid.

Then, Barclay was re-selected.

A reason might be that for National to have a mid-term, pre-election change of MP, for one of the safest seats in the country, would be more than embarrassing. Maybe Bill English made it clear, in private, that he wanted Barclay to stay. Allegations emerged this afternoon on Newsroom insinuating “delegate stacking” and more. Regardless, he has friends in high places.

Barclay has remained magically calm throughout all of these dramas. He never lost his cool. Never seemed upset. Never angry, bitter or twisted. Always ready to share a beer, have a chat. Do a quick interview. Smile for the camera. I’m not sure if that is odd or to be admired.

Is being so calm, cool and collected in the middle of such massive trauma the sign of a good, natural, tough politician? Or the sign of someone who has a constitution that somehow can handle things that would keep most us awake, in a cold sweat, all night, all week?

But now the demons are back into play, again. Todd’s not returning calls. English has now admitted that he knew Todd had made secret recordings of his Gore staff. The situation has curdled, and the police may yet become involved again.

It seems that this cool, calm Southland man might now be left out in the cold.