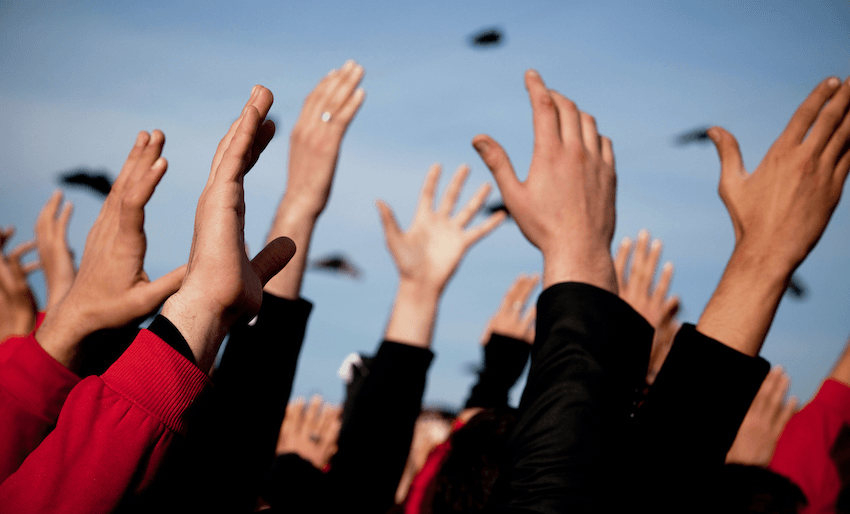 Politicians are already trying to divide us. They can’t be allowed to succeed

With less than 50 days until the election, attempts are well underway to pit us against each other in the name of winning power, writes Laura O’Connell Rapira.

No matter our differences, most of us want pretty similar things: to live well with good kai, good health, a warm whare, and time to spend with the people we love.

Most of us also want this for others.

For the past six years, I have had the joy and responsibility of coordinating thousands of people across the motu to combine their skills, networks, resources and time to bring a thriving and Tiriti-honouring Aotearoa into being. In my work, I have seen countless examples of people acting in solidarity across difference in the hope of building a better tomorrow.

I’ve met hundreds of Pākehā who volunteer their time and energy to help other Pākehā unlearn racism so that Indigenous people, Black folk and people of colour aren’t left to do the lion’s share of that work.

I’ve seen the Muslim community turn up for mana whenua at Ihumātao and tangata whenua do the same for our Muslim whānau in Christchurch.

Older Māori and Pasifika activists supported the young Black organisers of the recent Black Lives Matter rallies because we know many of our struggles and solutions are the same.

I’ve seen hundreds of straight people donate to save Pride when powerful institutions, corporations and police tried to divide the queer community by choosing uniforms over people.

I’ve met hundreds of middle and upper-class folk who advocate for liveable incomes for people in the working and welfare classes because they want to live in an equitable country.

In May and June, ActionStation surveyed over 4,000 New Zealanders for their perspectives on how Aotearoa should regenerate from Covid-19. 30% were low-wage workers or people on benefits. 31% were 44 and under, 29% were 45 – 59 and 40% were 60 and over. This isn’t representative but it is a good spread.

The average time spent on the survey was 30 minutes per person, adding up to an incredible 2,000 hours of collective effort and wisdom. We asked folks, ‘What do you hope Aotearoa could look like in five years time if we get this moment right?’. Here’s what we heard:

“People will work together to care for and nurture our whenua, moana, awa and taiao.”

“Everyone will have a warm home. Nobody will go hungry.”

“All of us will celebrate and honour Te Tiriti o Waitangi, te reo Māori and Mātauranga Māori.”

“People and government will think and act long-term.”

“Our team of five million will live in harmony with Mother Nature.”

“Loving healing support for all that need it.”

“A fair and restorative justice system.”

“Refugees and migrants are safe and experience meaningful community.”

“Lots of options for shared rides and public transport that’s free, comfortable and practical with room for groceries, children and folks of all sizes.”

“Safe bike paths everywhere for people who can and want to cycle.”

“Wealth redistribution with a keen focus on caring for our land and the people in it.”

In the UK a survey revealed that 74% of British people place greater importance on compassionate values than selfish ones – irrespective of their age, gender, region, or political persuasion. At the same time, 77% of respondents believe that their fellow citizens hold selfish values over compassionate ones.

This research hasn’t been conducted with people in Aotearoa, but I think the results would be the same. Most people are kind, generous, and loving. We just assume they aren’t.

This election, certain politicians will try to capitalise on this false assumption by trying to divide us in an effort to grab power. They will point the blame for our worries and uncertainty at one scapegoat or another, instead of supporting us to realise our collective aspirations.

We must not let them.

Because whatever our age, income or background, what the research shows is that most of us want pretty similar things: a good life for ourselves and our whānau.

With 47 days until voting opens, let’s be sure to remember that most people want a good life for everyone else too.