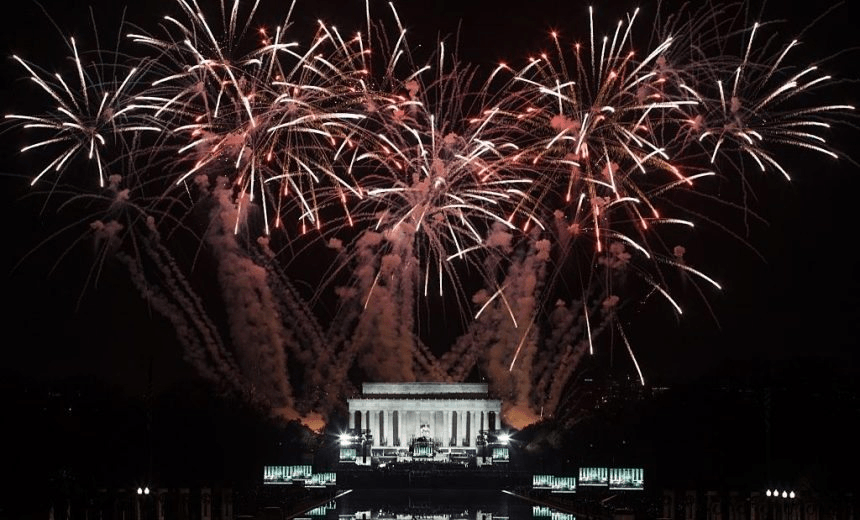 WASHINGTON, USA – January 19: Fire works explode above the Lincoln Memorial at the conclusion of the “Make America Great Again! Welcome Celebration” on the eve of the 58th U.S. Presidential Inauguration in Washington, USA on January 19, 2017. (Photo by Samuel Corum/Anadolu Agency/Getty Images)

Think worst gig in the world, but a bit worse than that: direct from Trump’s big inaugural concert

WASHINGTON, USA – January 19: Fire works explode above the Lincoln Memorial at the conclusion of the “Make America Great Again! Welcome Celebration” on the eve of the 58th U.S. Presidential Inauguration in Washington, USA on January 19, 2017. (Photo by Samuel Corum/Anadolu Agency/Getty Images)

Just how great was the incoming president’s Make American Great Again concert? Let’s cross to Ben Thomas in Washington DC, and pray for him.

The early reviews are in on Donald Trump’s Make America Great Again inaugural concert at the Lincoln Memorial and have not been kind. As someone who was there, let me tell you it was worse than that. The atmosphere was like a washed out Christmas in the Park, except it wasn’t raining. Instead it was crisp and clear in the capital, bracingly cold but sunny on the eve of the inauguration, a great day to attend the worst gig on earth.

“Black Thursday,” shrugged a barista to my friend David earlier in the day at his local suburban hipster café. The coffee house is where he would usually work in the morning, but was crammed to capacity with serious looking young people at laptops; inner-city workers who had been told to stay home today and tomorrow to avoid inauguration chaos.

The crowd in front of the Lincoln Memorial, under the watchful eye of old Abe in his giant throne, was sparse in contrast. They were there, the Trump supporters from TV: an old woman dressed as Uncle Sam in a wheelchair, scattered Trump-bears in bike leathers, one lady holding up a small “Women for Trump” sign to no-one in particular, bearded young men decked out head to toe in regalia. But these were every bit the outliers to their fellow attendees, too, who asked for pictures of even the most mildly triumphal merchandise. Two women pose for selfie with the man next to me whose Trump-face t-shirt bears the legend “Under New Management”.

What was missing was the ebullience, the sense of triumphalism, the energy. A big guy who looked like an obese Colonel Sanders in a US-flag Hawaiian shirt started a “Trump” chant and it died out in a few seconds. Conversation between strangers seemed perfunctory: He’s just the man we need as president, I’ve always said we need a businessman, he is exactly that man.

The conversations can’t go into too much detail. The Under New Management man says that what he likes best about Trump is that he will work 18 hour days for the country, that he has no interest in taking a holiday while there is work to be done. The real Trump, of course, has meanwhile said he will take the afternoon off following tomorrow’s inauguration, and also the weekend, but will definitely show up ready on Monday. There’s nothing unique to Trump fans in projecting values on candidates, but it probably explains why it’s easier to rally against a common enemy in a campaign than try and connect your version of a fantasy candidate to anyone else’s in the afterglow of victory.

Trump appeared on the big screen, and the crowd finally made some noise – startling the seagulls, which took off in fright from the reflective pool running the length of the concert area. Then it was time to start.

The acts were terrible and the audience, for the most part, seemed to realise this. Trump and his organisers knew it too, of course. Much virtual ink has been wasted on the parallels between Trump’s campaign and his occasional guest spots on World Wrestling Entertainment, but he is inarguably a master of the Cheap Pop. That’s an insider term for the quick and undeserved cheers a struggling wrestler can provoke by shouting out a local sports team or landmark to an otherwise impassive crowd. After ten or so seconds of the first act, DJ Ravidrums’ atonal percussive virtuosity – and essentially silence from the audience – the big screens cut from the drummer’s close up to a roll call of states’ names in alphabetical order, each eliciting whoops and applause from pockets of the mall.  We thought they rocked hard in Shelbyville, the screens suggest, but nobody rocks like Alabama through Wisconson.

Actor Jon Voigt takes the stage next, to discuss how “we all waited with breathless anticipation to see if God could reverse the lies and negativity” about Trump. Thankfully, as we all now know, God did just that. “I wish Clint Eastwood was here”, a woman behind me says.

A bunch of anti-Trump Californians who had travelled to take part in inauguration protests for the week held up small signs saying things like “ashamed”. A Trump supporter engaged them for a few minutes, explaining Trump supporters just wanted to be able to express themselves the same way Hillary supporters did, but as the group of women stood silently, except to dispute that they were Clinton supporters, he seemed to became self-conscious of his own thought process and disappeared back into the crowd, mumbling.

As a relic of the late 90s and early 2000s myself, I had spent weeks trying to mentally match Three Doors Down’s name with any of the earnest, droning MOR hits of the era. But as they began to play, their songs were as familiar again as when I heard them the fourth deadening time in a day on grinding high-rotate music TV during university holidays, before the internet. They did the one about Superman, and also probably inspired the soundtrack for Grey’s Anatomy. However, they started off with another number, the chorus of which ran “this is a call to the broken, stand up and take back your world”, sparking an amber alert in the capital for obvious metaphors and article lead-ins. One middle aged woman began swaying a single arm in the air; the 14 year old (or so) boy with her grabbed her wrist and pulled it down. Then he looked around and put on some Dirty Dog looking shades. Thus ended the most intensely engaged emotional reaction to Three Doors Down of the evening.

The country acts had better recognition, and by the time chart-topper Toby Keith emerged there were singalongs, foot stamping and even some air pointing. But it was pretty clear no-one was there for the music. It could just be that for Trump supporters, popular culture doesn’t take on political or intellectual importance – no-one in the crowd looked likely to write a 4000 word thinkpiece on the problematic aspects of the “frontmen of country” supergroup, they just cheered whenever someone sang the name “Texas” or, in particular, mentioned the military. A violin soloist introduced to applause by the guitar twanging country stars as a veteran of the armed forces; the Old Guard Pipe and Drum Band, a heritage military group playing in tri-corner hats and George Washington wigs, played Yankee Doodle. As they performed, Mr Under New Management bowed his head. “If our country was asked to do today what our country has been asked to do in the past, they wouldn’t be able to,” he said.