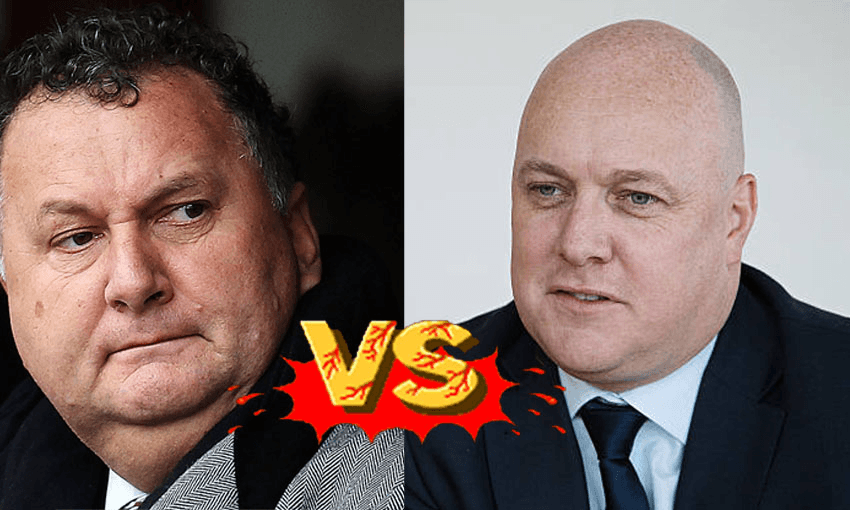 The Champion of the Regions versus the Corporate Taniwha. The CEO versus the Minister. Susie Ferguson versus a Straight Answer. Who will come out on top?

Early this month, national flight carrier Air New Zealand announced it would be suspending its service between Auckland and Paraparaumu. Mayor K Gurunathan, given less than 24 hours notice, called the decision appalling and bizarre, saying a private company would treat their stakeholders better than that.

“They’ve got this facade of the safety video, cuddling penguins in Antarctica, smiling Māoris at Waitangi, but do what you’re meant to be doing,” he said.

But with the government holding a 51% stake in the company, the private is public and the public is private.

So to borrow Jones’ metaphor, the gloves are on, the judges are ready, the fighters are ready, so who’s going to win the fight? We present a blow-by-blow coverage of Jones vs Luxon as heard on Morning Report – in separate interviews, mind you.

Chris Luxon: I think we’re incredibly proud of what we’ve been doing in the provinces over a number of years, particularly the last four or five years. That’s partly why we took issue with Shane’s comments today because while they’re his opinions they’re not actually consistent with the set of facts we see. We’ve actually delivered an extra 1.9 million extra seats into domestic New Zealand and we’ve got regional airfares down 8% in the last few years.

Shane Jones: The essence of corporate accountability includes shareholder activism. Shareholders, the majority of whom are the New Zealand crown, represent provincial New Zealand. I would say to the CEO to not poke your nose into the political boxing ring unless you’re going to resign today and join the ranks of the National party.

Luxon: We fly to 21 places across the country, 15 of the places we flew to in 2014 didn’t make any money. The bottom line is we’re working really hard with those regions to improve their services. The frustrating thing about Shane’s remarks yesterday is that he’s standing in Northland, well, Northland is one of the most deprived parts of New Zealand. We’ve spent a truckload of energy and investment trying to connect Northland to the rest of the world, promoting it overseas in terms of tourism.

Jones: This is a legitimate issue on behalf of those provincial areas that have been shortchanged. I’ve said all along that my focus is on the board, the chairman has written a letter in my view seeking to muzzle me as a democratically elected New Zealand parliamentarian, a champion of the provinces. The essence of his letter is that he has more concern for the nameless shareholders and Wall Street than he has for his fellow provincial citizens.

Luxon: The reality of this is that the terms of engagement are incredibly clear about how Air New Zealand works with respect to the crown, and that’s the point we were trying to make yesterday, which is look, it’s been well established under Labour governments or National governments, we work under the companies act not the SOE act, we actually only have one shareholding minister which is Grant Robertson, and we have a series of obligations from treasury to make sure that the board owns the strategy, owns the operational execution of this business, and that’s to make sure that it’s independent. That’s been a really good thing for Air New Zealand.

Jones: There has been an election. The election has led us to not only do something demonstrably different from the past, such as sitting up an independent climate commission, we are changing elements of how the Reserve Bank Act works – a completely independent body in the days of Don Brash – we’re wanting it to embrace elements that represent the thinking of this government.

Air New Zealand and their hermetically sealed board and the chairman whose time’s over, gosh, South Africa had the world cup when he got on the board. Well he’s not Richie McCaw and he will not receive any acquiescence from me to lie down just because he’s writing letters.

Guest Referee Susie Ferguson: Are you saying that Shane Jones and Winston Peters should butt out?

Luxon: There are two issues. This company is an independent company and needs to be an independent company and doing so has been really good for Air New Zealand in terms of we can innovate the way we want to, we can make commercial decisions in order to invest in the right way and buy craft that are really expensive. We can attract talent to the company as a result, and it’s been a very good success story any way you look at AIr New Zealand. This issue is about the regional position because if you just look at the facts, regional NZ is booming – we’ve been growing at 2.5x GDP across regional New Zealand.

Guest Referee Susie Ferguson: Are you calling on Christopher Luxon to resign?

Shane Jones: I’m saying don’t jump into the political boxing ring. You are an executive. Your job is to sit and coax dollars and cents onto the bottom line. Your job is not to be a publicity officer and try and thwart the legitimate role of a parliamentarian, a minister whose writ given by the prime minister as an associate transport minister is to highlight transport problems in regions and to be a champion for the provinces. But my real focus is on the board.

The board in my view are no longer serving a purpose that suits the entirety of New Zealand because they are shortchanging the provinces. I don’t care how much corporate jabber your radio station uncritically allows to pollute the airways, I’m not going to be thwarted on this issue.

Ministerial Shareholder Grant Robertson: Ultimately [Air New Zealand] make their own operational decisions, that has not changed, that’s simply the nature of the arrangement of the ownership. We’re only 51% owner, we don’t get to control every decision, that’s the reality.