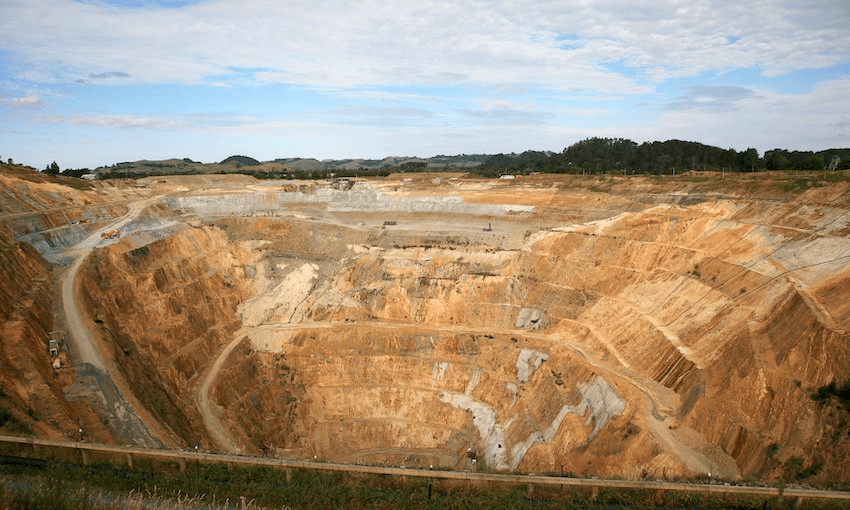 The chair of a watchdog group on why she’s determined to stop a new mine waste dump near Waihi on the Coromandel peninsula.

Just outside the town of Waihi there are two enormous artificial mountains of toxic waste from gold mining. Now the multinational mining company wants to buy more land and build another one, leaving an even greater legacy of risk.

The community group I belong to, Coromandel Watchdog of Hauraki, went to the High Court in Wellington this month to challenge ministers Parker and Robertson to judicial review over their decision to allow Oceana Gold to buy this land at Waihi for a new toxic mine waste dump.

We have taken this action because of the way the government has dealt with this issue. The first application from Oceana Gold to turn 178 hectares of farm land into a toxic dump was refused by the Eugenie Sage, the minister of land information, but then the Cabinet took her off the case. They handed it to Robertson and Parker who rubber stamped it. Sage had considered the loss of productive land, the increase in fossil fuels, risks of toxic dam failure and a range of social and economic issues. The second Crown decision only focused on its export potential and the jobs it would maintain.

The judicial review application and associated specific legal arguments around overseas investment will be decided by the High Court. But for us in Hauraki/ Coromandel this challenge is also about three huge issues.

The first is that Oceana Gold, a large multinational, wants to expand both within Waihi and into the coastal and conservation lands on the eastern side of the peninsula. This land includes beautiful forests, endangered species classified as taonga, and places people visit and revere.

Oceana wants to buy the food producing land at Waihi to build a huge waste dump for the toxic tailings which would come out of these new mines. The toxic waste in mine tailings includes mercury, arsenic, zinc, cadmium, lead and many other persistent heavy metals. The proposed expansion puts so much at risk for so little benefit, except to this foreign company. The tailings dams, or “impoundments” as the industry like to call them, are earth dams with some rock reinforcing and they are legendary globally for leaking or collapsing. The long list of dam failures in a range of countries over the last few decades makes interesting reading. The huge current dams at Waihi are apparently stable but there are no absolute guarantees.

The second huge issue is political. Our group has always challenged the benefits to this country of allowing foreign ownership to take over and contaminate land. We also wonder why the 2017 Speech from the Throne included a promise to stop new mining on DOC land and then do precisely nothing. The excuse is that NZ First is blocking progress. While that may be true, when will the leadership of Labour and the Greens call their bluff? Every month while we wait, the mining industry applies for permits to escalate mining on or under conservation forests.

To make matters worse, Cabinet sabotaged the Sage decision on the Waihi land purchase. It is extraordinary that a government which states “climate change is our nuclear moment” would undermine its own minister for standing up for the environment and the climate. The Greens should be making this a visible issue during election year but it is left to us, the local volunteers, to try to hold the government to account.

Coromandel Watchdog is also fighting these large scale mining activities because of legacy issues. Why would we support foreign companies to expand industries that are utterly dependent on fossil fuels? A truck load of waste for a few grams of gold is not a good bargain and there is no plan for sustainable jobs once the miners have walked away; Waihi will eventually be a town of holes and toxic waste dumps.

Internationally, a process called “urban mining” is creating jobs and stripping e-waste of the valuable minerals used in our cell phones and other products. We barely recycle 1 % of our e waste in this country but we could transition the workforce from bulldozers to e-waste and help meet our climate targets.

The real question right now, in the midst of the Covid crisis, is whether we going to do what we have always done or grab the opportunity for transformation. So far, apart from a lot of rhetoric and some investment in conservation jobs, the government has not shown imagination or courage. The climate crisis and the need for positive economic activity are inseparable. The boom and bust gold mining era should be a history lesson, not a toxic future.

Catherine Delahunty is chairperson of Coromandel Watchdog of Hauraki