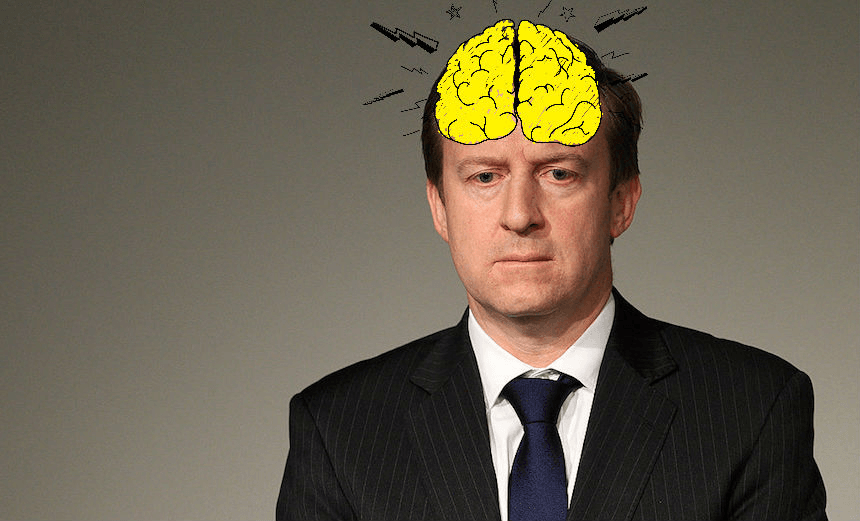 Revealed: what Jonathan Coleman was thinking this morning

An exclusive glimpse into the steel trap psyche of the former health minister and political colossus as he makes for the exit.

Thanks to the miracle of modern medicine, SpinoffAnalytica Labs has accessed the internal monologue direct from Jonathan Coleman’s brain. After sending the neuro-data to a Super Computer AI in Christchurch via email, we have a summary of his musings as he undertook a triumphant valedictory interview on Morning Report with Susie Ferguson.

The Honourable Doctor Jonathan Coleman, for it is I, wakes from his slumber. Such dreams! A veritable diorama of salvation: curing disease, delivering peace and puffing on a sweet Cuban.

But what is this in my electronic inbox? Probably Barack Obama getting up in my grill. Leave me be, Barry, you’re not the president any more, mate!

“Interview would be along lines of whether Mr Coleman had any knowledge of the state of Middlemore Hospital buildings during his time as Minister of Health,” reads the email. It’s the media again, they all want a piece of me. And who can blame them, really. I’d be the last person to blow my own trumpet – what after all are staff for? – but clearly there’s quite a legacy to explore, and clearly they’re thirsty for The Doctor.

The people need their Doctor.

Susie Ferguson: … We are now able to speak to National’s outgoing spokesperson for health, Jonathan Coleman. This after Labour is pointing the finger at National, saying the problem with the rot at Middlemore Hospital buildings should have been addressed by the previous government. Mr Coleman is with us now. Good morning.

SF: Were you told about the state of the Middlemore buildings?

JC: No. Not explicitly.

We better get to the overall achievements of the Coleman-Key government.

SF: Not explicitly? What does that mean?

JC: No, no. It means that I’m aware, I’ve been aware over time that they need injections of capital to continue to develop the site, but I was not notified that there was any sort of problem along these lines.

Typically disrespectful and tiresome lines from the disrespectful communists at Radio New Zealand. The people want to hear from their doctor!

SF: But we had the former chair of Counties-Manukau DHB Lee Mathias on the programme just a few minutes ago, saying it was common knowledge there was mould within the walls of Middlemore Hospital buildings when she headed up the board a few years ago and that most people in Wellington knew about it. How did you not?

JC: Well, obviously I hadn’t been told about it, but, you know –

Do you know who you’re talking to?

SF: That seems astonishing minister that if most people in Wellington at the ministry were aware of this, and the Counties-Manukau chair knows about it and the health minister doesn’t, isn’t that stretching incredulity to breaking point?

JC: No, it’s not actually. People don’t tell me, I don’t know. But actually Susie, we, I was informed –

SF: Why would people keep this from you, though?

Have I not undertaken consultation to the people of New Zealander tirelessly? Have I not made myself available for questioning at every opportunity, or at least once or twice a year.

JC: I don’t know, but I was informed this was not the topic of the interview so I’m a bit disappointed that once again Radio New Zealand ring up and say they want an interview on something which was simply my exit from politics and then make it about something else, but anyway, there you go.

Is the door to my hospitality suite not always open to those who would ask me anything, anything at all about my unmatched achievements as minister of the crown and the man who could easily have been prime minister if he really wanted?

SF: But isn’t this quite interesting –

Did I not dine with the people in a hospital somewhere in the South Island upon pasta bolognese, a sandwich, and pea and ham soup?

SF: Coming at this particular time that this should be such a problem –

I ate pea and ham soup for fuck’s sake.

SF: That seems to be pretty significant at Middlemore, and you were the health minister for some time before that –

Look there are some people there now.

SF: You’re saying you had absolutely no knowledge of this?

JC: No. Haven’t been told about it. Anyway, have a great day –

I don’t actually want Susie to have a great day.

JC: I’m walking with my kids, and I’m leaving politics, so thanks very much Susie, bye-bye.

I will walk with them still. And as I end this call and step out of the fiery coliseum of New Zealand politics I can hear the people of New Zealand, my children, cheer. They are happy children, and they do cheer for they were sick and the good doctor hath healed them.