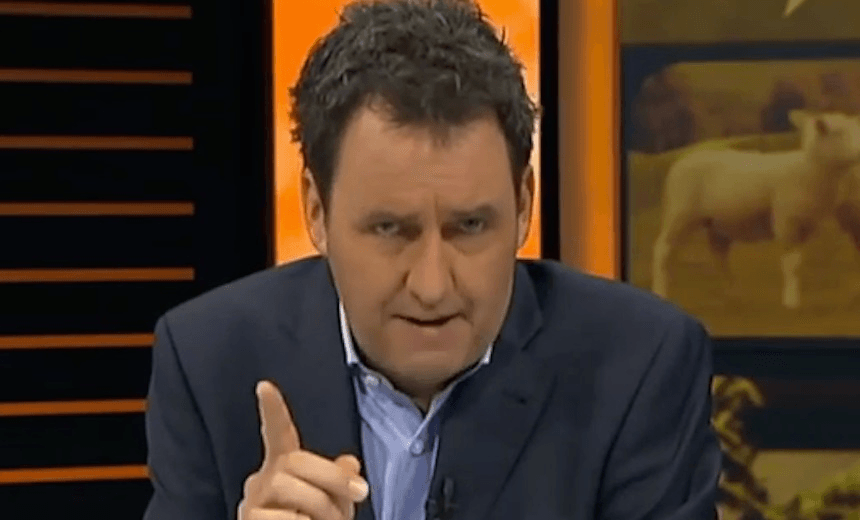 Summer Reissue: One Mum Explains Why Mike Hosking is the Seven O’Clock King

Greg Bruce interviews his Mum about her penchant for Seven Sharp‘s Mike Hosking over John Campbell.

Mum came over last week to babysit my daughter and on arrival told me some story about something Mike Hosking had been talking about and, because this is a fairly common occurrence, I thought, ‘Why is my fundamentally decent mum so interested in a man comprised of so many morally repugnant thoughts?’”

So, a few days later, I called her up to say I wanted to interview her about that. It wasn’t an easy conversation because I don’t get any joy out of telling my mum she’s wrong, but important conversations are rarely easy.

I reminded her about the Hosking story she had told me the week before. “I can’t remember what it was about,” I told her. “Can you?” She could. It was about one of his children giving a pre-Mother’s Day present to his wife. The present was an easter egg and the child had left it under her pillow, where it melted.

I’m sure that the original story benefited at least somewhat from Hosking’s comic timing and general enunciation, but I couldn’t help but wonder why mum was telling me about the life of someone I am generally appalled by.

I said: “That was just a thinly veiled way of reminding me that Mother’s Day is coming up.”

I thought mum knew my views on Hosking based on things like his horrendous attack on the victim of Ponytail gate, his shameful bullying of the poor, his claim that a newspaper column takes about half an hour to write; but apparently not, because when I said to her that I find his outlook on life repulsive, her reaction was a surprised “Oh.”

I explained what I was trying to do: find out why she likes Hosking when she strikes me as a fundamentally decent person. I made a fairly long speech to that effect, and then left her space to respond, as Hosking might have, at his best. There was a long pause, then she said: “And?”

“It started when he used to be on breakfast years ago,” she said “and he was always in suits and everything was perfect.”

I wasn’t sure what was the ‘it’ in the phrase ‘it started’– his career, her affection for him, his love for things that are perfect.

His life was very private, she said. He got custody of his kids and kept them out of the media, took some photographer to court to keep pictures out of media or something. It was the first time she had seem someone in the media do that to protect his children. She thought, “Well, he can’t be bad.”

I explained to her how disagreeable I found his idea that if you can’t afford kids, you shouldn’t have them. It’s an empathy issue, I said. He lacks empathy. How can you like somebody so lacking in empathy?

“I never stopped and thought about the reason I liked him,” she said. “I think people my age do like him. You’re the first person I’ve heard say that about him.”

“There are times he’s been on Seven Sharp,” she went on, “I’ve thought: ‘He’s really got feelings for these people.’”

“There have been several stories in the last few weeks when they’ve done whatever it was, that he really felt it.”

“What about Gloriavale?” I asked. John Campbell is exposing all this horrendous stuff that went on there and then Seven Sharp arrives a week later for a sleepover.

“I’m sorry, I didn’t see that at all,” she said. “I’ve never watched John Campbell. He appeals to you guys and I’ve just never liked him.”

I can accept that my mum, with her old fashioned views and fondness for the royal family might appreciate the tousled charms of Hosking the funnyman, but how can she not like John Campbell, who cries so easily, does so much for children and – if it must come to this – has kept his children out of the spotlight much more effectively than Hosking.

“Why are they talking about axing him then?”

“Because he’s no good. His ratings are too low.”

It hurt to hear her talk like this because Campbell is so clearly a good man doing good work. I launched into an impassioned defence of his advocacy journalism and the way he has touched and changed the lives of so many, especially children, which is my mother’s weak spot. How could she dislike somebody who has done so much for children?

“I haven’t thought about it,” she said.

“What turned you off him?” I asked.

“I’m not sure,” she said. “Maybe just how he interviewed people. You know, when you meet people you take a like or a dislike to them?”

She then switched tone so suddenly that it shocked me, both because I knew how long she had held these views about John Campbell and because I know how seldom people change their minds just because their children think they should.

I asked if, in the wake of that realisation, she was prepared to watch Campbell Live now.

“I don’t know,” she said. “I’d have to think about it. I sometimes switch over. If I’d known he had all these things about Gloriavale, I would have switched. I shouldn’t have judged him like that.”

This felt like such progress, like a small but valuable strike at the heart of the Hosking audience. Unfortunately as the conversation went on, she drifted inexorably back into familiar statements of support for Hosking.

“A few times I’ve listened to him in the morning or if I’m travelling. Some of the interviews he does with people from overseas and that, I think are pretty good. The questions he asks and what he gets out of people, I think he’s pretty good.”

“Is he as good as John Campbell?” I asked.

“If you’re going to put it that way, Hosking probably doesn’t do as much investigative stuff as John Campbell does, which is the point you’ve been trying to make.”

That was certainly a point I had been trying to make, but it was a sideline to my bigger question of how a reasonable person can endorse the work of a man so clearly in thrall to his own opinions that he is unable to stop touching himself on live television.

“At the end of the day, in the evenings, I just want to watch something that’s going to entertain me,” she said. “I get more out of the light-heartedness of Seven Sharp.”

“Don’t you think it would be sad if John Campbell wasn’t around to help people anymore?” I asked.

“Maybe they need to put him on in the morning, when people are ready for that kind of thing,” Mum said.