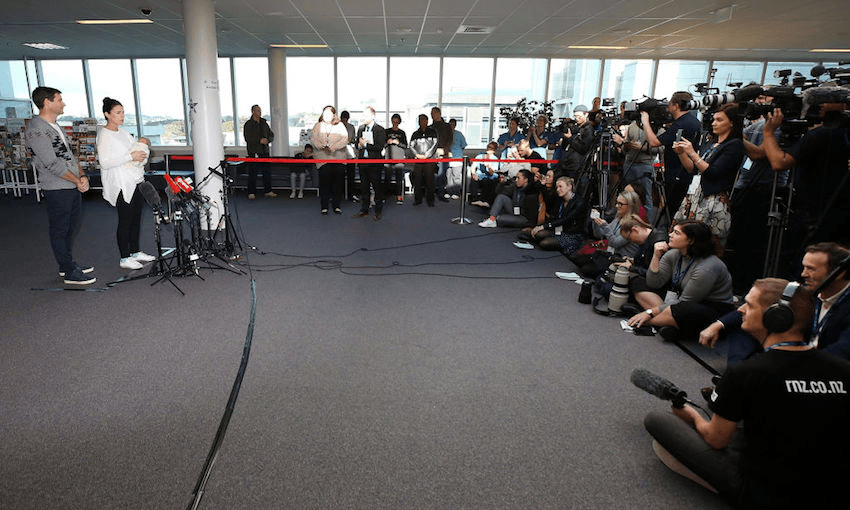 Waiting for Neve Te Aroha: inside the media room at Auckland Hospital

How does one report on something that’s happening behind closed doors? New Zealand media did their best last week as Jacinda Ardern gave birth, but was it enough? Or too much?

We all waited in the rain for the baby to arrive. Not to arrive in the world – Neve Te Aroha Ardern Gayford was born three days earlier, though it was raining then too – but to arrive in a car with her parents. At an intersection in Auckland Domain, a dozen reporters and their camera crews set up on the corner to film and photograph the prime minister, partner Clarke Gayford, and baby Neve as they drove home from the hospital.

It was a little bit ridiculous and yet it felt necessary.

As acting deputy political editor (read: staff writer who has a mild interest in politics) I was sent to Auckland Hospital on Thursday morning to be The Spinoff’s baby correspondent. Of the employees at The Spinoff, I have had some of the most recent experience of being a baby myself and so was uniquely qualified for the job. Having nothing important to do at the office all day also influenced the decision.

When I arrived at the hospital, cameras had already been set up along Grafton Road and I spotted two reporters doing live crosses. Those same cameras would soon become the target of ire from all corners of the internet as people chastised media for not leaving Ardern alone.

The prime minister giving birth while in office is news. That’s not even a point of contention. Yes, women give birth every day, but only one world leader has given birth while in office in history. It’s news. And as with most news, it’s more interesting to have a reporter share details from an event, no matter how boring (eg the entrance to a hospital) than to have them in studio. There was an assumption that the cameras set up across the road from the hospital were waiting for Ardern to emerge, as if she might accidentally walk out the front entrance while in labour and be captured on camera in a viral gotcha moment. In reality, they were set up there in the same way reporters are filmed outside a big concert. There’s something happening inside that can’t be shown but here’s the venue anyway.

Meanwhile, inside I had set up a station in the corner of the media room expecting the rest of the room to fill up. It did not, and I looked like I’d put myself in time out as the only reporter there without a camera crew. All morning I sat in the corner and did nothing because nothing happened. The only remotely interesting thing was the retro coffee machine that had been set up in the corridor. In my attempts to shoot a ‘quirky’ refreshment sequence on my phone, I made three cups of coffee. I drank those three cups and was swiftly upbraided by a security guard for filming in a private area (I was given permission by the comms department beforehand).

Then Judith Collins expressed her disgust at a fictional event that hadn’t taken place. I was an enemy of the people and all I got out of it was extremely shaky hands because I don’t even drink coffee.

And the answer is because the media did leave the prime minister alone. They left her so alone that they became rabidly invested in the number of babies born at Auckland Hospital, and delighted at the press releases stating what she had eaten for breakfast, lunch, and dinner. Why did they report these pointless, inconsequential details for three whole days? Because when half the country wants to know how their friendly neighbourhood leader is doing after giving birth, it’s news. And it’s still news even when all there is to share is a report on who gave the biggest bunch of flowers.

Childbirth is boring to everyone but those in the room. This child is the closest New Zealand will get to a royal baby, but unlike the Windsors, Ardern and Gayford don’t have centuries of family drama to comb through while everyone waits for a baby to pop out. Instead, we got a sad video of the supposed route taken to the hospital in the morning; a moving ode to the winter solstice; a comprehensive history of Auckland hospital; and a weird tweet from Kim Dotcom. Rarely is such a history-making event so boring, and the media didn’t know what to do.

I spent eight hours in and around the hospital on Thursday giving irrelevant and sarcastic updates to The Spinoff’s live blog. In doing so, I failed to read any of the other live blogs that were circulating. Having since caught up, I can safely say we did not overshoot in our attempts to parody the desperate search for content in live blogging an event while not actually being at the event. Never has the number of babies born in a day been of such interest (for the record there were 24 babies born at Auckland Hospital on Thursday 21 June, including Neve).

New Zealand could’ve gotten more interesting coverage of the prime minister’s time in hospital if media acted how a lot of people thought they acted. There could’ve been covert missions into the wards, ambushing of doctors and nurses as they finished their shifts in the maternity ward, camping out at relatives’ homes looking for comment from the inside circle. New Zealand media make for terrible paparazzi.

Instead, when Ardern and Gayford eventually held a press conference at the hospital on Sunday morning, media were so aware of a baby’s presence that the room was eerily silent while the new family posed for photos. Some hospital staff and patients joined the press to watch as Ardern answered pre-organised questions. Like the coverage from the previous 72 hours, it was all rather nice. Nice and boring. The perfect history-making media event for this country.

We all waited in the rain for the baby to arrive. One photographer joked that he’d jump on the hood of the car for the perfect shot. Of course no one did. Clarke drove down the road, reached the intersection lined with cameras and turned right. No one knew for sure which way they’d turn and chose the safest option. I took a guess and walked up the road fifty metres. I only had my phone and figured I would either get a new, exclusive angle, or miss them entirely. Either way, it didn’t really matter.

I guessed right, then forgot I was supposed to be recording and just waved at them as they passed. They cheerfully waved back and were gone. It would’ve been a great photo had I taken one but sometimes a wave is enough.