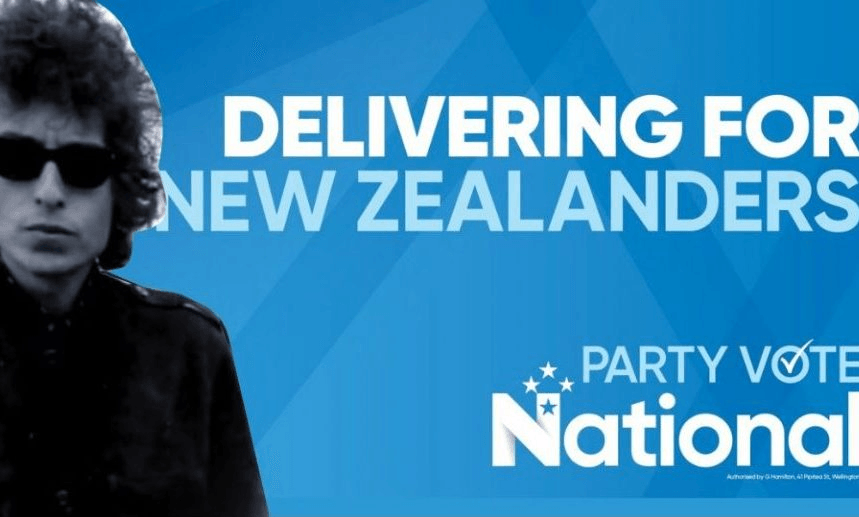 Wait, that National Party campaign tune does sound a lot like this Bob Dylan song

Three years ago, National was landed in hot water over the music used in a campaign ad. Surely it wouldn’t risk any kind of repeat? Surely. Or would it? Hayden Donnell jumps down the rabbit hole.

The last time National released a campaign ad, it ended up in court. Lawyers for Eminem accused the party of ripping off the rapper’s song ‘Lose Yourself’ in the ad’s backing track. Lawyers for National argued the song, which was called ‘Eminem-Esque’, wasn’t a rip-off of Eminem. A courtroom of unsmiling, motionless legal professionals listened to the recordings back-to-back.

The judge reserved her decision.

Overall the case was a humiliating ordeal for New Zealand, National, music, the justice system, and the concept of justice itself. It gave John Oliver another chance to take a steaming dump on our accent and our beautiful birds. It gave The Guardian a chance to use this amazing headline:

Now another general election has arrived, and with it another National campaign ad.

You’d expect the party to have a few key aims this time: some combination of “Please god make Bill English look relatable”, “Show a road”, and, “Don’t mention Jacinda”. But the thing you’d expect to be a priority above all else would be: “let’s avoid anything which might get us in court for alleged copyright infringement”.

At first listen, the song accompanying ‘Let’s Get Together’, which has just started airing on TV, seems like a slightly-too-depressingly-downtempo folk-country ditty, or if you write for The Daily Blog, a terrifying Orwellian nightmare.

But listen closer, and you’ll see the ad is actually a subliminal message for National-voting over-sixties. It’s designed to take them back to when they were young, swimming in free love, free education, free healthcare, and almost-free houses, still years away from systematically ruining all those things for their children. And it achieves that by sounding quite a lot like ’70s classic ‘You Ain’t Going Nowhere’, composed by Bob Dylan and popularised by The Byrds.

Right now you’re probably screaming “this is impossible”, and wrenching at your hair and clothes. That’s what I did when I first read the tip-off from a Spinoff reader that sparked this story. But calm down. Look at the evidence.

The chord progressions in the songs are almost the same, though ‘Let’s Get Together’ is in a different key and features a relative minor chord, against Dylan’s minor second. Their melodies also sync up, with ‘Let’s Get Together’ playing it a little more straight than Dylan’s characteristically improvisational verses. But listen to the chorus. ‘You Ain’t Going Nowhere’’s distinctive coos are strikingly similar to those in National’s song.

To test just how alike those choruses are, I spliced them together and sang the new song, Let’s Get Nowhere into a terrible recording program. The results will shock you to your core.

Will my awful musical Frankenstein end up being played in a court of its own? Will National be freshly accused of being a pitiless song pirate pillaging the sea of sound? Will Steven Joyce call it “pretty legal”? If John Key is Marshall Mathers does it follow that Bill English is therefore Bob Dylan?

Does the National Party acknowledge the songs are alike? “No, we don’t,” says a spokesperson. “It’s a unique song, an original composition by a very well respected New Zealand composer, Murray Grindlay. We’re very proud of it.”

All I know is I’m sending prayers that Don Henley will be spared.