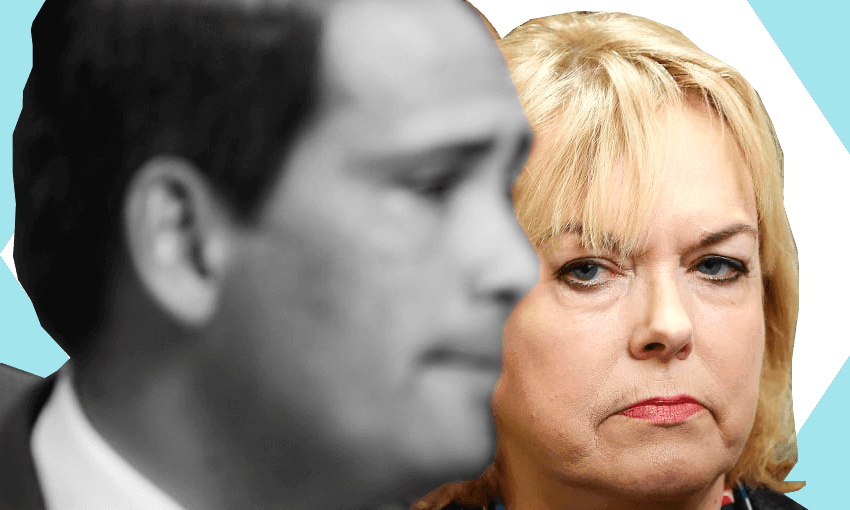 Amid the Collins vs Bridges animosity, one thing is clear

A demotion and an allegation of ‘serious misconduct’ are just the latest episode in a catalogue of ignominy. The party may need a new face to save it, writes Toby Manhire.

National leaders – or, rather, leaders-in-waiting – have lately taken to writing books. If a dispassionate book were to be written about the senior ranks of the party across the last few years, however, it would be dismissed as too sordid for fiction. The litany of muck in accusations made by and about Jami-Lee Ross. A veteran MP resigning amid allegations of “altercations” with staff. One novice MP resigning after sending unsolicited sexual material to a 19-year-old, another after secretly recording staff. A candidate accused of posing as his ex-partner as he shared intimate images of her. The ex-president leaking private patient details to a sitting MP. And that’s just off the top of my head.

Last night, in a media release issued just before 9.30pm, came more evidence of a party in an inferno. Leader Judith Collins announced that she had received a complaint from a fellow caucus member about a former leader of the party, Simon Bridges, who had accordingly been “demoted and relieved of his portfolio responsibilities”.

“The decision follows an allegation of serious misconduct relating to Simon Bridges’ interaction with a caucus colleague. The case relates to comments made by Mr Bridges to a female caucus colleague at a function a number of years ago. Having been made aware of the seriousness of the complaint for the first time and the ongoing distress this has caused the complainant, I was left with no option but to immediately demote Simon Bridges and relieve him of his portfolio responsibilities,” said Collins.

“This decision has not been made lightly. However, the seriousness of the situation demands a swift and decisive response. Under my leadership, the National Party will not tolerate harassment and intimidation of any person.”

Within an hour, the major news outlets were reporting that the incident happened almost five years ago, in early 2017, and that the complainant is Jacqui Dean. It took place at a caucus event, before Simon Bridges was leader, according to the reports, and related to a lewd and offensive comment, which prompted a complaint to then leader Bill English. Dean wakes this morning finding herself at the centre of a fresh storm that was not of her making, reliving what was clearly for her a dreadful experience.

Bridges is said to have privately apologised after the complaint was levelled at the time, and presumably now will do so again, in public. But everyone from National MPs to voters at large will find it hard to imagine that Collins’ motives are pure, that it is mere coincidence that it happened in a week when Bridges was grinning upon being asked repeatedly if he was planning a leadership challenge, gulping like a stuck record “that’s not my intention” in a Newshub track that confirmed more people (and more National voters) want him as leader.

If Collins lives up to the caricature, she will care not for the carnage she causes her party in clinging to power. Manifestly she is on the way out; the question is only when and how and at what cost. Whether or not this ends Bridges’ aspirations for a second turn as leader is harder to say, not least because the particular tenor of the offending comments from 2017 is for now unknown.

Some of his supporters were privately suggesting last night that the remark was crude but goofy, intended outlandishly and not directed at Dean. At the same time, National MPs current and former are aghast not just at the polling data generally, and not just at Collins’ own preferred PM support, but at the sentiment among women voters, where the numbers tunnel deep into the ground. The next leader will be tasked with turning that around. For Bridges, being accused of “misconduct” over “comments made to a female caucus colleague” cannot be easily shaken off.

It is not unthinkable that both Collins and Bridges emerge losers, with neither considered fit to lead National into the next election. So then who? Christopher Luxon, aka the “good looking bald man” and John Key protégé, lacks parliamentary experience and is reported to be biding his time till 2023 at least. Could this latest mess prompt him to consider an acceleration, swept in as reluctant saviour? Look to Nicola Willis, the Wellington MP from the liberal end of the party, a former Key staffer who might just give Jacinda Ardern a run for her money? How might Shane Reti shine if free to speak his mind?

It may be boring and obvious to say it, but it is also true: the very last thing we need is an opposition that is self-absorbed, self-obsessed, bursting with palace intrigue, eating itself. Like the rest of the world, we remain in a public health crisis that reaches into every corner of our lives. The government is taking monumental decisions almost every day. We need – we deserve – a functioning, unflagging, focused opposition. The references to the National Party in the news today should be all about opposition MPs’ critical, principled objections to indefensibly hurried and insufficiently scrutinised legislation. You know they won’t be.

The one thing that is sure in the latest chapter in the miserable, tawdry recent history of the National Party is that something is rotten. Whether a new face at the top can change that I don’t know. But it would be a start.