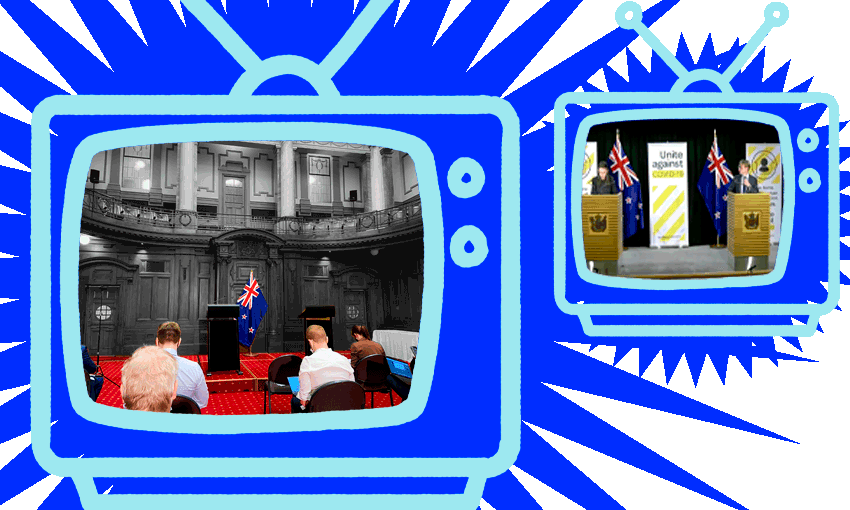 Welcome to the new 1pm presser

Who will win the political TV ratings at 1pm?

Judith Collins is gone. So says Tova O’Brien, wearing a great yellow coat while tweeting the news. Reporters have been standing by all day for news of a potential coup within the National Party, drawing attention away from the government for the first time in months. For the past 15 hours, no one has given a thought to the government with the opposition party in full breakdown mode. The rumours say Christopher Luxon is likely to be voted leader by the party caucus and all will be revealed in an already-two-hours-late press conference.

Who would’ve thought we’d all be waiting around at midday for a press conference hosted by… a National MP.

For nearly two years the government has dominated the ratings game, with tens of thousands of viewers tuning in to dozens of 1pm and 4pm press conferences. The prime minister, deputy prime minister, Covid-19 response minister and director general of health have had starring roles, becoming celebrities in Aotearoa, to an almost worrying degree. Primetime television? More like prime minister time television (sorry, please, don’t leave).

But now, at long last, some competition. Against all odds, the National Party has introduced a challenger to New Zealand’s most popular programme. “New Zealand’s Next Leader of the Opposition” premiered late last night at the unconventional time of 9.23pm and has been running an omnibus ever since. It’s drama, it’s unpredictable, it’s as good as Succession in making you think is it just me or are all the characters in this show horrible?

Having announced a 10am press conference, leader of the opposition (as at 9am this morning) Judith Collins looked to corner the post-breakfast TV market, but more than two hours later, there’s still no sign of an episode, and news stations across the motu are standing by.

Who will emerge through the proverbial smoke machine as the new star of the opposition party? Will it be Christopher Luxon, or Mark Mitchell, or, dare I dream, Maureen Pugh? All will be revealed at an unknown time today.

Whoever it is, the nation will be tuning in. And if they time it right, National may, for the first time, replace the government in the 1pm national presser slot. Or perhaps there’ll be a crossover episode and Dr Ashely Bloomfield will report the latest case numbers, vaccination numbers, and introduce the new leader of the opposition.

There’s no such thing as bad publicity, apparently. National haven’t had this much publicity in months. Whether by coincidence or through carefully planned mayhem, it’s likely that the news will be confirmed at or around 1pm. Today is simply a press statement day from the government, but tomorrow the 1pm presser is back. If the National saga is still going, which show will you be watching?