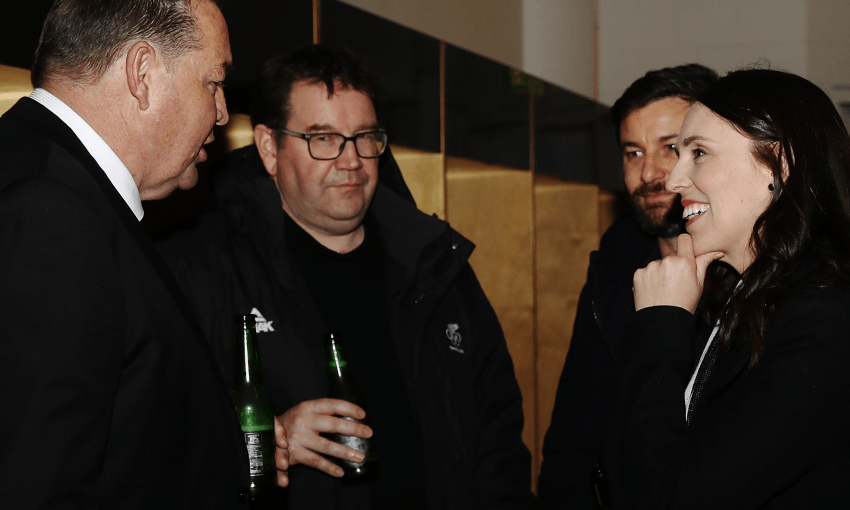 PM Jacinda Ardern smiling politely, possibly at the idea that the government could put taxpayer money behind the All Blacks (Getty Images)

Taxpayer cash for the All Blacks would be self-defeating stupidity

PM Jacinda Ardern smiling politely, possibly at the idea that the government could put taxpayer money behind the All Blacks (Getty Images)

All Blacks coach Steve Hansen has suggested the government should help the All Blacks retain key players. Here’s why that would be such a terrible idea.

Now, in fairness, he may have been joking – it’s never particularly easy to tell with Steve Hansen. After meeting PM Jacinda Ardern and minister of finance and sport Grant Robertson, he hit them up for some cash. As Newshub reports, he asked them to “find some money to help us compete against the likes of England and France so we can keep our players”.

The government has so far not commented on the request, and that’s probably because they realise it would be an astonishingly poor use of money, but it’s politically unpalatable to say so. “They should be our biggest sponsors because we’re their biggest brand,” said Hansen. Let’s leave quibbles about Fonterra and Air NZ and how exactly “biggest” is defined aside, and just focus on the suggestion.

The All Blacks have a couple of sponsors already. Insurance giant AIG are in for what is understood to be around $80 million over six years. Adidas, one of the biggest sportswear brands in the world, reportedly puts up about $10 million a year. There are global partners, regional partners, tournament partners, Voltaren, Rexona, Bluebird chips, Whittakers chocolate, the roster of sponsors is already pretty strong. Sure, some of those are New Zealand based companies, but just like Emirates Team New Zealand, the main sponsors are global in outlook.

The ETNZ argument is an interesting one, because some have pointed to the fact that the government has stumped up significant sums of money so that the America’s Cup can be hosted in New Zealand. There is a tenuous and heavily disputed case to be made that money for an event like that creates more economic activity than would have otherwise happened, and once a decade events like Lions tours do bring an economic boost – purely through big spending Brits turning up. But if the rationale is to help the All Blacks keep their best players, there’s no economic difference between beating Australia by three points or 30.

The New Zealand government does, of course, already spend money on elite sport. Through High Performance NZ, athletes likely to win medals at Olympic or Commonwealth Games are given a bit of money to basically cover the costs of training full time. But Lisa Carrington, for example, isn’t getting rich from the government supporting her paddling career, even though she is personally responsible for 20% of all Olympic Golds picked up by New Zealand at the last two events.

There’s already a reasonable argument that even that money is poorly targeted. An influential study from Britain found that funding elite levels gives you elite outcomes, but doesn’t really do anything to raise participation rates across the country as a whole. It’s like a real world test of whether the trickle-down theory of economics works, and incredibly, it doesn’t.

As a general principle, government spending should be about finding what’s going to give the most bang for buck. The nebulous idea that top role models make kids want to play sport is a poor substitute to the literally incalculable benefits of giving more kids the opportunity to actually play more sport. Just having kids running around and being active generally helps prevent the health problems caused by increasingly sedentary lifestyles setting in. And if some of them turn out to be really good at a particular sport, that’s great. But sports already have enough issues making pathways between participation and elite levels smooth – just look at the comments made by Steven Adams about how he couldn’t afford to be part of youth rep teams when he was coming up.

But of course, this isn’t just any sport. This is rugby! The national game! This is the sport with senior figures putting their hands out all year, asking for $500 million in public money for a new rugby stadium in Christchurch. This is, of course, already a city with a stadium, it’s just that people aren’t going to the rugby in the same numbers that they used to. But ignore what that says about the place of rugby in 2018, and just focus on the mind-boggling request in the first place for $500 million.

If there’s one final thing to consider, it’s telling that Steve Hansen referred to the All Blacks as New Zealand’s biggest brand. Not Kieran Read. Not Sonny Bill Williams. Not even repeat world player of the year Beauden Barrett. If it’s the All Blacks as an institution that are so all-important, then what does it matter if certain players get retained or not? Surely this brand, so heavily backed by corporate partners already, is strong enough to survive a few defections.