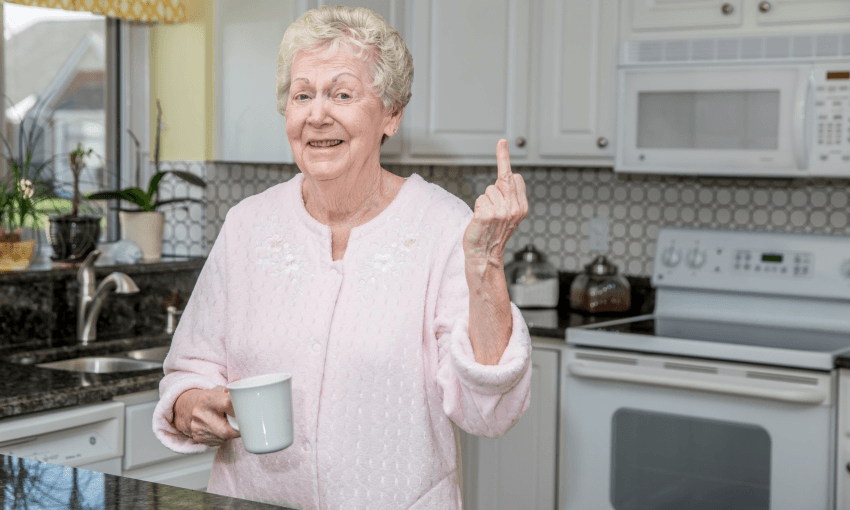 Pictured: A stock photo model depicting someone unhappy about possibly having to pay a capital gains tax (Getty Images)

CGT hissing proves how entrenched our unfair tax system is

Pictured: A stock photo model depicting someone unhappy about possibly having to pay a capital gains tax (Getty Images)
Literally decades worth of untaxed capital gains have created a political nightmare for the government. Is there any way they can navigate a capital gains tax through it, asks Danyl Mclauchlan?

Part of the problem is that this government is trying to unshit the bed. We’ve had a deeply unfair tax system with its grossly distorting impacts on our economy and our society for so many generations it feels normal.

Simon Bridges was right when he described tax free capital gains as ‘the Kiwi way of life’. But I think he said something much darker about his country and his politics than he intended: that it is now ingrained in our culture that those who have the most in our society pay so much less in tax as a proportion of their wealth than those who have the least, and that this is an injustice he will fight to entrench.

This is a great development for Bridges: he’s talking about a new tax and not his leadership. It’s also a very useful experiment for the wider National Party. If Bridges can’t make a decent fist of this and win some votes back . . . [throat slitting gesture]. And he could easily win: the status quo is so hardcoded into the values and life choices of so many New Zealanders it’s going to be agonisingly difficult to change.

Part of the problem is the politics. Sir Michael Cullen’s working group report estimates that the top 20% of households will pay most of the capital gains tax. But 20% of households is, like, a lot of people. And they’re mostly high voting-probability dual income households, which probably nudges Labour closer to an election scenario in which they’d be campaigning to impose a new tax on 30% of the electorate. Not even Jacinda can pull that off.

Part of the problem – a big part, I think – is the messaging. Labour have campaigned on capital gains for the last two elections, ditching it at the last moment during the 2017 campaign, and I suspect they’ve talked about it for so long they feel they don’t really need to explain it any more. But I doubt the wider public has any comprehension whatsoever of what this new tax is supposed to accomplish, and the way the debate is currently going they’ll understand even less by the time the election rolls around.

Because instead of a policy we’ve had this very weird process in which Cullen’s report is made public, but instead of responding to it the government now spends literally months in private consultation, while the opposition gleefully savages ‘the government’s’ new tax plan.

Given the realpolitik of capital ownership and voter demographics, Labour are likely to end up with something far less ambitious than Cullen’s proposal which, with its exemption of most residential property, is already a massive political compromise. There is a famous line from Louis the 16th’s Finance Minister: ‘The art of taxation consists in so plucking the goose as to procure the largest quantity of feathers with the least possible amount of hissing.’ Maybe Labour has a grand strategy here that will later reveal itself, but right now it feels like they have reversed this maxim and gone for minimal feathers in exchange for maximal hissing.

Here is my favourite ironic historical tax anecdote. Milton Friedman, Nobel prize winner and one of the intellectual architects of neoliberalism worked for the US Treasury department during the Second World War. Part of his job was to find ways to raise new tax revenue. Most of the government’s income back then came from tariffs and excises on booze, tobacco etc. In order to tax income, the tax department had to chase countless individuals around and try and claim a proportion of their wages, which they’d inevitably already spent. Income tax was too difficult and expensive to work as a revenue stream.

Friedman’s big idea – which he regretted for the rest of his life – was withholding tax. Instead of trying to collect tax off individuals after they’d been paid you taxed them via their employers, before they got paid. This is a frictionless form of taxation: most people don’t really notice it’s happening. It was justified as a wartime measure, but withholding turned out to be such a great way to tax people it continued into peacetime and was copied by almost every other government in the world, thus financing the great free market welfare states of the post-war period, which Friedman then spent the rest of his life plotting to destroy.

The neoliberals learned a few key lessons from this. One is that emergency justifies change:  the notorious shock doctrine. Maybe that’s how we eventually get a capital gains tax. Maybe there’s a market crash or some other catastrophe, and desperate times call for desperate remedies. The other classic neoliberal tactic is that frictionless change – change that most people don’t really notice – can be revolutionary change. If you shift key economic metrics slowly, a percentage a year over many years, you transform your society in such a way that the transformation seems normal. Which is exactly what’s happened with home ownership and tax free capital gains.

So maybe another way we get to a fair tax system is a tax on capital at the really high end, so that only a tiny fraction of the wealthy pay it, and the rest of us slowly drift up into it over time. Or maybe they find a way to tax capital gains frictionlessly, instead of demanding 33% of the gains when you sell a house? Yes, these would be terrible ways of changing a deeply unjust system, but terrible change is better than no change or meaningless change, which feels like the current trajectory.