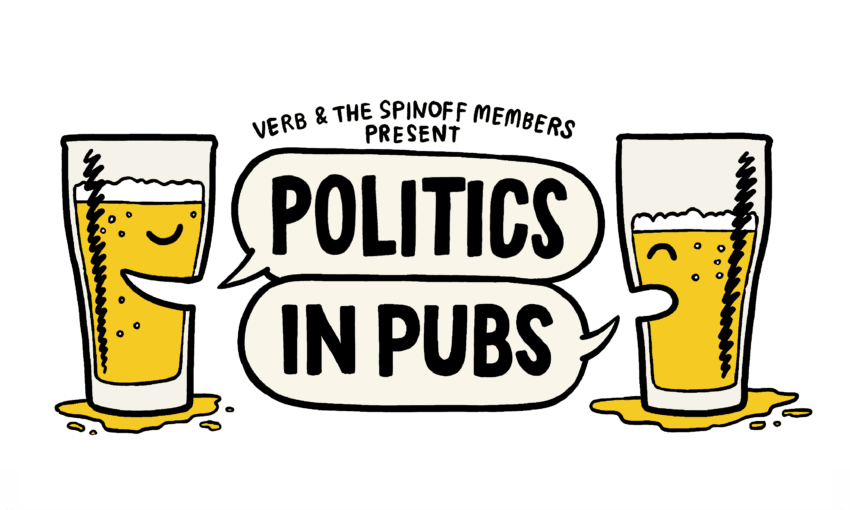 Politics in Pubs: a new series of live events for election year

The series, a collaboration between Spinoff Members and Verb Wellington, kicks off with a discussion on politics and the media.

As all right thinking people know, there are a mere 204 days until the general election. To get in the mood, we’re launching a new series of live events. And not just events: events in pubs.

The idea stems out of a couple of sessions at LitCrawl in 2019: one on socialism and another on neoliberalism. Both went down very well, with a sweet mix of intelligent discussion, audience questions and moments of mayhem. One of those sessions was a very entertaining discussion between Danyl Mclauchlan and Matthew Hooton, held in a bicycle shop. It was a lot of fun, and Danyl and Claire Mabey and Andrew Laking from Verb Wellington (who run LitCrawl) and our lot at The Spinoff got talking and so Politics in Pubs was born.

They’ll run monthly from March at Meow in Wellington. Apart from anything else, given the demise of Back Benches (RIP), it’s an important public service to revive tavern-based political chat.

The event will live beyond the night, too: Danyl will write up something of a match report, and brood on the subject more broadly, too, in a post we’ll run on this very website.

First out of the traps is a conversation on two of the greatest, evilest things in the world: politics and media. Danyl talks to Andrea Vance, the award-winning, always insightful Stuff journalist, and Neale Jones, former chief-of-staff to the Labour leader and now director of Capital Government Relations and a very smart commentator. They’ll discuss algorithms, campaigns, misinformation, social media, and who can say what else.

And, yes, we know there is a world outside Wellington: we’re currently looking at what else we might be able to rummage up.