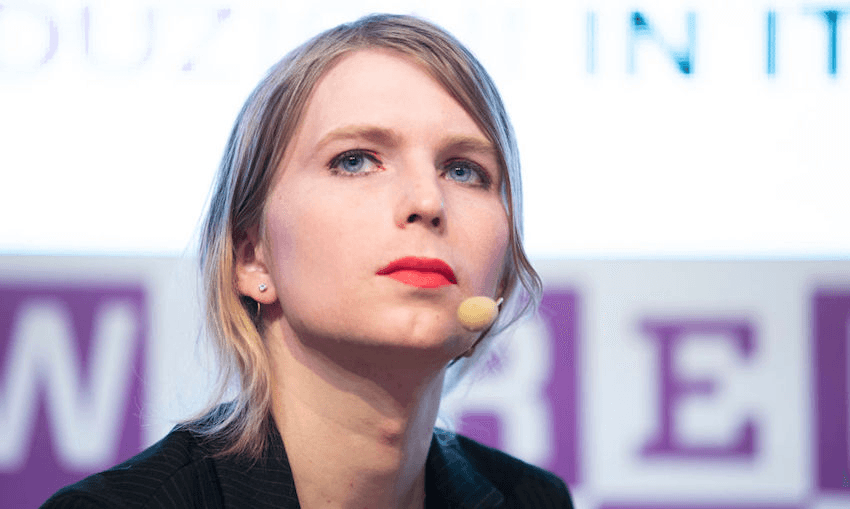 US intelligence whistleblower Chelsea Manning attends Wired Next Fest on May 27, 2018 in Milan, Italy. (Photo by Rosdiana Ciaravolo/Getty Images)

It doesn’t matter what I think of Chelsea Manning. Let her in.

US intelligence whistleblower Chelsea Manning attends Wired Next Fest on May 27, 2018 in Milan, Italy. (Photo by Rosdiana Ciaravolo/Getty Images)

Whether you’re on the left or right, it’s obvious that Manning should be allowed to speak in New Zealand, argues Act leader David Seymour. And the same goes for Molyneux, Southern and Brash.

Here we go again. Another polarising person who will infuriate at least half the population is having their right to speak challenged. If you believe that freedom of speech is one of the most essential features of our society, then I hope you’re ready to defend it again. It doesn’t matter what you think of Chelsea Manning. I only know who Chelsea Manning is because in 2013 I worked for the (very much unrelated) Manning Foundation and news alerts were less precise back then. The point is it’s up to each of us to decide what we think without our access to information being censored by some busybody third party.

First the technicalities. Yes, Manning is a convicted felon. Yes, admitting her is up to ministerial discretion. Yes, she should be treated the same as anyone else. The reason I have taken the position that she should be admitted is that ministerial discretion should depend on the public interest. It is in New Zealanders’ interest to be able to hear the views of important figures in recent global events and make up our own minds about them.

It is not in New Zealand’s interests, as National’s Michael Woodhouse has suggested, to become a client state of the U.S., making decisions based on what Michael guesses will please them. It might be in New Zealand’s interests to bar a person likely to harm New Zealanders, such as a sexual predator, but the idea that Manning will repeat her crime here – embed herself in the New Zealand Defence Force, gain access to classified information, and send it to Wikileaks – is absurd. Altogether, the minister should let her in.

I absolutely support Chelsea Manning’s right to come here and speak. While I may disagree with her past actions, the free exchange of ideas is fundamental to a democratic society. We must protect it. https://t.co/Y5hHvD18ge

Of course, this is a relatively simple case. Should the minister let her in or not? The Stefan Molyneux/Lauren Southern and Don Brash sagas did not involve entry to the country. That was granted by the minister for the Canadian pair, and a birthright for Brash.

These other cases were more difficult, because they brought into play the trade-off between health and safety on the one hand and freedom of speech on the other. The new health and safety laws passed in the wake of Pike River have terrified people, from corporate board rooms to classic car club committees. In fairness the minister’s intention was to make people more accountable, but one of the unintended consequences is that health and safety becomes a water-tight excuse for a multitude of sins.

Massey University vice chancellor Jan Thomas won’t be getting an Oscar or any other sort of award for her pathetic pretence that she banned Don Brash due to health and safety reasons. Auckland Council’s consideration of health and safety concerns with regard to Molyneux and Southern was similarly superficial. They never even entered into a dialogue with the event promoters about how any risks might be managed.

That is the issue that must be resolved. We must establish that health and safety is not an excuse to block unpopular speakers. Either the courts or Parliament must establish how health and safety obligations are discharged when freedom of speech rights are engaged. If they don’t, then seemingly anyone can stop speech going ahead: I will simply issue a few threats, and get the next Green Party conference called off so I don’t have to hear about them spouting their usual nonsense. Ridiculous? That’s what happened with Brash and Massey.