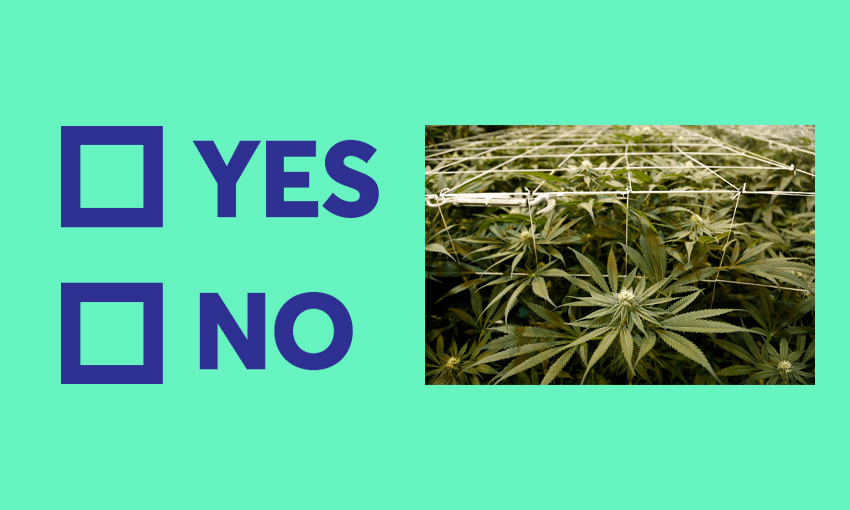 When will we know the cannabis and assisted dying referendum results?

And what do the results in the general election tell us about how they might go? Toby Manhire weighs it all up.

When do the results come through?

The latest instalment in the time-transcending New Zealand election campaign comes this Friday, October 30 at 2pm when the Electoral Commission will reveal the preliminary results in the two referendums. Voters were asked “Do you support the End of Life Choice Act 2019?” and “Do you support the proposed Cannabis Legalisation and Control Bill?”

It’s a big day in a slow week for politics. With the shape of any Labour-Green government deal also set to be revealed, The Spinoff is very earnestly calling it Super Friday.

Why only ‘preliminary’ results?

The final results, together with the final results of the general election, will be revealed a week later. These final results will include “special votes”. Predicted to number 480,000, specials include votes cast overseas, votes cast by people who’d just enrolled (for the first time people were allowed to enrol and vote on election day itself) and votes cast at a booth not designated to serve the voter’s electorate. But more on those later.

What does polling tell us?

As far as the assisted dying referendum is concerned, the support in public polling has been overwhelming, with all but one poll showing more than twice as many people would vote yes as those who’d vote no. The tightest poll was the most recent: a Colmar Brunton survey for TVNZ put yes at 60%, no at 33% and undecided at 7%. When you consider the poll was conducted between October 10 and 14 while advance votes were flooding in, this one is a done deal.

What about the cannabis referendum?

Much tighter. The polling has been volatile. That same Colmar Brunton poll, published on October 15, put the yes vote at 41% and the no vote at 51%.

Polling by UMR as part of its omnibus survey published earlier in the month, however, presented a different picture: 49% in favour and 45% against.

Another poll, conducted in mid-October by The Navigators for the Green Party, offered similar results, with about 45% in favour and 43% against, although it suggested at the point of polling (Oct 9-12) the no vote was likely to be a nose ahead of yes in advance voting.

The Colmar poll surveyed people via landlines and mobile phones, whereas the other two were conducted online. In both cases, the polls were demographically weighted, but it’s trickier to weight when you have fewer historical benchmarks – unlike party preference polling, where there is a stack of historical data.

Do the general election results offer any clues?

That October 15 Colmar Brunton poll put Labour on 46% and National on 31%. Election night results put Labour three points higher than that, with National four points lower. This offers some hope for yes advocates, given that Labour voters, according to UMR research, are more than twice as likely to vote to support the cannabis legislation than National voters.

Linked to that is the increase in turnout – estimated to be at about 82.5% in 2020. A higher turnout suggests higher voting rates among younger people, and 62% of people aged 18-29 were found by UMR to support the change.

Yes supporters are also hoping that examples abroad are repeated here. In the referendum in Washington state, for example, polling “pretty consistently had the yes vote underestimated”, Kathy Errington of the Helen Clark Foundation, which supports a law change, told The Spinoff. “Whether that’s because people didn’t say they supported legalisation because it’s stigmatised or because polling on referendums is so difficult, we don’t know.”

Will we know on Friday for sure?

And it’s a fair bet the domestically cast special votes will be young-heavy. A big chunk of special votes come from people who enrol during the advance period, or – for the first time – on election day itself.

The special vote tally has never been higher. The Electoral Commission estimates 480,000 but it could be more.

My guess is that the special votes could go two yes for every one no, so if my maths is right, a win for the no-vote by anything less than 160,000 or so in Friday’s preliminary result will make the final results, a week later, a nail-biter.

What comes after the final results are in?

Assuming the assisted dying bill gets the nod, the End of Life Choice Act 2019 will become law.

The cannabis legalisation and control bill won’t, though; it still needs to go through parliament. It’s a safe bet, however, that a Labour majority parliament will make it so.

Oh, and we’ll get to hear how Jacinda Ardern voted.

Either way, one side on the cannabis debate can celebrate a win and we can all move on.

Nah. Errington again: “I don’t think for the general cause of drug law reform there’s cause for great celebration or great despair either way.” Those that vote no were not, she noted, necessarily voting for the status quo, and there would be ongoing pushes for decriminalisation and depenalisation if a vote against legalisation was to prevail.

And if yes were to win, Errington says “there are a lot of next-steps and problems that could arise”. On this, she pointed to Colorado, which post-legalisation saw “zero-tolerance drug testing policies” introduced after pressure from businesses. Given the length of time cannabis remained in the system compared with synthetic drugs, “zero-tolerance policies are the same as prohibition in the sense that any use at all could lead to being fired … So the way prohibition based approaches drive people towards harder and more dangerous drug use could remain a problem if we go in the direction of widespread workplace drug testing not linked to impairment/performance concerns,” she said.

“Either way, I think this thing isn’t over.”