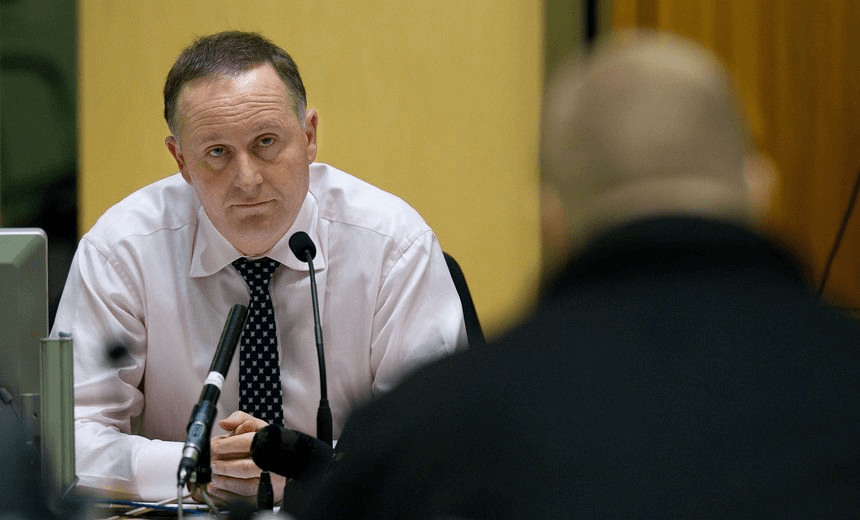 Megaupload founder Kim Dotcom (R) speaks as he comes face to face for the first time with New Zealand Prime Minister John Key (L) as lawmakers examine a controversial proposal allowing intelligence agencies to spy on local residents at Bowen House in Wellington on July 3, 2013. Dotcom is in parliament to argue against the proposal at a select committee hearing chaired by Key. AFP PHOTO / MARTY MELVILLE (Photo credit should read Marty Melville/AFP/Getty Images)

Today’s big NZ story that you probably missed, aka a victory for bullshit and delay

Megaupload founder Kim Dotcom (R) speaks as he comes face to face for the first time with New Zealand Prime Minister John Key (L) as lawmakers examine a controversial proposal allowing intelligence agencies to spy on local residents at Bowen House in Wellington on July 3, 2013. Dotcom is in parliament to argue against the proposal at a select committee hearing chaired by Key. AFP PHOTO / MARTY MELVILLE (Photo credit should read Marty Melville/AFP/Getty Images)

A startling story that appears to contradict John Key’s 2014 account of the abandonment of a surveillance scheme is a bombshell – and a depressing object lesson in delay tactics and attention spans, writes Toby Manhire.

So the saying goes, three years, two months and a couple of weeks is a long time in politics.

Back in September 2014, questions around state surveillance in New Zealand were front and centre of a vaudeville election. The GCSB, the NSA and the 5 Eyes Alliance made regular appearances in headlines, usually channeled through the not-yet-boring Kim Dotcom, with the crescendo arriving in the Auckland Town Hall and the Moment of Truth.

The most serious allegation made that night related to a scheme code-named Speargun. Documents released by Snowden, a former NSA contractor – and published by Greenwald on the Intercept – outlined a programme centering on a “cable access” tap, which would allow mass surveillance of internet traffic flowing in and out of New Zealand.

Just days out from winning his third term as prime minister, John Key rubbished the claims. In a statement issued as crowds rolled into the Town Hall, the PM produced documents showing, in his words, that the claims were “simply wrong” and “based on incomplete information”. He had personally put a stop to developing this “highest form of protection” in March 2013. Key said: “The business case for the highest form of protection was never completed or presented to Cabinet and never approved. Put simply, it never happened.”

With that – and a little help from the epic distraction of a not-very-plausible email that was purported to show a Sony executive doing a deal with Key around Hobbit laws and the villainous Dotcom – the wind was to a large degree taken out of the story. End of. Put simply, it never happened.

Three years and a quarter years on, however, the credibility of that position has been freshly tested, with a major scoop from David Fisher, the indefatigable reporter on Dotcom and NZ snoops.

Documents published by the NZ Herald today show, in Fisher’s summary, that “development of Speargun continued after the time [Key] had said he ordered a halt – apparently because the scheme was ‘too broad’”; that “Speargun wasn’t actually stopped until after Key was told in a secret briefing that details were likely to become public because they could be in the trove of secrets taken by NSA whistleblower Edward Snowden.”

On the face of it – and Key has not yet responded to Fisher’s request for comment – this is dynamite. If the then prime minister, who had promised to resign if he were found to have presided over mass surveillance of New Zealanders, did indeed only kibosh the project after he got wind that it could be exposed in Snowden leaks, he has gravely misled the New Zealand public.

But as far as the coverage today goes, this is a Tom-Thumb kind of dynamite. At one time Fisher’s piece would be dead-cert for the front-page splash. But the article, which runs to 1500 words on the Herald site, doesn’t make today’s print edition at all. Nor has it yet been picked up, as far as I can see, by any other media outlet. National broadcaster RNZ? Not a sausage.

And who can blame them? We’ve moved on, haven’t we? There is a new government to get to grips with. Fresh dramas. A toddler Michelin Man in the White House. A royal wedding.

Nor is there an opposition for this. The government minister now responsible, Andrew Little, hasn’t replied to Fisher’s requests for comment. It’s less straightforward, of course, to assail the security agencies when you’re at their helm. The National opposition are hardly going to start interrogating the government over whether the former PM Sir John Key was bullshitting New Zealand. Maybe the Greens have the cojones to follow it up. David Seymour, come in!

At the end of the day – as one former statesman used to put it – the deeply depressing thing is that what right now seems most profoundly vindicated is not so much Snowden and co, but the tactics of bluster, dissembling and delay. The Herald story rests on requests submitted by Fisher under the Official Information Act – an act which has been made to look a laughing stock over the years, routinely undermined and toothlessly enforced. Those OIA requests were bounced back and forth around officialdom, held up and doused down for as long as a thousand days.

What a shame it would be if the lesson of all this was that all you need do is waste enough time until everyone has something else to worry about.