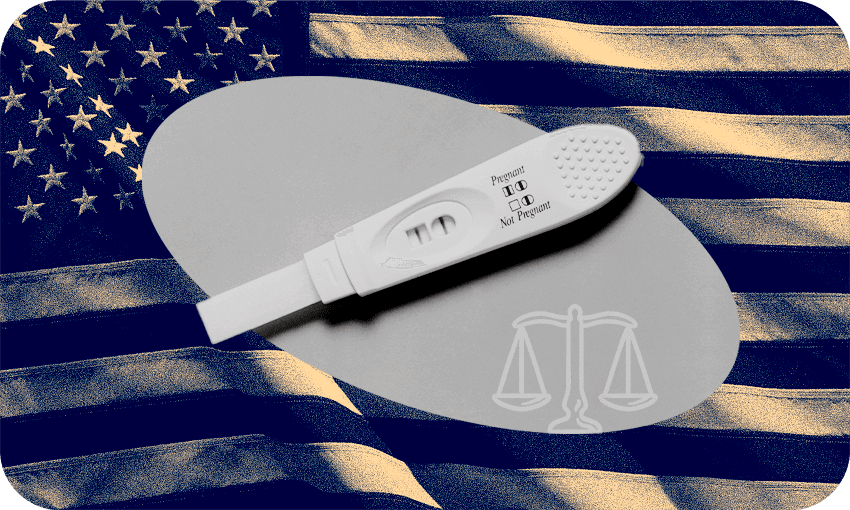 The overturning of Roe v Wade denies women agency to choose what happens to their bodies and their lives. And, as Joanna Bennett writes, its effects will extend to pregnant people miscarrying as well as those seeking terminations.

It started with disbelief, bouts of nausea, and recurring waves of both panic and excitement. It ended with a trip to the hospital, and a visceral, bottomless sadness.

I wasn’t having an abortion; I was having a miscarriage. It wasn’t my choice, but my body was still terminating the pregnancy.

The morning after my miscarriage, I’m having the surreal experience of watching Roe v Wade get overturned in America and given access to a new perspective. I’m now a person who has felt life begin inside them. Creating a human – no matter if it were an unwanted accident or desperately longed-for, six weeks or full-term – is a life-altering experience.

Before I got pregnant, I thought miscarriage happened like it did in the movies. Sudden blood loss, a woman crying on the floor of a bathroom, and then it’s over.

But as with all things concerning women’s health, it’s nothing like this. Before becoming pregnant, I had no idea that there is virtually no clinical difference between miscarriage and induced abortion – only a word, and a choice.

For me, there were early days of bleeding while the pregnancy could still be viable, and a horrific waiting game of busying myself with work, all the while wondering if something could be dying inside of me. My right arm became a veritable pin cushion for blood tests to chart the rise and fall of something called human chorionic gonadotropin, and doctors felt around my abdomen to check whether the embryo was growing in a fallopian tube instead of my womb.

I was also confronted with medical decisions I had never been warned of or expected: whether this will be a “natural” miscarriage – one that simply runs its course – or if it would need to be drug-induced with side effects of vomiting and fever, or maybe I would require a D&C, which stands for “dilation and curettage”, surgery to get the foetus out and complete the process.

The overturning of Roe v Wade in the US denies women agency to choose what happens to their bodies and their lives. We know that banning abortion does not stop it happening, and forced pregnancy can cause serious physical and mental harm. But it also has a potential flow-on effect to how those experiencing pregnancy complications are treated, including miscarriage – a shockingly common experience that can affect 25% of all pregnancies, and 15,000 New Zealanders each year.

In places with restrictive abortion laws, pregnant people who are miscarrying, and need medical intervention, could struggle to get access to surgery (such as D&Cs) and the medication required to complete it. There are already reports of women in restricted states and suffering pregnancy complications, facing the prospect of driving across state lines – sometimes as long as 12 hours – for emergency surgery, while in severe pain.

Medical experts in restricted abortion areas in America discuss a possible situation where miscarrying people may have to “gradually tolerate” a worsening situation until it becomes untenable or the “scales tip” in a direct threat to their life – a distressing reality for one woman who experienced this in Malta last week. Or where the pregnant person may be interrogated to check for intentional miscarriage. This is not The Handmaid’s Tale – a dystopian nightmare dreamed up by Margaret Atwood. This is a dark reality in America in 2022.

Some may think the overturning of Roe v Wade has no impact here in New Zealand – in 2020, parliament voted to decriminalise abortion (by a slim margin). Prime minister Jacinda Ardern approved legislation for paid miscarriage leave last year. We are safe in our tiny island nation. But we can’t ignore that it’s rare in modern times for a country as influential as America to move in a direction that increases restrictions on half of its population. This is a much bigger, global story about women’s healthcare and how we are treated in the medical sphere.

In New Zealand we have Christopher Luxon, leader of the opposition, standing in the wings. Luxon has been vocal in his “pro-life” beliefs, and several other National MPs have expressed similar sentiments on the issue this week. This week Luxon relayed to media that the abortion law in New Zealand is settled and will not be changed – but it’s hard to forget that associate justice of the Supreme Court Brett Kavanaugh also denied any likelihood of relitigating Roe v Wade in 2018.

Like a lot of experiences in early pregnancy, my miscarriage was both anxiety-inducing and completely foreign. I was lucky I had the full support of a partner and the kind and supportive New Zealand healthcare system behind me. But I worry for 36 million women in America and the 300,000 already pregnant, both choosing to terminate their pregnancies, and those losing them unintentionally, bearing this extra burden. This decision, like many when it comes to reproductive health and information, is ultimately decided by men – whose own bodies will never experience the inimitable physical and emotional experience of pregnancy.

In Latin, the word abortion can be traced back to abortionem – meaning “a product of untimely birth” – and aboriri “to fail, disappear, pass away”, a compound word used for deaths, miscarriages, and sunsets.

As anyone who has tried to get pregnant will attest – everything is about timing. And just as timing cannot be right for a baby, it can also be untimely for a pregnant person, for a multitude of reasons. As we watch from afar, we must stay vigilant to maintain a system that protects all women and pregnant people, and our fundamental right to proper healthcare.