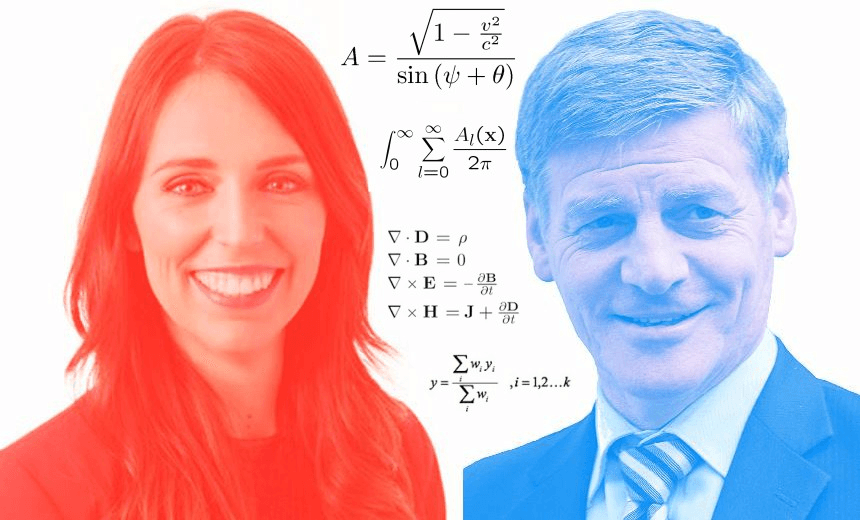 Political scandals are popping up everywhere but what the people really want is cold, hard stats. So Madeleine Chapman went along to the Labour and National campaign launches and crunched only the most important numbers.

Campaign launches. How important are they in an election? This is a genuine question because, until recently, I’d never been to one or even knew they existed. But I went to both the Labour and National launches this year as part of an effort to finally become politically literate. While journalists whose job it is to inform me about politics scribbled serious notes at the media table, I collected data on the important stuff like how many times people laughed during Jacinda’s speech.

As an up-and-coming* political* voice*, I will cast my personal allegiances aside and let the data speak for itself.

Labour apparently booked the town hall as their venue intending to have Andrew Little as party leader at the launch. Who knows if they’d have gone bigger for Jacinda but whatever the case, the town hall was filled to capacity (1400), as was the concert chamber (approx 450) and Q Theatre next door (350). In a complete flip, National went big by setting up Trusts Arena but weren’t quite able to fill all 2500 seats. Silver lining to that cloud is everybody had plenty of personal space.

Bill brought two of his own children, Maria and Xavier, on stage and they looked like they had consciously decided to be there. Jacinda had about 20 kids on stage at once but they were part of a choir and therefore may not have even known what the hell was going on. I sung in a primary school choir and we used to perform at rest homes without fully knowing what a rest home was. Singing at a Labour launch is probably the same as that.

When I arrived at the Labour launch, I walked in the door, mumbled about being media, and was directed inside. The National launch had more security, as is probably to be expected from the governing party, but I was confident and ready, only to then be owned twice in quick succession. Trusts Arena in Henderson is located right next to the Douglas Track & Field stadium, and on Sunday there was a rugby league match being played. I walked passed the supporters on my way to the front gate to announce my arrival as media. The security guard very quickly told me to head down to gate one. I have competed at the Douglas Track a bunch of times and know very well that gate one is the back entrance to the track, not Trusts Arena. But I wandered down anyway and was promptly told that no, media for the National Party event were not supposed to go there.

When I told the guard back at the gate that he’d sent me to the rugby, he was surprised. “Oh, you’re not here for the rugby? You’re here for this?” He pointed back through the very same gate that I’d been trying to enter, at the milling National supporters. Yes, I said. “OK, maybe go down to gate three then.” Gate three was in fact the correct entrance and after speaking to the man with the clipboard, I was waved through only to be immediately halted by a policeman. “Whoa, whoa, whoa, if you’re here for the gym you can’t come in this way.” I was a little flattered that he thought I was someone who goes to the gym and mostly annoyed that people kept thinking I had gotten lost on the way to some sort of physical activity.

Jacinda’s speech, at 3354 words, was actually longer than Bill’s 3004, and yet her speech was shorter. Maybe he got more laughs?

Nope. Although I’ll concede one point. Brown (Pasifika and Māori) people laugh a lot louder than white people, and there were definitely more brown people at the Labour launch than at the National one so maybe the results are skewed. There was so much polite dinner party laughter at the National launch it made me uncomfortable because I’m not good at laughing at dinner parties. But who cares about not getting the laughs if you’re getting the huge rounds of applause, right?

After the Labour launch I wrongfully assumed that launches aren’t where policies are announced. Well call me an ass because Bill went right out there and dropped an education policy into our laps. It sounded great in the speech and then it sounded terrible in the press conference afterwards but, hey, he announced a policy and Jacinda didn’t. And that probably means something but I don’t know what.

A statistic I never thought I’d have to record.

Every Mexican wave started and ended with the small Samoan contingent at the National launch.

The only personal allegiance I’ll disclose is my allegiance to The Doobie Brothers. National had a house cover band playing all their music as people arrived and they performed two Doobie Brothers hits (‘Listen to the Music’ and ‘Long Train Runnin”) in ten minutes. It was a highlight. It also made me realise how important music is to set the tone. While National chose a live New Zealand band playing international songs, Labour went for a playlist of New Zealand songs played over the speakers. Each had one outlier – Labour had one live cover song in Hollie Smith’s ‘Beautiful People’ and National had one original(ish) recorded song in their campaign jam ‘Get It Together’. Below are the full* playlists from each party (*full, meaning all the songs I heard and remembered to write down).