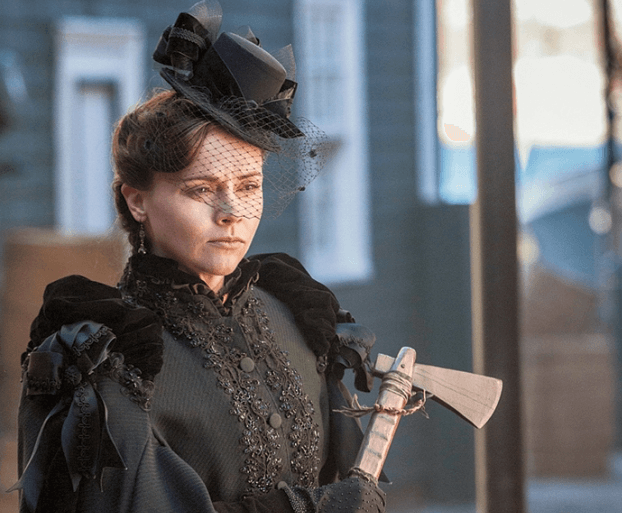 Appointment Viewing: The Bloody Pulp of The Lizzie Borden Chronicles

Lizzie Borden was a real life human animal – a perfect internet-era celebrity who just happened to be born a century or so too soon. She grew up relatively wealthy in a small Massachusetts town, doing normal 1800s kid’s stuff like joining temperance leagues and mucking about with pigeons, until her father and stepmother were brutally hacked to death with an axe in 1892.

All eyes were on the hot-tempeted Lizzie, who had a variety of good reasons to get hacking. She was charged with “feloniously, willfully and of her malice aforethought, an assault did make, and with a certain weapon, to wit, a sharp cutting instrument… did strike, cut, beat and bruise, in and upon the head of him…” You get the idea. The sentence is approximately 100 comma-strewn feet long, and says that Lizzie Borden caved in her folks’ heads with a hatchet, leading to the creation of a now-classic morbid children’s rhyme:

Lizzie Borden took an ax
And gave her mother forty whacks.
When she saw what she had done,
She gave her father forty-one.

There was all kinds of very compelling, though mostly circumstantial, evidence to suggest she did the deed. But the police made a horrendous The Jinx-style hash of the investigation, and a jury acquitted her. Thereafter she made the remarkable decision to live on in Fall River until her death of pneumonia at 66.

The Lizzie Borden Chronicles is a Lifetime miniseries which covers her life after the trial, living in the fashionable part of town but entirely ostracised by polite society. It stars Christina Ricci as Lizzie, a beautiful but quite mad young woman – a massive lungful of fresh air as a trashy anti-heroine lead in this serious anti-hero plagued era.

Lifetime is known for its tragic biopics – everyone from Aaliyah to Liz Taylor has gotten the treatment. They’re TV events in the US, enjoyed as much for their corny casting as their windows into the lives of notorious and doomed Americans. Lizzie Borden takes elements of that style – an infamous life and extreme liberties with the facts – but is clearly the channel’s most ambitious work yet. If you’ve found the last few year’s worth of Golden Age a little pompous at times – particularly the reverential historical stuff – then you’ll revel in Lizzie Borden.

Ricci is perfect for Borden, playing her with a combination of butter-wouldn’t-melt innocence and unholy fury. While starting post-trial seems odd at first – explained via the mini-series following a made-for-TV movie with the same cast – it works thanks to the insane dynamic that is her continued residence in the town. The violence is pleasingly gratuitous, and it has a little of the Deadwood-esque element of society-stubbornly-resisting civilisation about it. The cast is great right through, including veterans of both Carnivale and The OC. In fact, thinking of it as The OC in Carnivale’s clothing is a pretty good way to conceptualise the show. Ricci is Ryan Atwood, her sister Emma is Seth Cohen… I’m so sorry.

The script is corny early on, with Lizzie’s brother Billy a particularly generic archetype. Like The Knick, it’s scored with contemporary music which cuts both ways – the bluesy atmospheric stuff is great, but the more song-like vocal pieces jar a little. And while the setting is convincingly evoked, it’s not quite on that ‘smell the filth’ level of Outlander or Game of Thrones.

Lightbox subscribers: The first three episodes of Lizzie Borden Chronicles debut tonight at 6pm, with more arriving weekly express from the US.

Everyone else: hack your way to a free trial right here.