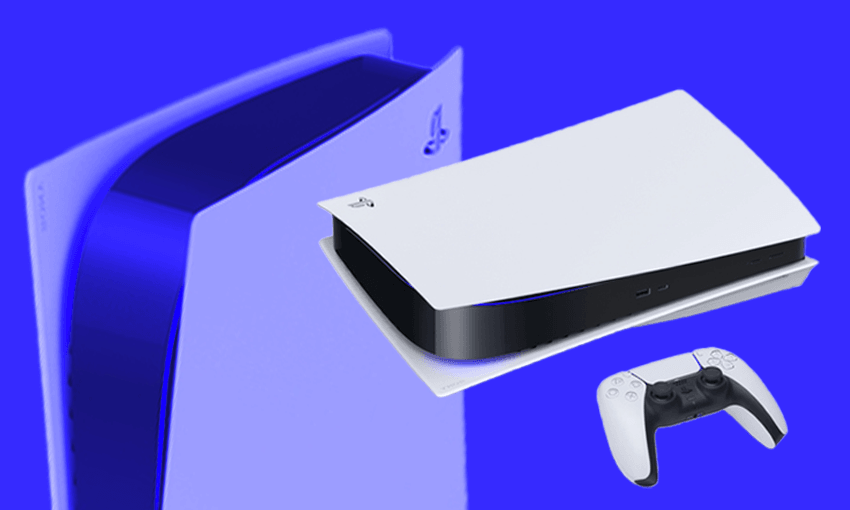 Review: The PlayStation 5 is a delightful big boy of a console

The Playstation 5 is Sony’s hotly anticipated entry into the new generation of gaming. How does the big unit fare?

The first thing you realise about the PlayStation 5 is that it’s one big boy of a console. If you saw this console walking down the street, with its white armour and flashing lights, you’d give way to it. You might even take a photo of it and upload it to Instagram with the hashtag #bigunit or #chungus. Even though it isn’t necessarily any bigger than the Xbox One, it insists upon itself in a different way. It takes up space, beautifully so.

So when I took it out of the box, my deep personal struggle was: where on earth was this chunky fella going to fit?

The PS5 is what I’ll be playing games on for the next five years minimum, but it doesn’t exactly sit naturally anywhere. This is more a problem with my living situation than the console – I can’t blame Sony or its PlayStation for the size of my lounge – but I bring it up because the console’s size is pretty much the only issue I had with the PS5. It doesn’t really fit into any entertainment system, and depending on your lounge, it might just draw attention to itself. The console’s design resembles a Tesla machine (if Tesla wasn’t run by a cryptofascist married to a hyperpop chanteuse), which is to say: I like how it looks. But enough about how the console looks. How does the thing feel to actually play?

Let’s get the obvious out of the way: the PS5 is, at a first glance and a couple of hours’ play, a faster, gruntier console than the PS4. Loading times are fast – you can be leaping around in Spider-Man: Miles Morales mere moments after opening the game up – and the graphics are brighter, better and much smoother than even on the most recent games on the PS4. The real comparison will come side-by-side as many of the early games on the PS5 are also coming out on the previous generation, such as Cyberpunk 2077 and Assassin’s Creed: Valhalla, but there’s nothing to complain about when it comes to the experience of using the console. For the first time, using a console feels as simple and intuitive as using a phone, a sentence I don’t think I’d be writing five, 10 or 20 years ago.

The biggest revolution here, though, is the controller, the DualSense, which provides two leaps forward for the medium: haptic feedback and adaptive triggers. Haptic feedback, or vibration, has for decades remained a fairly rudimentary thing: you get hit, the controller shakes in your hands. It’s effective, but not an exactly subtle form of immersion. It’s blunt, brute-force immersion. Until now, we’ve all been simple dogs, and the DualShock has been Pavlov. The new DualSense controller, on the other hand, is a five-star level of immersion.

I’m old enough to remember, in Metal Gear Solid 1 way back in 1998, when Psycho Mantis asked the player to put the (then new) Dual Shock controller on the ground and then he would vibrate it with his mind. Haptic isn’t quite nearly this ostentatiously thrilling, but it’s one of the most groundbreaking developments I’ve felt in video game tech in some time. The immersion here is like being welcomed into a fancy hotel: you meet the concierge, you get your luggage taken into your room and there’s not only chocolate on the pillow, but an entire masseuse ready to relax you into your room. When playing Astro’s Playroom, which comes built into every PS5, you can feel every step that Astro takes. If you walk, the controller taps lightly with your avatar’s steps. If you run, it taps faster and more intensely. It splits the difference between immersing the player and grabbing the player; you’re taking a dip into a warm spa, not being dunked in a cold pool. The sheer elegance of it is a huge step forward.

This gets taken to the next level with say, Spider-Man: Miles Morales – a genius choice to launch this title with, being built on the incredibly strong bones of PS4’s blockbuster hit, Spider-Man. Every thunk and shot of Miles’ webs as you swing through New York is deeply felt, and while that action was already the ideal balance between zen and thrilling, it’s even more visceral here. It doesn’t just feel good as a player – it gets you into the head of the character as much as you’re ever going to be without the strange uncanny valley of VR, which comes with its own inherent drawbacks.

Beyond the haptic feedback, there are also adaptive triggers. Basically, the little buttons of the top of the controller – L2 and R2 – respond to how you push them. Sony director Hideaki Nashino describes it best: the aim of the triggers is to preserve, or to convey, the experience of doing your character’s actions, whether it’s “driving a car through mud” or “drawing a bow to shoot an arrow”. Again, among the launch games, Astro’s Playroom demonstrates this best, whether it’s walking around as Astro or pulling ropes to open doors; it’s visceral in a way that you wouldn’t necessarily expect from a silly platformer.

This also allows games to mess around with the adaptive triggers (hence the name), to make the player put more pressure on them in certain situations or be much more gentle in other situations. It’s all about immersion, about making the player feel like they’re part of the game rather than a docile observer. It works, and if developers really lean into it – in a way that they didn’t necessarily do with motion controls or the touch pad last generation – then we’re looking at a big leap forward for gaming.

It feels strange to be reviewing a gaming console in 2020 on launch, even as an avowed gamer. It’s like looking at a newborn babe and declaring, up front, that you know what their potential is, all the things they’re going to achieve, and all the mistakes they’re going to make. With a limited amount of games, many of which are likely explicitly designed to showcase the console and what it can do, it’s hard to get a great gauge of what the PS5 means. You wouldn’t judge a human based on the year they had in 2020, so I’ll give the console that I’ve so worryingly anthropomorphised the same grace.

In 2020, I don’t have immensely high expectations of a new gaming console. So long as it plays the next generation of games, looks nice, fits into my lounge without ruining it, and lets me watch YouTube into the deep hours of the night, it’ll be a success to me. So, the PS5 doesn’t have a particularly high bar to clear.

It’s the aspects where the console leaps high above the bar that make me excited for its future though. Haptic touch is a genuine leap ahead, as are the adaptive triggers. We expect graphics to get better, framerates to be smoother and higher, and the console to be generally faster. We also expect some new tech and hope it gets integrated fully into the generation. Motion control wasn’t it, the touchpad wasn’t it, and VR was sort of it. Haptic feedback, though? I think that could be it, and I’m legit excited to see what developers do with it.

The future is uncertain – this might be the last gaming generation ever! What fun! – but based on the time I’ve spent with the PS5 I can say one thing: I love my hefty gaming son and will happily spend the rest of my days with his controller shaking in my hands.

The price point for the PlayStation 5 is $649 for the digital edition (no disc drive) and $819 for the disc-based Playstation 5, and it comes out on November 12, but pre-orders are sold out in many places. The disc-based version was reviewed on a console provided by Sony.